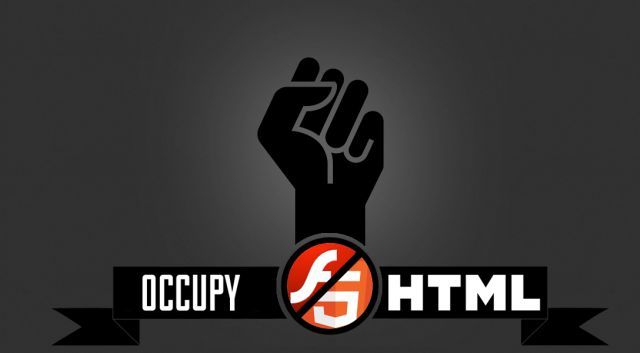 Occupy Flash is a professionally created web site made and supported by an anonymous team dedicated to getting people to uninstall Adobe's Flash Player from their PCs. The group's message (get web site creators to stop making Flash-based sites in favor of HTML 5) certainly generated a ton of comments when we ran the story on Neowin on Monday.

Now yet another web site, again formed by an unnamed team, has launched to counter the message of the Occupy Flash team. It's called Occupy HTML and the site's design and even a lot of its words are nearly identical to the Occupy Flash web site. However, it's a mirror universe version of Occupy Flash in the end. Occupy HTML claims that Adobe's Flash Player should continue to be used by web site creators and that PC users should still install Flash support for their web browsers.

In its manifesto, Occupy HTML says that Flash is "supported by all major desktop browsers. It's stable when used properly. If not, it crashes a lot, just like every other technology. It requires constant security updates, just like every other web technology. It doesn't work well on most mobile devices, and for good reasons. It's a content plugin, developed during the era of closed standards and unilateral corporate control of web technology. Websites that rely on Flash can present a unique (and often unparalleled) experience for the massive percentage of users on a desktop browser. Flash powers some amazing experiences that work consistently across all of the major browsers in a way that cannot be replicated without Flash technology."

Occupy HTML's unnamed organizers claim not to be backed by any company, just like Occupy Flash. The site claims that Flash should not be dumped in favor of HTML 5 but rather have them both coexist for web site creators. It states, "Should you choose to continue using Flash, there will be little or no pain and sacrifice involved in your decision. But the more of us who run browsers that support emerging web technologies, including HTML 5, the quicker our experiences will become even better."