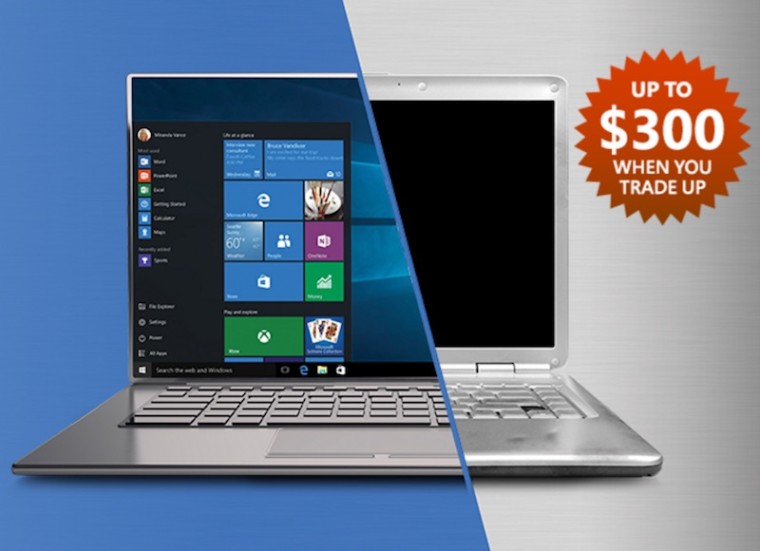 Planning to purchase a new Windows 10 laptop but don't know what to do with your old, existing gear? Microsoft has a solution. The company is willing to pay you up to $300 if you decided to swap your existing machine for a new Windows 10-powered computer. Microsoft is running a new promotion called Easy Trade Up, wherein it is accepting old systems -- up to six years old -- and offering money if you intend to upgrade to a new Windows 10 computer.

Understandably, the exact amount you will receive trading in your laptop will vary in accordance with the kind of system you currently own. The company, however, promises up to $200 on old PCs (Windows systems), and up to $300 on MacBook models. If you’re not sure whether your computer is eligible for this offer, you can check out the eligibility criteria from the promotion page.

To avail the offer, you'll need to purchase the new system from a Microsoft Store on or by next Tuesday, October 20. Furthermore, the minimum price of your new device must be $599. Computers from a range of manufacturers including Dell, HP, Lenovo are available for purchase as part of the promotion. No Surface device is in the offering, however. The offer is currently available in Brazil, Canada, France, Germany, India, Taiwan, the United Kingdom, and the U.S. Interestingly, Linux users can also try their luck.

The process is simple, too. You need to submit your online trade-in claim on the promotion page, and someone from Microsoft will review your application. If approved, you will have to send away your old qualifying machine, and the company will pay you the amount within 28 days of validation of your claim.

The aforementioned promotion is one of many attempts from Microsoft to promote Windows 10. The latest desktop operating system is being promoted left and right. And it is seemingly working too. Earlier this month, Microsoft announced that the install count of the new operating system has hit 110 million.