Ubisoft had a lot in store to reveal during the Rainbow Six Siege Six Invitational tournament today, showcasing what kind of new content and changes players are to expect this year.

2019 will bring in four major seasonal updates to the game as usual, with the first one to land being Burnt Horizon carrying its Australian operators and new Outback map. The new operators have gadgets that can hijack drones and trap defenders. See the video below to find out what exactly they are bringing to the table.

Moving along, the second season will have an American and a Danish operator along with a Kafe Dostoyevsky map rework. Beyond that, the third season will introduce operators from Mexico and Peru, as well as a reworked Kanal. And finally, the fourth season of the year brings in operators from India and Kenya with Theme Park being the map getting the rework.

It's clear that this year the developer has its sights set on improving existing maps rather than adding even more to the line-up. This makes sense considering a vast number of them are unused in ranked games for balance reasons. Mid-season events - similar to Halloween House - for breaking up the pace of this rework-heavy year were also confirmed.

The reworks aren't just for maps either, with Ubisoft confirming that during the first half of this year, both Lion and Glaz are slated to change up their gadgets. The enemy outline that appears when Lion uses his gadget has been nerfed to only show pings of enemy locations, but Lion can use the scan much faster. Meanwhile, Glaz's thermal vision will only kick in when he's not moving, making him more of an angle holder. 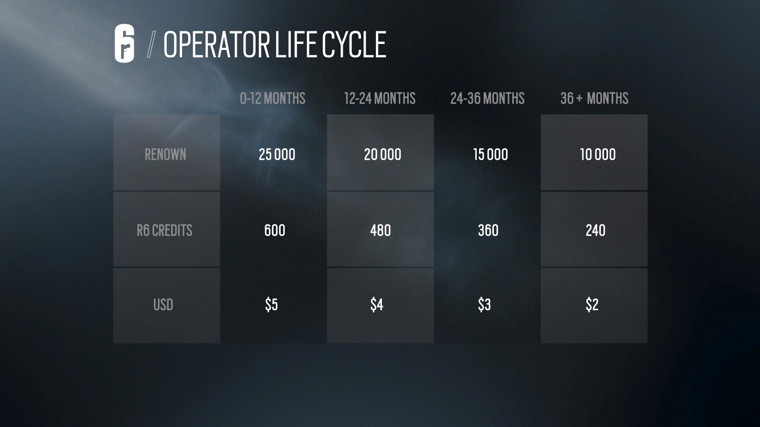 This year will mark the game crossing the 50 operator mark, and Ubisoft is making it easier for players to unlock older DLC operators. The changes apply to both free and premium currencies. See the image above for the full breakdown.

Ubisoft is also tackling teamkilling penalties in a new way in Operation Burnt Horizon, where following a player's first teamkill, any further damage to teammates will be reflected back to the offender, effectively making toxic players kill themselves. The studio is working on a "forgive" system as well.

Other features that Ubisoft teased for Year 4 include a newcomer playlist, changes to casual and ranked playlists to give players more agency, a lean-spam fix, a reworked deployable shield, and much more that we will see in full as every season comes closer to release.

Rainbow Six Siege Operation Burnt Horizon doesn't have a fixed release date just yet, but those who are willing to download the Rainbow Six Siege Test Client can jump in and try out the season starting tomorrow.