Android smartphones were once notorious for consuming battery and not being able to last all day. But, over the last couple of years, handset manufacturers have improved performance in this area with Google taking steps to optimize its Android OS. While numerous handsets can make it through a full day, an external power bank can still come in handy when a power plug isn’t or won’t be immediately available. 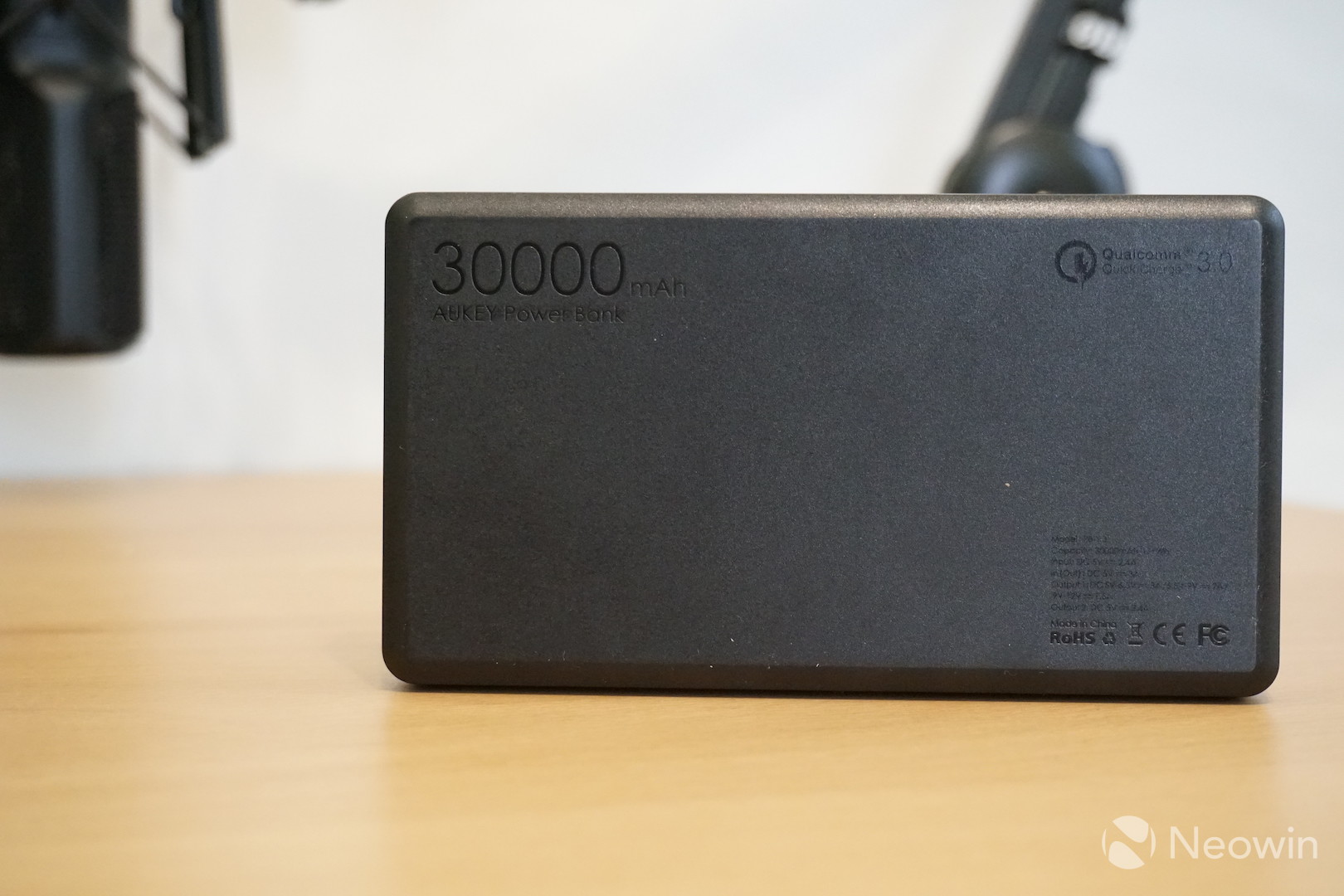 Aukey offers a wide variety of products when it comes to charging, and its latest and largest power bank, the PB-Y3, offers the everything you might need when it comes to charging modern devices. The unit comes in a matte black plastic shell and measures in at 5.9'' × 3.3'' × 1.1''. This isn’t the smallest or lightest (weighs in at roughly 1 pound) power bank you’ll ever use, but it does have some huge advantages for someone that might be off the grid for a while. 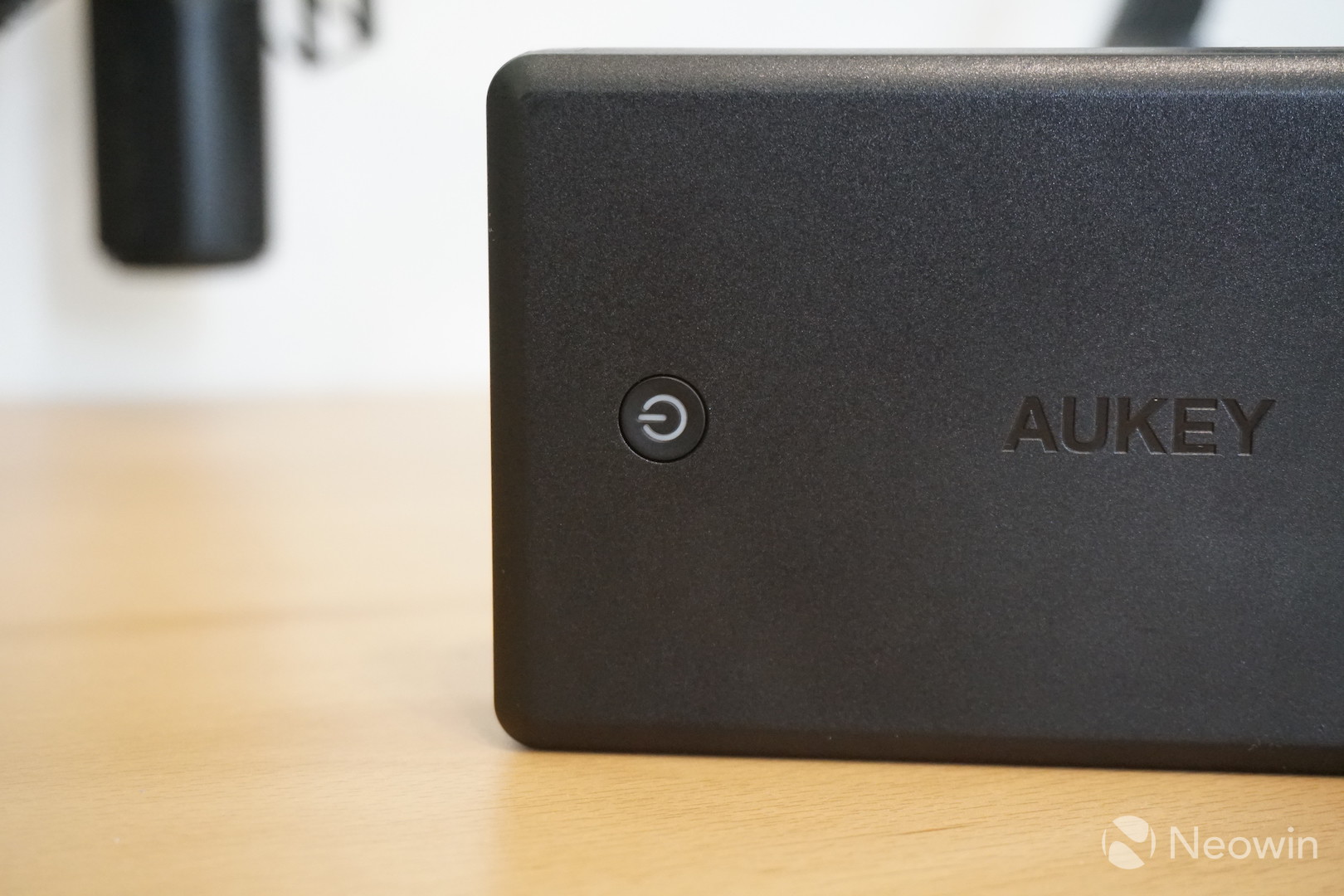 When it comes to the design, this isn’t something that’s going to impress your friends or colleagues when you bring it out, its subtle looks and design are uninspiring, but it gets the job done. While a previously tested model from Aukey offered a relatively solid feel, this 30,000mAh model feels a bit hollow and doesn't feel as well put together. Although the feel of the device isn't as premium as I would have hoped, for the duration it has been tested, everything worked fine and has held up to minor bumps and dings. 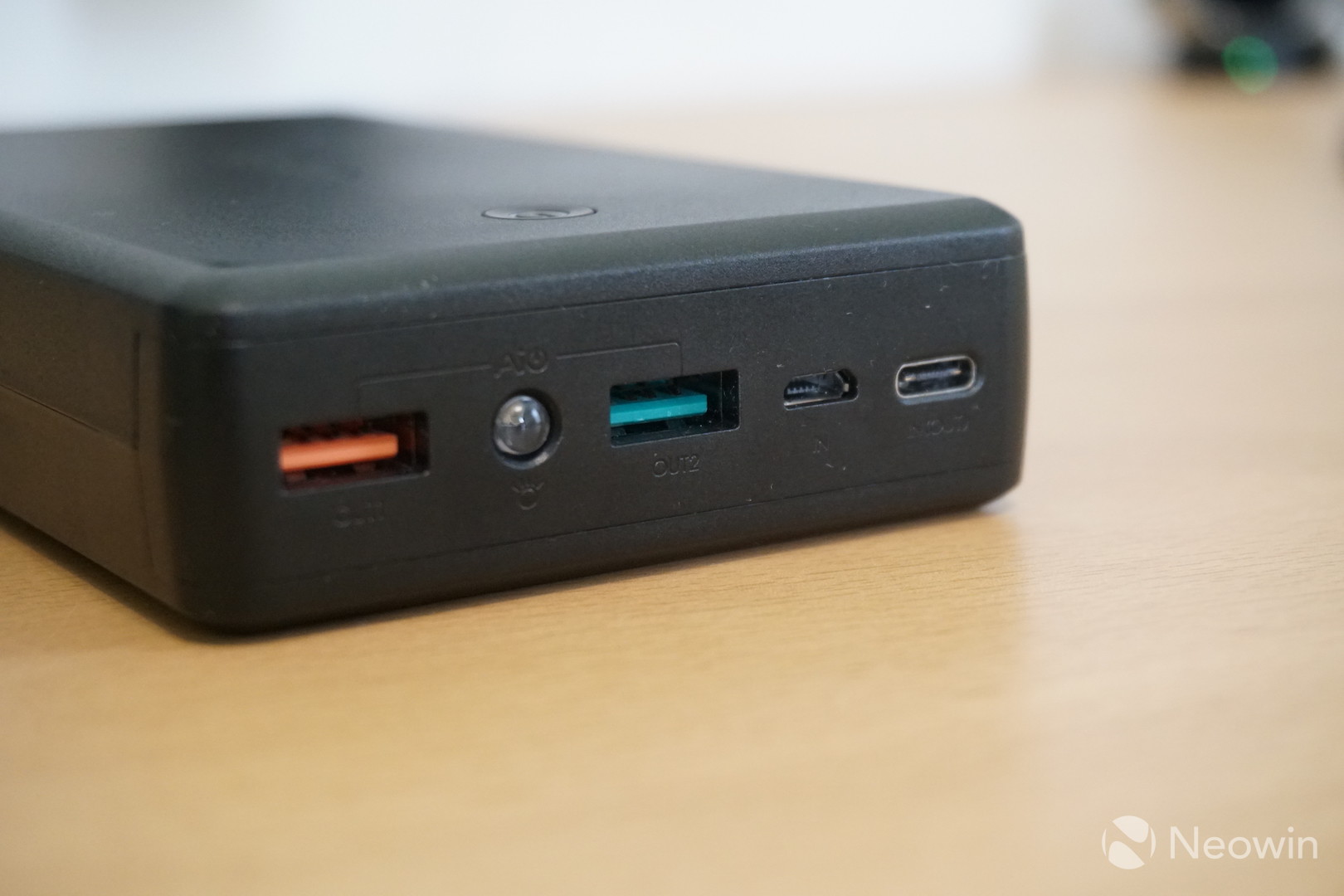 As for ports, this is where the external battery pack differs from previous models offering a USB Type-C port for input and output. This has been very convenient since a majority of smartphones that I have been reviewing or own are now USB Type-C. While there is no issue using a power pack that charges via microUSB, when traveling, you try to keep things as minimal as possible, and the PB-Y3 allows this. The power pack isn’t limited to just USB Type-C and does also offer a microUSB charging port. 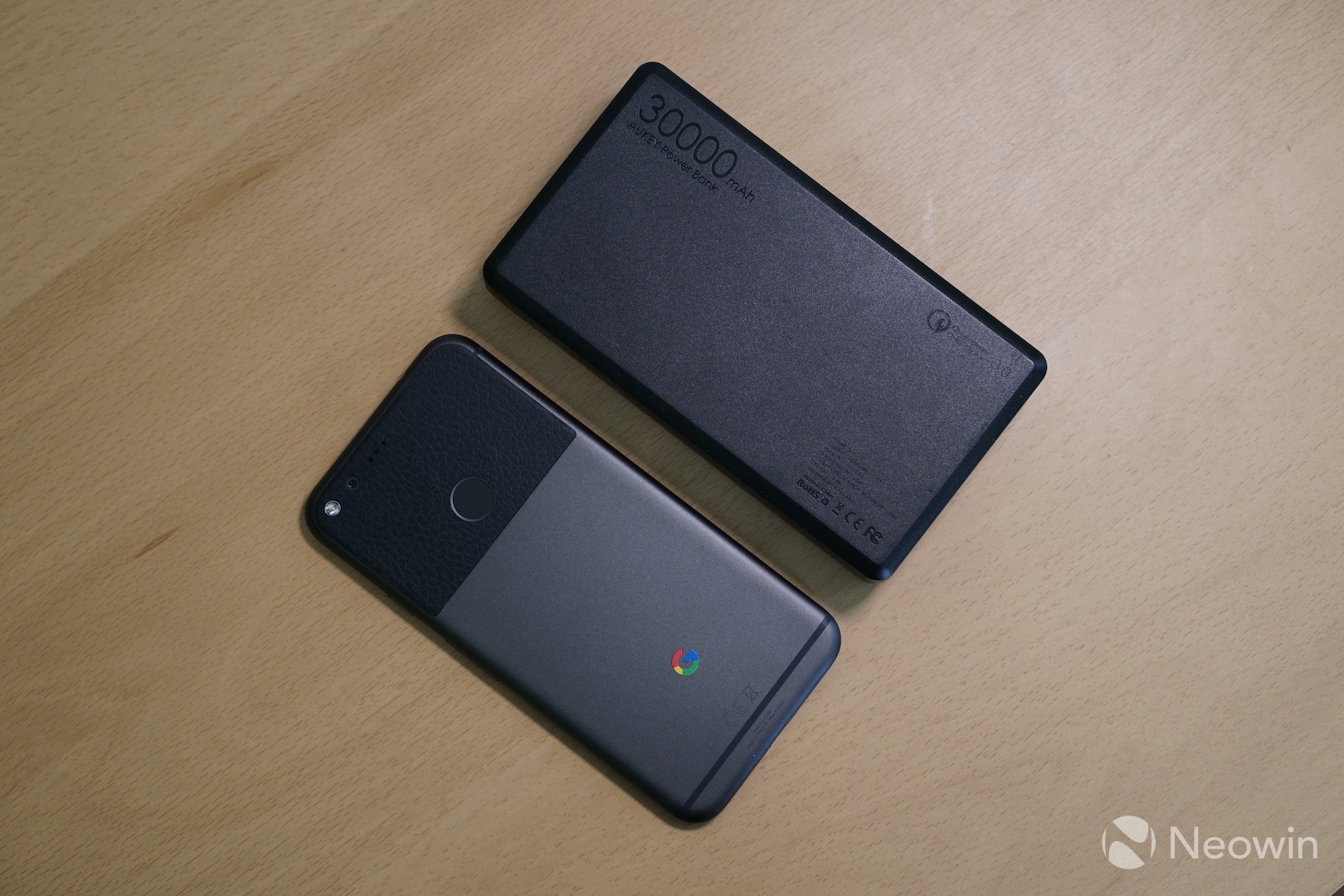 As for alternate charging methods, the device provides two full-sized USB ports - one Quick Charge 3.0 and the other a standard 2.4A port. Both ports work as expected and offer relatively comparable charging speeds to a normal outlet. It isn’t the exact same, but I have no complaints, especially when it comes to the Quick Charge capabilities of the battery. 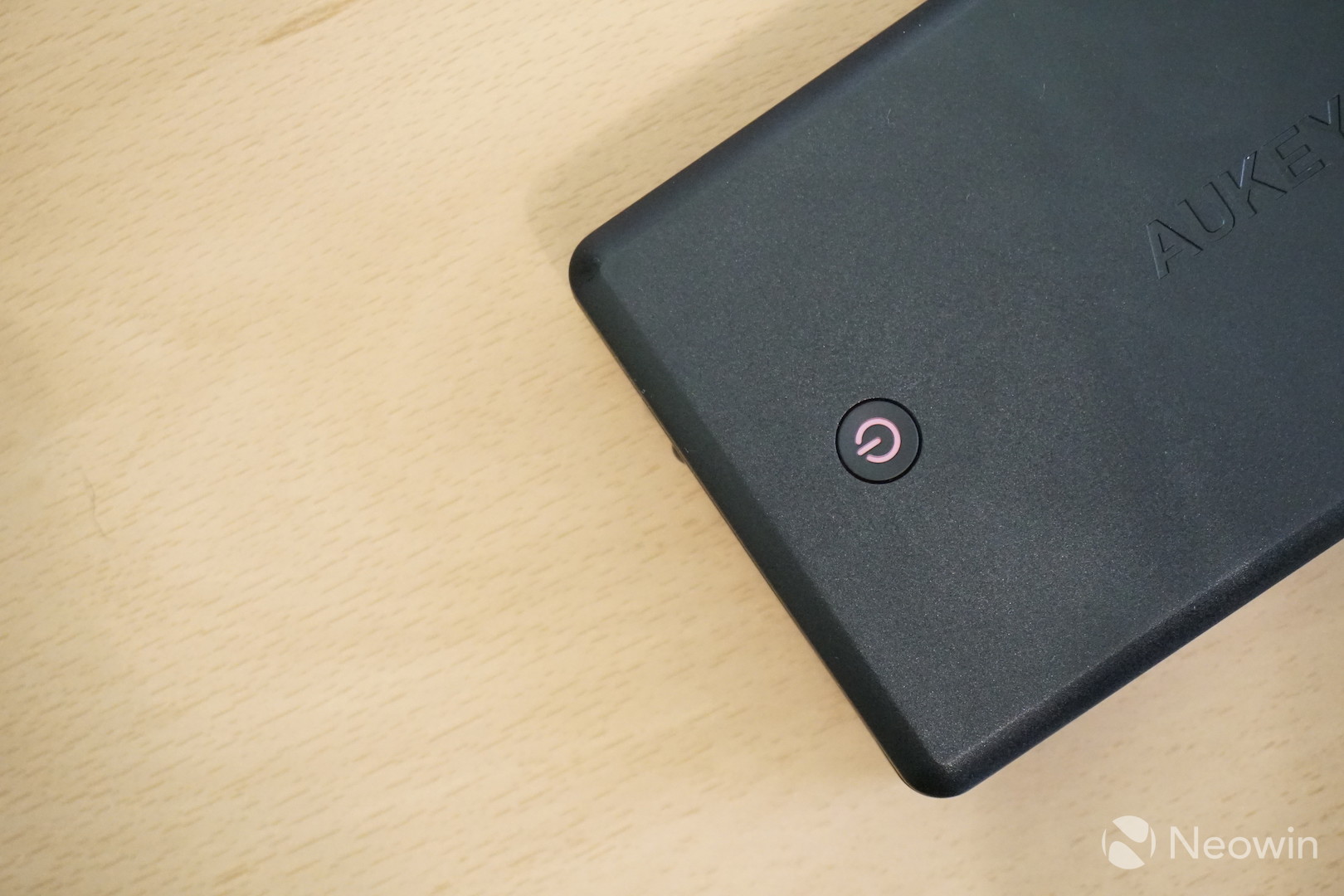 When you have any kind of battery pack it's important to know just how much juice you have left so you can be prepared and charge it if necessary. This is where the PB-Y3 and other similar power packs fall short in that they generally do not have a percentage display. The battery indicator on this unit is a bit basic and only offers three different levels to indicate status. On a battery pack with a smaller capacity this might be acceptable but when you are dealing with roughly a 30% window that equates to 10,000mAh, it is simply just too much to try and gauge how much charge you might have remaining. As mentioned previous, this unit does not come with a display and as such indicates battery remaining in three stages: white is 100-70%, green is 70-30% and red is 30% to 0%. If you aren’t keeping a proper tally of how many devices you’ve charged, things can be a bit frustrating. 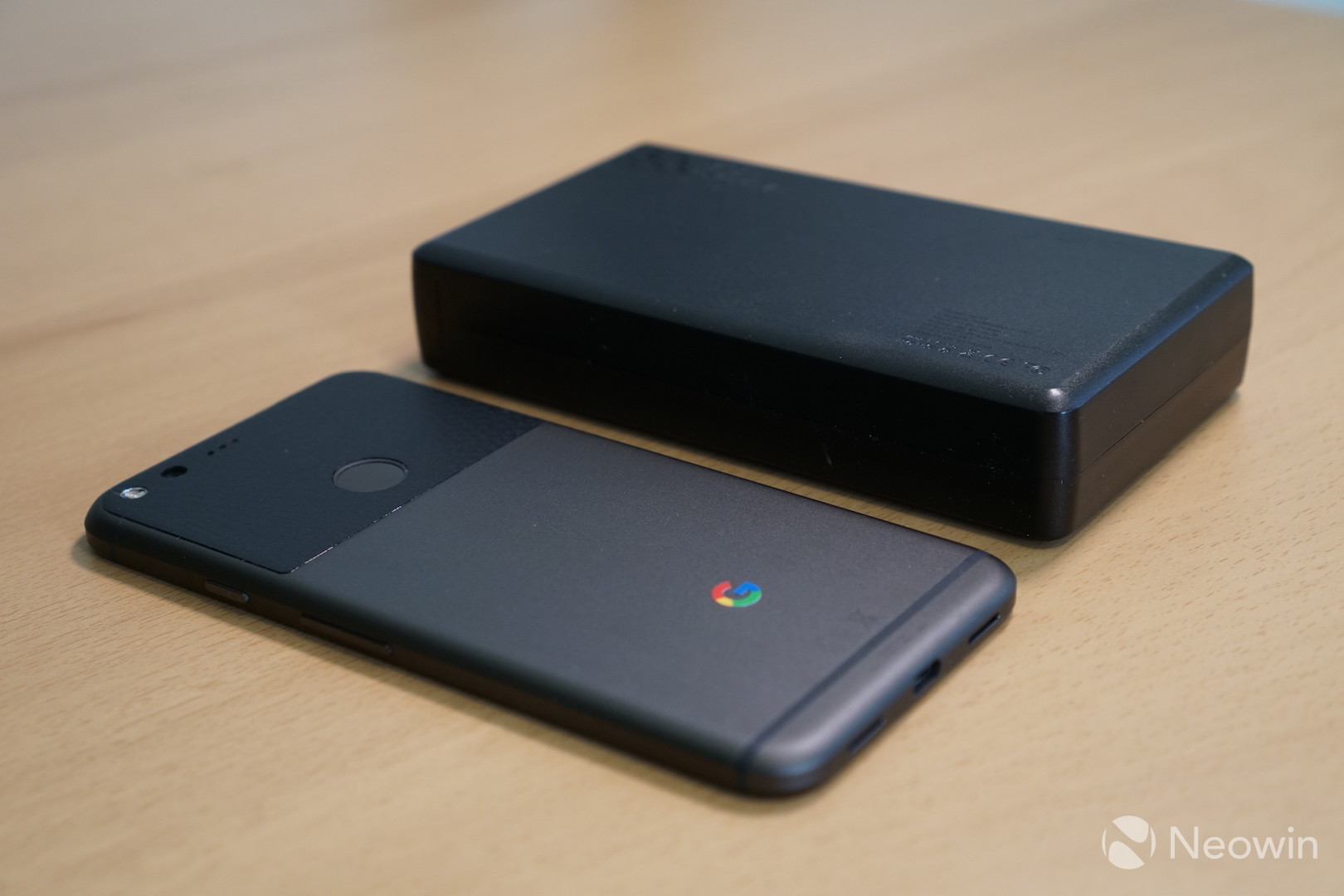 In my testing I was able to charge up the Google Pixel XL (3,450mAh) three times and the LG V20 (3,200mAh) three times before the battery was depleted. In total, this is around 20,000mAh. Although Aukey claims to offer 30,000mAh with this battery, there is energy that is lost and no battery that I have tested so far offers the full capacity listed. You would effectively be able to charge your device once a day for almost an entire week with this unit. 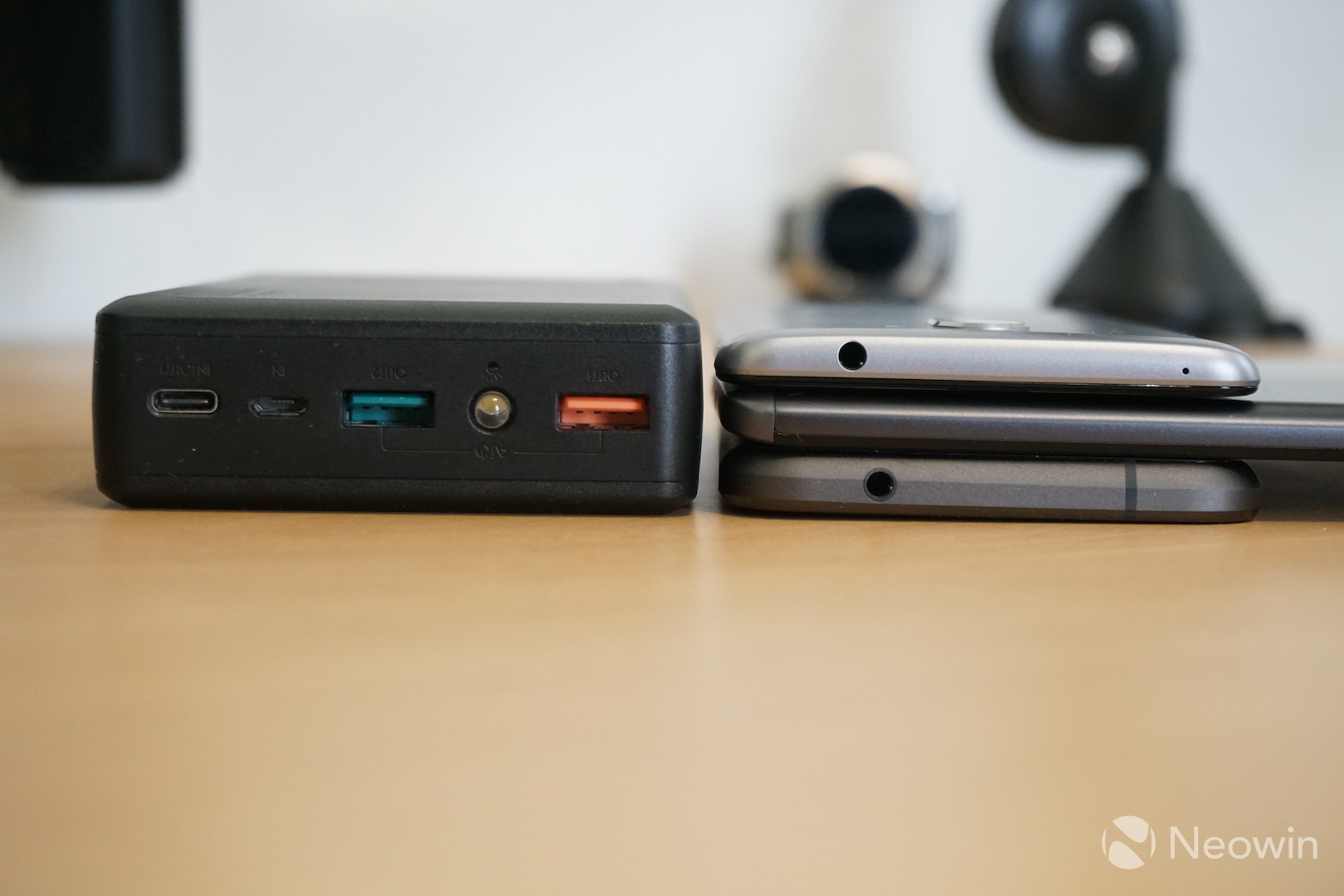 The ultimate pain point for the PB-Y3 might seem like an obvious one but comes when you have to recharge the power pack. Unlike a smartphone that offers a substantially smaller battery or might even have fast charging capabilities - the Aukey has a HUGE battery and does not offer any sort of fast charging ability when charging itself. That means that once it's depleted, you’ll be leaving the unit on the charger overnight. In my testing, it roughly took about nine hours to gain a complete charge. 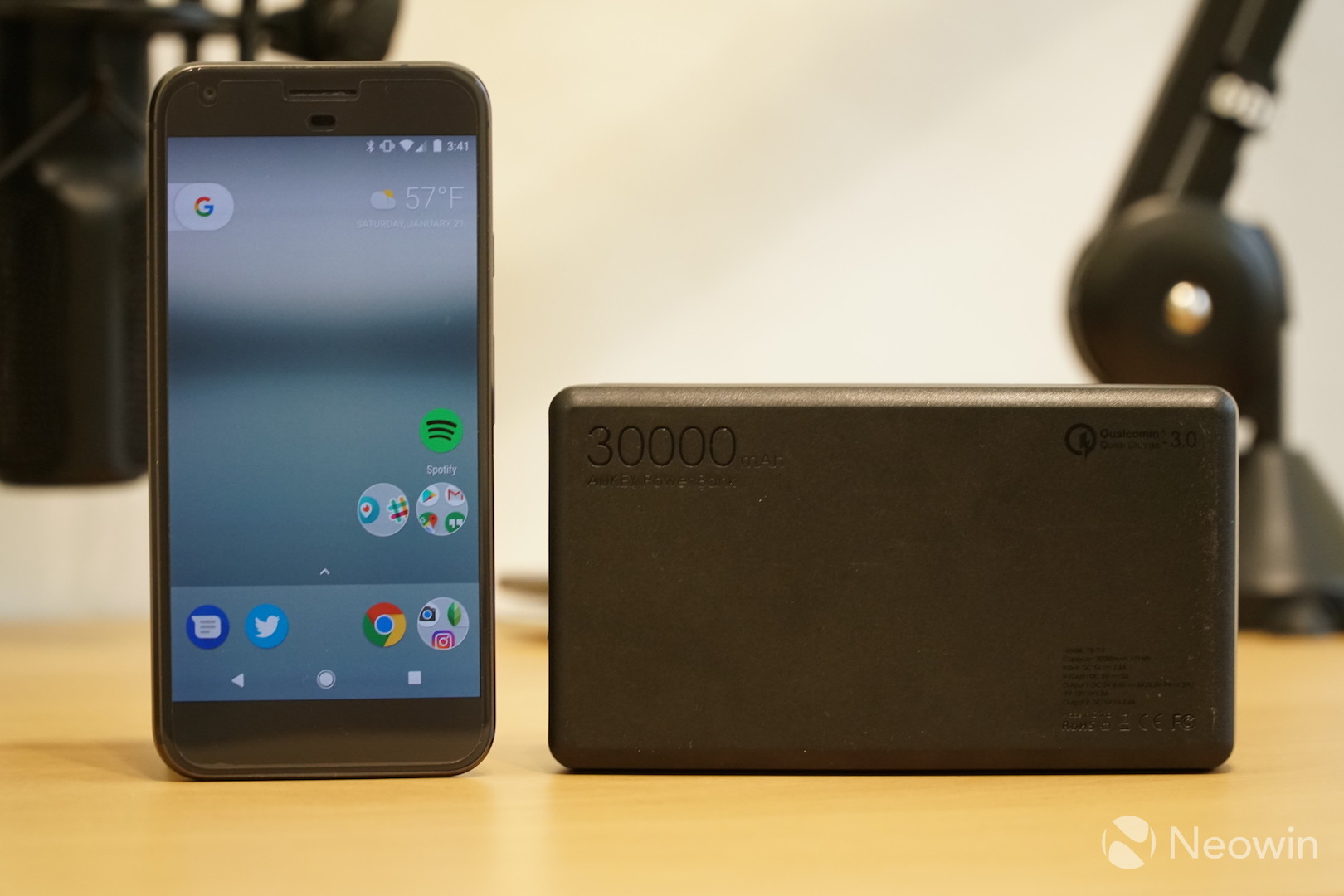 Overall, this is a very nice piece to have when you will be going out of town, in a location without power for an extended amount of time or need to supply power to multiple devices at once. Its versatility and its capacity are its shining points providing more than enough juice to charge up a handset or other devices several times. While Aukey has improved on the build quality in some areas (like rounding out the sharp corners that were found on previous models), it has also taken a step back with the overall construction (just doesn’t seem as sturdy). With that being said, this is very worthwhile purchase coming in at under $55 USD for anyone that requires more power than the average power bank.

I'd like to extend a big 'Thank You' to the folks at Aukey who supplied the PB-Y3 for this review. If you are interested in purchasing this device, you can pick it up from Aukey via Amazon. You can check out more at Aukey's official product page.