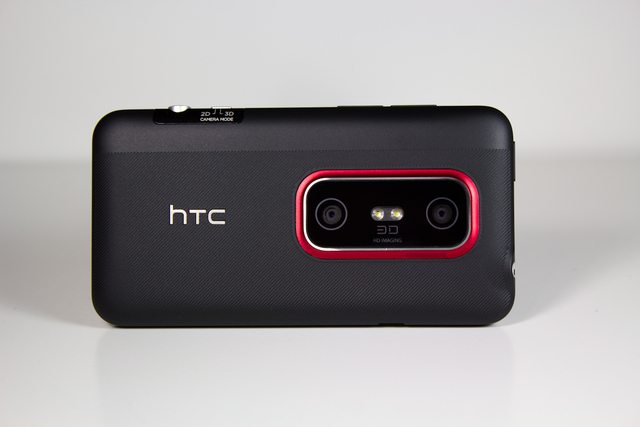 Is that phone 3D or is it just happy to see me?

The mobile market these days has gadget lovers planning their next purchase based on roughly four key items: size, hardware specs, OS, and the key features or special touch that separate their phone from the competition. The HTC EVO 3D pushes forward in most of these categories (with Android being a personal preference) with its dual core 1.2GHz CPU, Adreno 220 GPU, 1GB RAM, 4.3" QHD 3D screen and 3D video recording and picture taking capabilities. The phone comes packaged with an 8GB class 4 microSD card as well as a USB wall charger and micro-USB cable. The EVO 3D is by no means a small phone, but for those used to the EVO 4G or similar phones it will feel at home in your hand.

General Use
Booting up the EVO 3D for the first time is straightforward. It asks to activate the phone, asks which wireless network to connect to, and then walks you through a quick tutorial and links in your Google, Flickr and other accounts. Immediately you can tell you are in for a great experience. Flipping through the home screens is smooth and animations in general are nice and not overly done.

HTC's Sense 3.0 will feel comfortable for those who have used other versions of it in the past. It does add a few nice features such as customizable lock screens that allow you to set four apps you can launch directly by swiping them as well as give you information on your friends through Twitter and Facebook updates. One change I have not been fond of so far is the application list paging. On the EVO 4G you were able to swipe the list and it would scroll until you stopped it or it reached the end. In contrast, on the EVO 3D you have to swipe for every full screen page of applications installed.

The battery life was a major concern due to the updated hardware being much more powerful than its predecessor. So far I have found it to be comparable to my EVO 4G where it lasts a full day of use (approximately 14hrs) and still has decent amount of life left. The phone also feels nice in the hand and has a good grip with the textured case backing. Since today was the first full day of having the phone as well as having it in my office it was getting a lot of use showing off the 3D features, including shooting 3D photos and video, so it may actually be even doing better than the 4G but only time will tell for sure.

3D
Faster hardware aside the key feature that currently separates this phone from the market is of course its 3D features. Not only can this phone display 3D photos and videos using glasses-free technology, it can also record 720p 3D video and take 3D photos using its dual 5mp cameras located on the back of the device. To be honest, when I decided to upgrade to the EVO 3D I didn't care about the 3D and assumed it was mostly a sales gimmick; I just wanted the upgraded CPU, GPU, RAM and QHD display. For the first minute or two I hated the 3D effect; it looked poor (much like those old 3D cards that looked 3D when you moved side to side) and overall just didn't look that "3D". Since I had been setting up the phone, I had it closer to my face than normal. Just before I gave up on 3D features I moved it further away and then it became clear: that is a neat feature! I then loaded up The Green Hornet 3D that comes preloaded and found that watching a movie in 3D was far simpler and less strain on the eyes than still photos. The positioning of the phone also seemed far more forgiving while watching video. The general consensus at my office was the 3D feature was better than expected and pretty favorable.

After taking a few 3D photos I headed outside to try out 3D video recording. The video and photos recorded from the EVO 3D are not nearly as crisp and distinctly 3D as the preloaded examples but they still hold their ground. I did find it difficult to try and take a 3D photo or record 3D video since the phone displays the live view in 3D. If you are holding the camera anywhere but right in front of your face the 3D effect is not quite right so it is hard to tell if it is in focus or if it is just a bad angle to the screen. General camera usage is easy thanks to the dedicated camera button on the side of the phone. The camera button is a two step button - half press to focus and full press to take the photo. I found this to be much easier than having to tap a button on the screen, especially when the phone is not at a great viewing angle. Next to the camera button is a 2D/3D toggle switch to disable/enable 3D photo and video capture.

The EVO 3D also comes preloaded with a 3D Spider-Man game. Unfortunately the first time I attempted to play it the phone froze and I had to pull the battery out. Since then it has been fine and I was able to play the game for some time. I noticed with the game that after a short period the 3D effects weren't as noticeable and didn't seem to affect my eye strain. It will be interesting to see what developers come up with as 3D makes its way into more phones and more hands.

Usage
Call clarity and signal strength have been the same for me at both locations I primarily use my phone – work and home. The calls I have made seemed no better or worse than my EVO 4G had been. I tried connecting to 4G in Detroit where I work and the signal was also just as good as the EVO 4G. Note that Sprint's 4G network has not yet officially launched in my area.

I ran a few checks to compare a few underlying features of the EVO 3D vs the EVO 4G. When the EVO 4G came out it had a limit on the frames per second (fps) it could output which cause some areas of the phone to slightly tear when scrolling or in general feel slow. That was changed after HTC released an update that allowed it to increase the frame rate. The 4G after the frame rate unlock would see around 50fps using an app called fps2d. The EVO 3D scores on average 60fps which gives a nice upper limit for whatever content you throw at it. Another test that was run on the 4G was with a program called Dotty. What Dotty did was check how many multi touch inputs the phone was capable of detecting. Different EVO 4Gs had differing amounts depending on the revision ranging from 3 to 5 touch points. The same test run on the EVO 3D shows the launch units are capable of 4 touch points. Most people and apps will not need this many, but the capability is there.

Overall
With the HTC EVO 3D priced at $200 with a 2yr contract with Sprint only a year after the EVO 4G was released, it shows that mobile technology is not only moving fast but staying reasonably priced. If you want a lot of power in your hands that is capable of tackling everything from solitaire and emails to 3D movies and games, the HTC EVO 3D is definitely a good choice. If you need a phone that can last days away from a charger, however, this phone, like many other of the powerhouse phones, won't cut it without adding an extended battery.

Cons:
Battery life lasts only about a day with normal usage
Large phone (if you are looking for a powerful smartphone, this shouldn't be an issue, but for some it is too big)
HDMI out requires a MHL adapter which is not yet readily available

2011-06-25 Updates:
As requested I took some sample 3D videos and posted them both here and here. These were taken at the Detroit River Days festival. While taking these videos I did notice one issue with my phone and 3D recording - the right camera seemed to shift around part way through the first video. If you look at the side-by-side version on YouTube and start paying attention around 22 seconds in you will see the right camera shift its view to the left some. When viewing on the phone it is noticeable that the 3D does not quite  look right when it happens. I have not seen other reports of this yet, but the phone has only been officially released for almost two days so we will have to see if it is a common issue.

To clarify the battery life, after a full day (7:30 AM unplug through around 8:30 PM) I still had around 40% battery life remaining. This time included taking several videos and photos at the festival as well as showing the phone off to more people at my office, so it had a fairly decent workout. While the phone would not last over a weekend getaway without charging, in most cases it has ample power to get you through an average day.


A comparison between the EVO 4G and EVO 3D when loading two PopCap games
The difference is around six seconds for Plants vs. Zombies and Peggle which means the EVO 4G takes 50% longer than the EVO 3D to load the game. I also noticed in Plants vs. Zombies the transitions between levels and when you get upgrades at the end of the level are much smoother than the EVO 4G which became really choppy. Overall it gives a much nicer experience when playing these games