It's no secret that Amazon is pushing hard to get into the grocery business. This week they announced a new Dash Wand, as well as the $13.7 billion dollar acquisition of grocery store chain Whole Foods. At first glance, the two may not seem related, but the timing of the product release and the Whole Foods announcement are too much of a coincidence to think otherwise.

So what is the Dash Wand? Merging Amazon Echo with a Dash Button, it's a small handheld device with a single push button input, a tiny speaker, and a scanner. As with products such as the well-received Echo, the Echo Dot, and the Echo Look, Amazon's latest gadget is also powered by Alexa, giving you all most of the functionality of the other devices with a much smaller price tag.

Configuring the Amazon Dash Wand is as simple as you would expect it to be, requiring nothing more than a few buttons clicks on your phone's Amazon app after you first browse to the URL provided on a card in the box. It's important to note that, currently, you need to have an iOS or Android device to complete the setup; it can't be done from your PC or a Windows phone, but I expect this will change in the near future as the same restriction was in place with the original Amazon Echo. 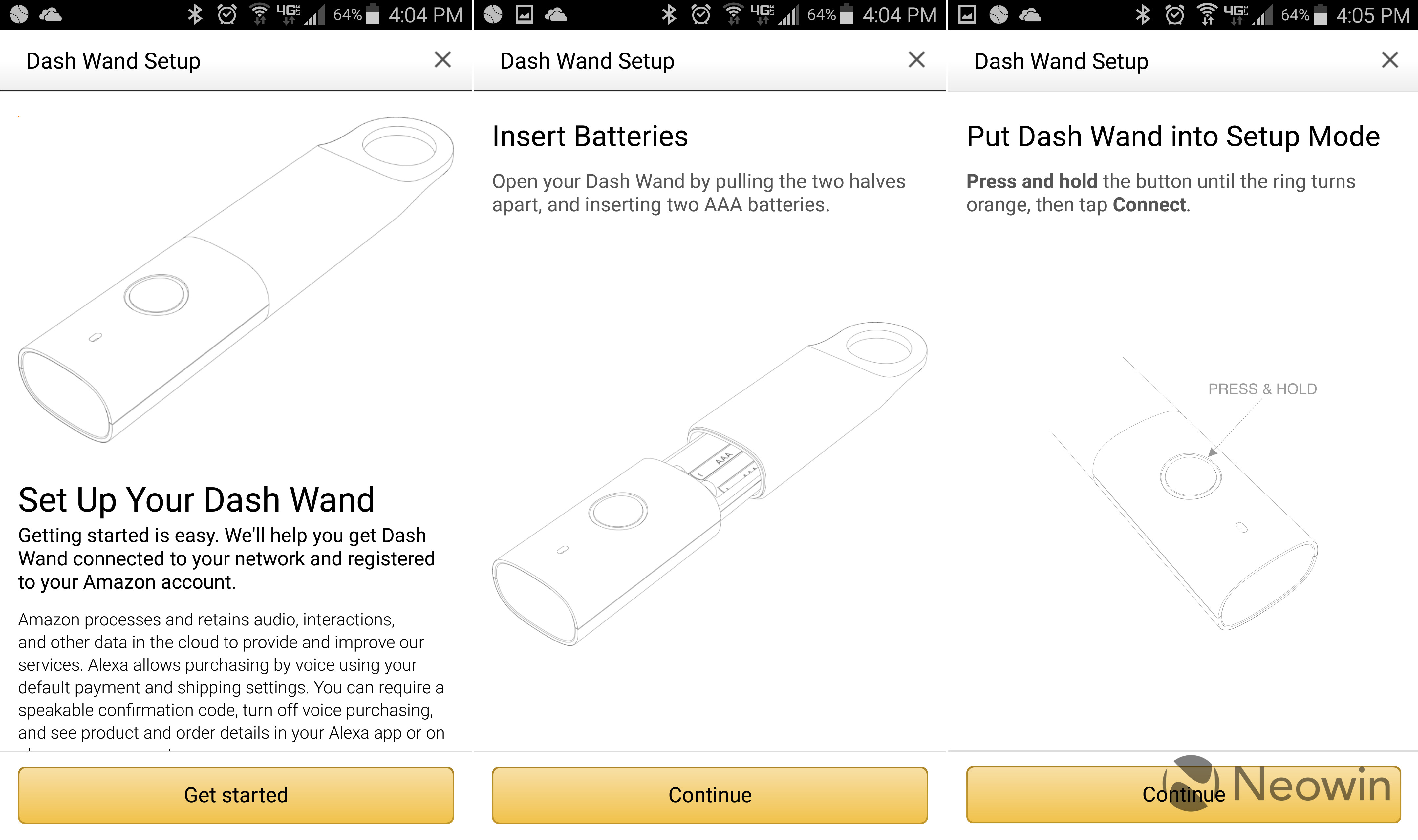 It's really that simple, although it should be said that when I tried putting the Dash Wand on a separate private VLAN - that has no access to any other devices on my internal network -, the configuration failed. I believe that's because my phone was not able to communicate with the Dash Wand, but with all of the security issues around the Internet of Things, it'd be nice if companies let us isolate their devices. 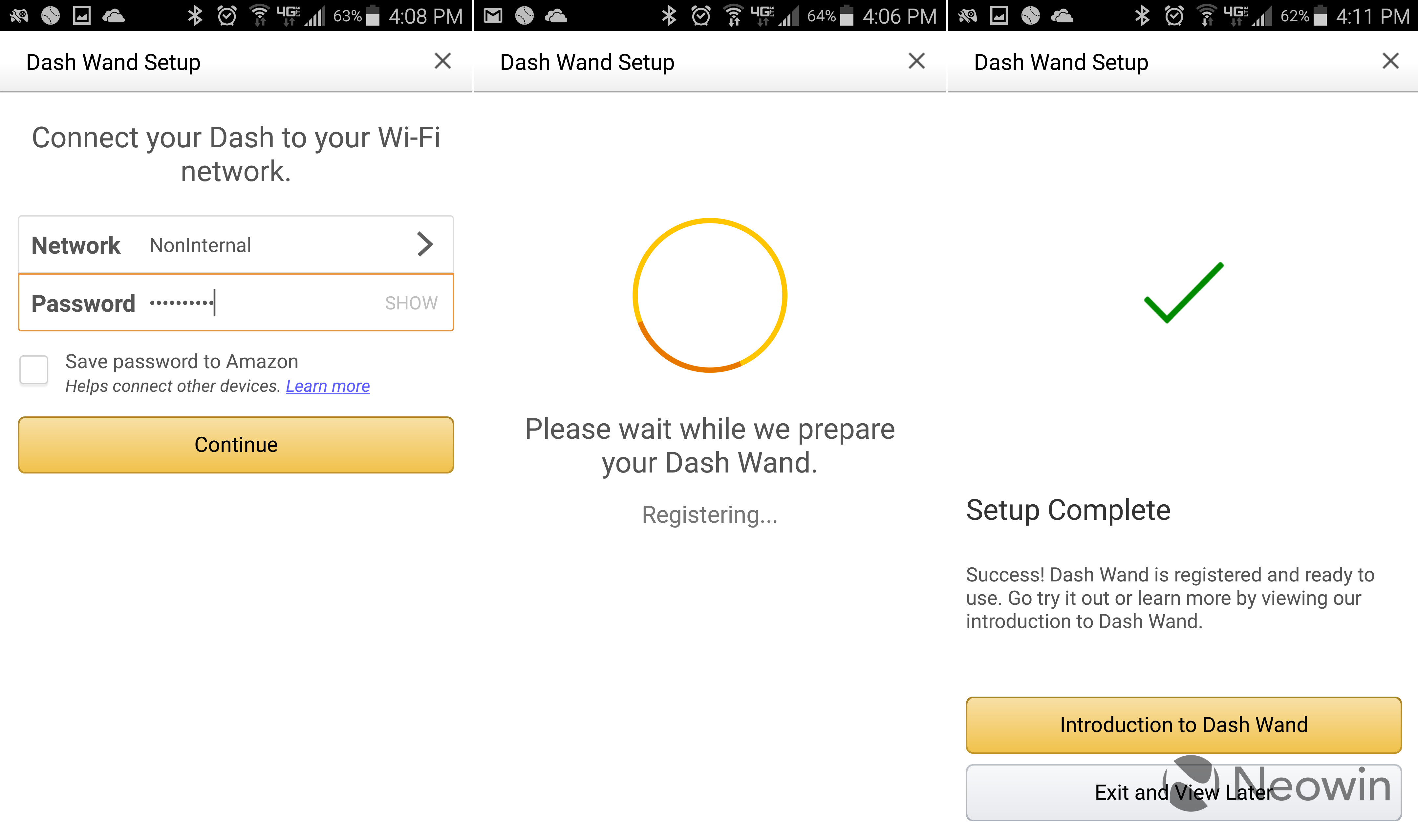 Another interesting piece of information that will make some people upset is that users are now given the option to save their wireless passwords directly to Amazon. While it's doubtful the company will use it maliciously, it's important to think about whether you really want other corporations knowing your private wireless key.

Since the Dash Wand has Alexa built in, you can use many of the same features of the various Echo devices. For example, you can press the button and ask for a joke, the answer to a math problem, or the population of the planet, and get the same response as you would from the full-fledged Amazon Echo. This means that if you have a home automation system, you can use the device as a pocket-sized controller.

The main restriction with the Dash Wand is that it does not allow you to play music, which is odd because if you ask the Dash Wand, "What can you do," the first part of the response is, "play music." I suspect Amazon hasn't tweaked their code to note the limitation with their latest device. Timers and alarms also do not work, but the Dash Wand responds with, "...are not currently supported on this device," leading me to believe that the functionality may be added in a future update.

Although Alexa functionality works, Amazon branded this the Dash Wand, so, as with the Dash buttons, they clearly want you to use it to purchase products. The product tries to streamline the purchasing process, but in my tests, it didn't work very well. While attempting something generic like, "buy toothpaste" worked fine (don't worry, the Wand tells you what you're going to order, how much it is, and asks permission before placing the order), when I tried placing an order for a specific product, it couldn't identify what product I wanted. 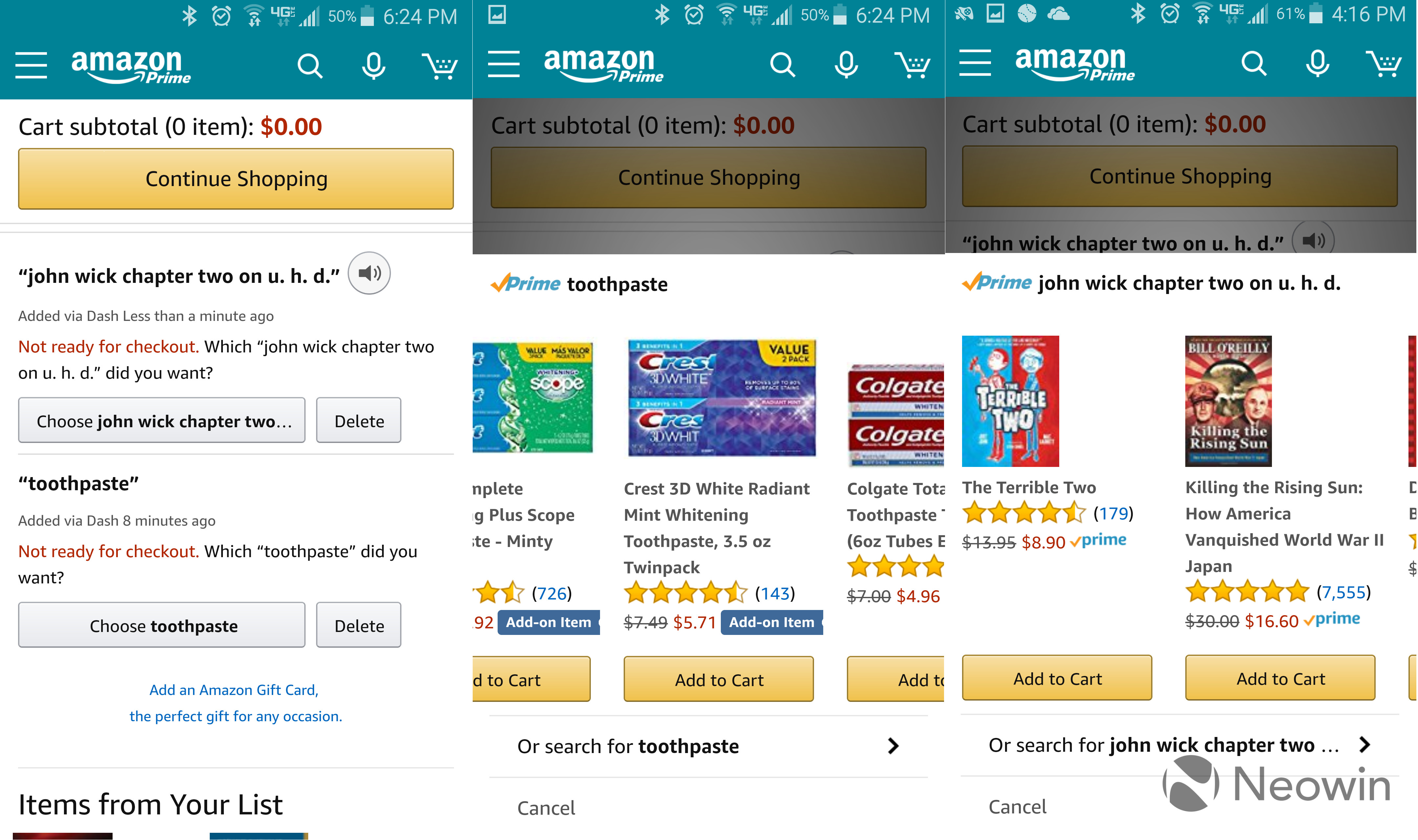 You can also tell the Dash Wand to simply put things in your cart, but this works only slightly better and seems to basically be a voice recording wishlist. In this case, I attempted to add both toothpaste and John Wick 2 on UHD to my cart, but both required me to load the Amazon app to fine tune the selection, and in the case of John Wick 2, the app had no idea what I actually wanted. When I didn't mention what format I wanted the movie on, things worked a little better.

In addition to being able to ask for what you want, the Dash Wand has a barcode scanner built into the tip. When you press the button to ask a question or order a product, the scanner turns on, allowing you to point it at a barcode to order a product. I was extremely impressed with how quickly the scanner is able to read and process the barcode. 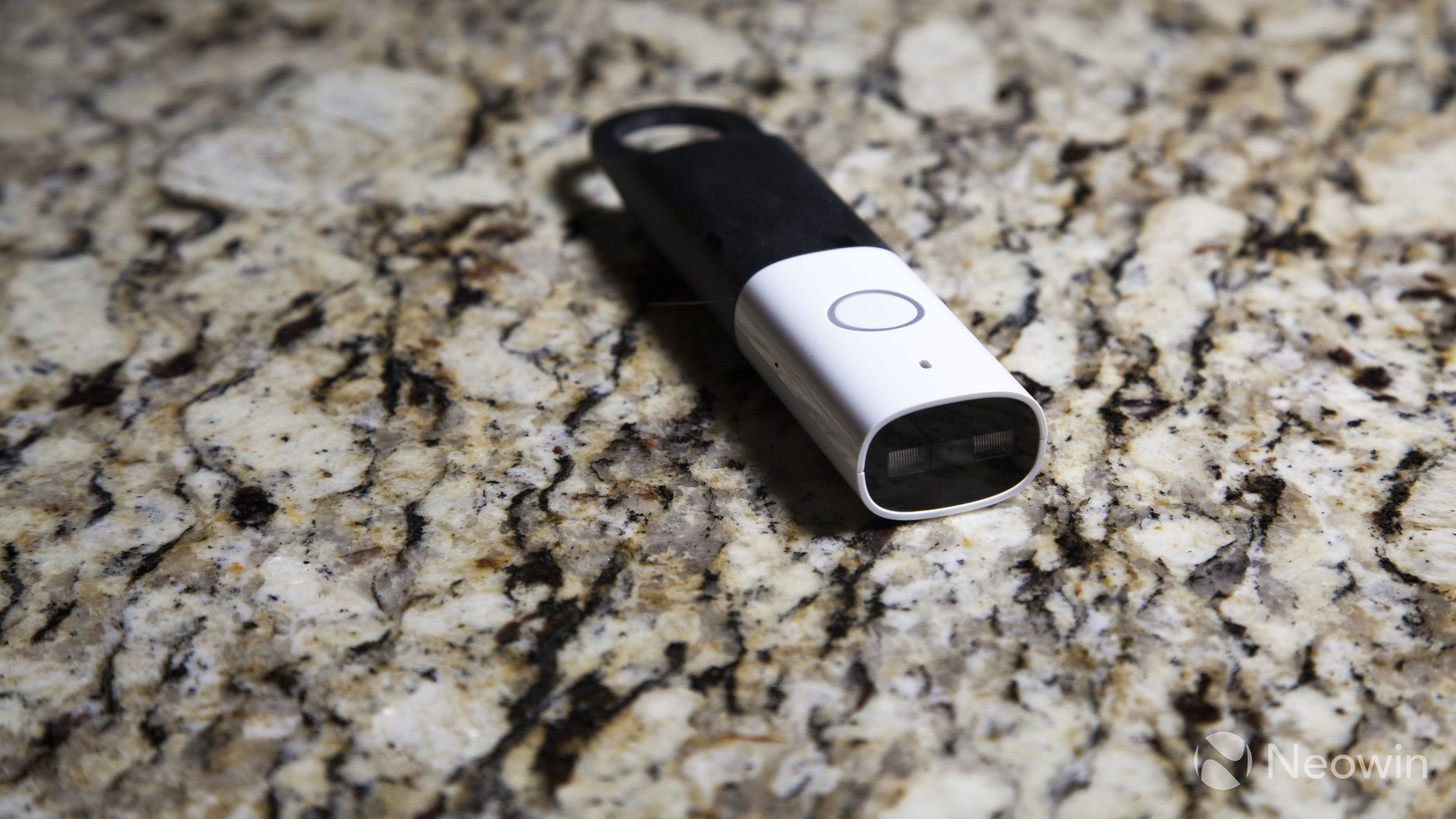 I went through my refrigerator and scanned some chip dip, a jar of pickles, and a jar of soy sauce, then looked at my cart on the Amazon app. While all of them were listed and were properly identified, because Amazon didn't carry any of the products, all I could do was push a button to select different items in their place. This seemed to defeat the purpose of using the Dash Wand. It's possible that users who have access to AmazonFresh in their city will have better luck since there will be a much larger selection of groceries available to them.

One nice touch that I wasn't expecting is that the Amazon Dash Wand is able to tell at what angle the device is being pointed, so that if you aim it up and towards your eyes, the scanner turns off. While you can easily get around this if you really want to shine it in your eyes, it's a nice safety feature to include.

If you want your own Amazon Dash Wand, Amazon is practically giving them away right now. At the time of this writing it is currently sold out, but when available, the device is only $20 for Prime members. To sweeten the deal, Amazon is providing customers with a $20 credit, meaning you only have to (potentially) pay sales tax, assuming you're already an Amazon shopper. Even if you don't use it for any of its shopping features, it could be handy to have in a garage or near a workbench for times when you want a question answered without having to unlock your phone.

In addition to the $20 credit, if AmazonFresh is available in your location, you receive the service for free for three months. It normally retails for $14.99 per month.

To make the Dash Wand as accessible as possible, Amazon has built a magnet into the base of the device so that users can attach it to their refrigerator. This would make it convenient to re-order food by scanning the barcode before throwing the packaging away. Since many stainless steel appliances are non-magnetic, Amazon also includes a hook with double sided tape so that you can hang the Dash Wand wherever you want.

If you carry the Dash Wand around with you, it's actually possible to use the scanner as a makeshift flashlight. Although it won't completely light up a room, the red light provided enough illumination to see by in a pinch. 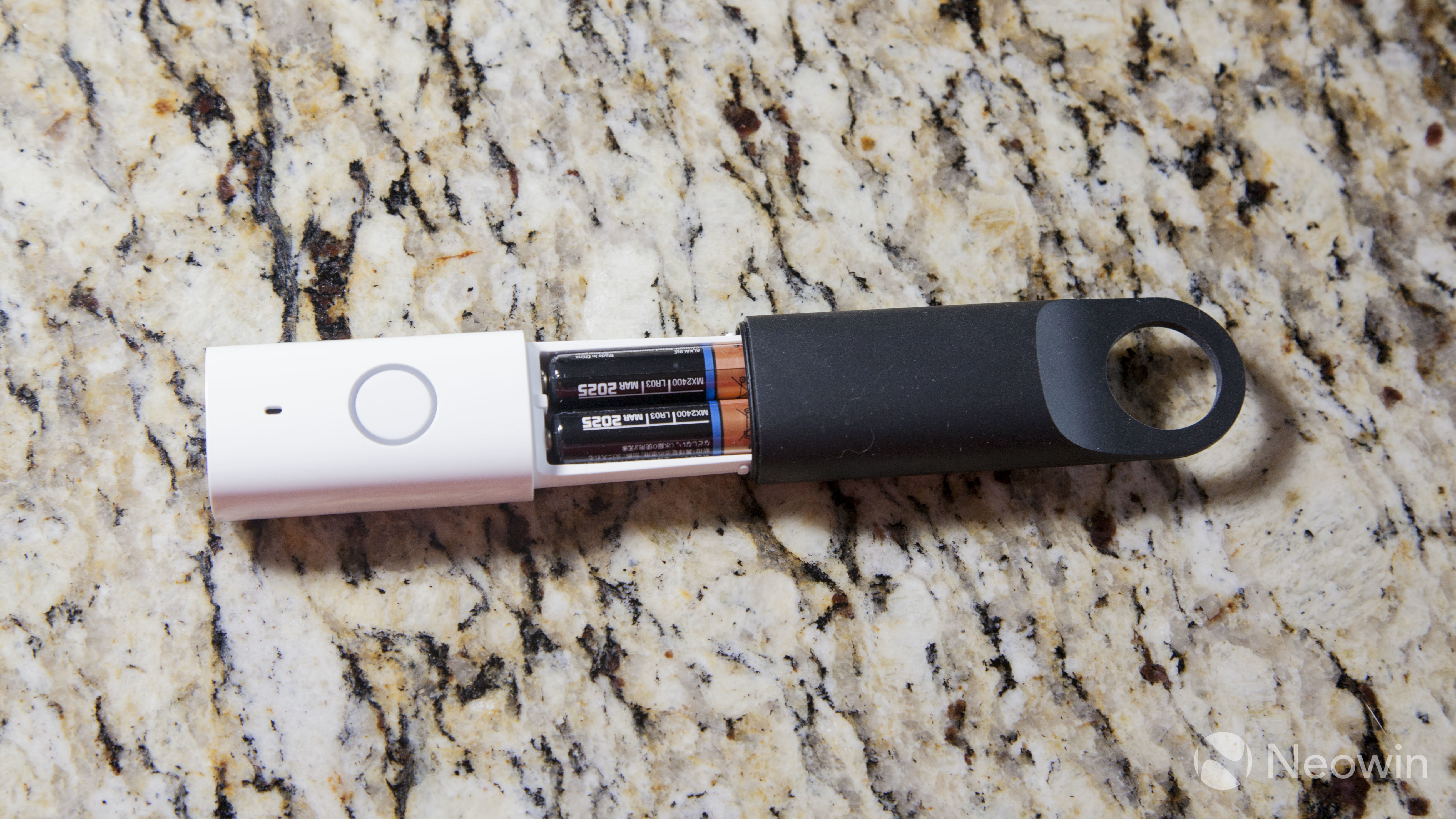 It's interesting to note that the Dash Wand emits a very high pitched buzz. I was able to hear it when the device was roughly eight inches from my ears. It's an issue that many electronic devices have, but is something to keep in mind.

It's clear that Amazon is hoping that the Dash Wand will replicate the success of the Dash Buttons and feed into its bottom line. In its current form, however, I don't see the Dash Wand being used as a purchasing device by many people, especially since Amazon doesn't sell many groceries.

However, the game may change once the acquisition of Whole Foods is complete. When Amazon has a grocery store in hundreds of cities, scanning an item and getting it delivered in an hour or two via PrimeNow seems to fit into the company's mission of providing products to customers as quickly as possible.

Until then, the Dash Wand is a cheap, portable Echo device that does almost everything except play music and set timers. Although the retail price is $35, it's currently on sale for only $20 with a $20 promotional credit for the purchase, making the product free. Even at full price, having a portable Echo is extremely handy and if Amazon makes it easier to buy things with the Dash Wand (which is clearly the purpose of the device), I can easily see it being a great way to restock your kitchen.