Gartner published its market share reports on Tuesday for worldwide mobile phone sales in 2009. According to the figures, BlackBerry, iPhone and Android devices have all increased their market share whilst Windows Mobile and Symbian devices have slipped significantly.

iPhone, BlackBerry, and Android increased their market share the most (up 6.2%, 3.3%, and 3.4% from 2008, respectively). Windows Mobile dropped 3.1% alongside Symbian who dropped 5.5%. Despite the drop for Symbian it still remained dominate with 46.9% market share compared to number two RIM which has 19.9% and third place iPhone with 14.4%. "Symbian had become uncompetitive in recent years, but its market share, particularly on Nokia devices, is still strong. If Symbian can use this momentum, it could return to positive growth," said Roberta Cozza, principal research analyst at Gartner.

Gartner's results appear to confirm Comscore's figures that were published earlier this month. Comscore found that both iPhone and Android market share in the US had grown and that Windows Mobile had lost market share in 2009. “Android's success experienced in the fourth quarter of 2009 should continue into 2010 as more manufacturers launch Android products, but some CSPs and manufacturers have expressed growing concern about Google's intentions in the mobile market,” Ms Cozza said. “If such concerns cause manufacturers to change their product strategies or CSPs to change which devices they stock, this might hinder Android's growth in 2010.” 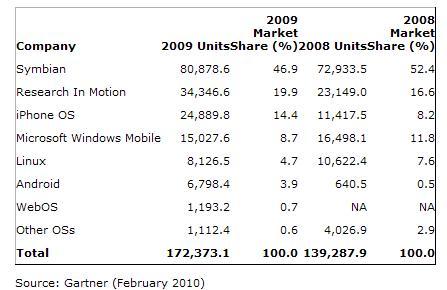 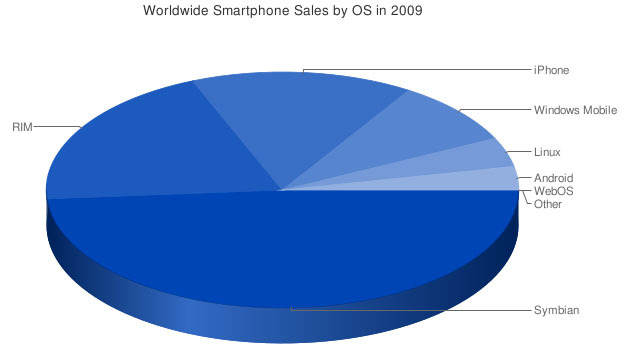