A battery with the product code EB-BG980ABY has passed through Safety Korea's website which has revealed all these details. 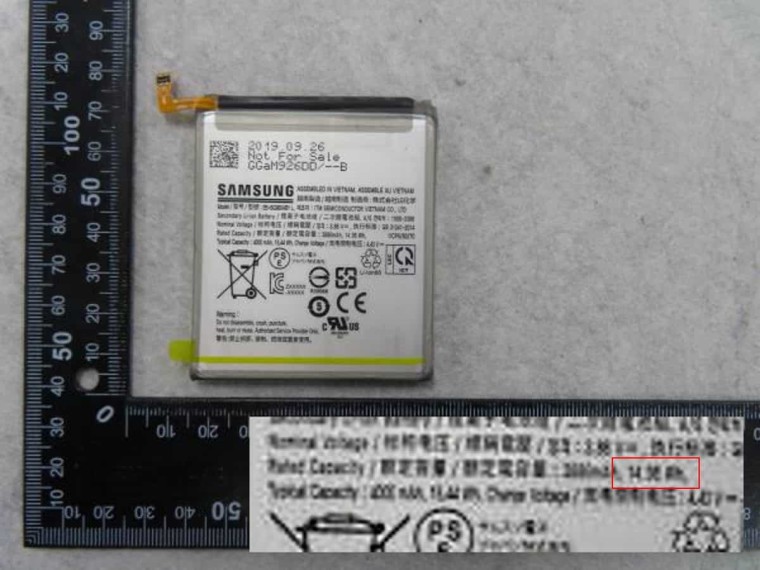 The product code 'G980' makes it clear that this battery will be used in Samsung's smallest flagship of 2020, the Galaxy S11e. The battery of the Galaxy S10e carries a product code of 'G970' and so it is obvious that its successor will carry the G980 product code.

The battery in the photo has a square shape instead of a rectangular design as found inside the Galaxy S10e which hints at Samsung redesigning the internals of the Galaxy S11 series.

While the text on the battery is not clear, one can at least make out that it has a rated capacity of 14.36Wh. Samsung tends to use batteries with a voltage of 3.85v which translates into this battery having a capacity of 3,730mAh. This means the typical capacity of this battery will be around 3,800-3,900mAh.

For comparison, the Galaxy S10e has a rated typical battery capacity of 3,100mAh.

Since the smallest Galaxy S11e itself will come with a bigger 3,800-3,900mAh battery, we should see a similar jump in battery capacity for the bigger Galaxy S11 and S11+ models.

It is possible that Samsung is bumping the battery capacity across the board to make up for the additional battery drain that will be introduced due to the addition of 5G across its entire Galaxy S11 lineup. Apple has also drastically improved the battery life of its iPhone lineup this year and so Samsung could be looking to play catch up in this department.

Rumors surrounding the Galaxy S11 also point to it coming with a new 108MP camera.

The Galaxy S11 series is expected to bring major improvements on the camera forefront and battery life.