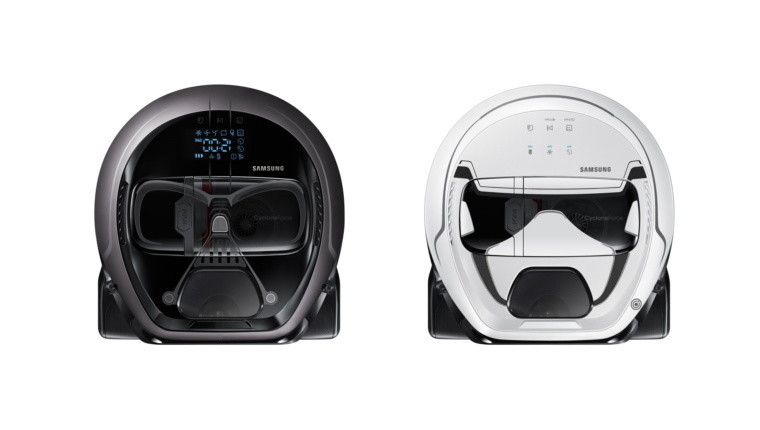 Samsung has announced the availability of Star Wars limited edition versions of its POWERbot robot vacuum cleaner. The new limited edition VR7000 comes in two styles, Darth Vader and Stormtrooper, which include sound effects that all Star Wars fans should recognise. Samsung has worked with Star Wars fans during product planning, design, production, marketing, and distribution in order to get the products right for fans.

“We are very pleased to be part of the excitement leading up to the release of the Last Jedi and to be launching our limited edition POWERbot in partnership with Star Wars fans. From its industry-leading suction power, slim design and smart features, to the wonderful character-themed voice feedback and sound effects, we are confident and Star Wars limited edition of the VR7000 will be a big hit.”

The VR7000 Star Wars limited edition includes the cleaning technology and features of the original VR7000, including suction power capacity of 10 watts, CycloneForce technology, and Edge Clean Master, which helps the vacuum clean those spots near walls and edges. The VR7000 can work autonomously, using Samsung’s Visionary Mapping Plus to remember the room and find the fastest cleaning routes around the home. With FullView Sensor 2.0, the unit can clean around home décor and personal items as small as 10mm.

Pre-orders begin on Tuesday 10th October from Samsung.com, but it’s only available in the United States. With the launch, Samsung will premiere its “Vacuum Your Space” promo which was created by the Star Wars fans which Samsung had input from. The Darth Vader model costs $799 and the Stormtrooper version will cost $699.