Web sites are getting visited more and more by bots rather than humans, at least according to a new study by Incapsula. The company, which offers cloud-based services to web sites, revealed that 61.5 percent of Internet traffic is being generated by bots, adding that that figure has actually increased from 51 percent back in March 2012. 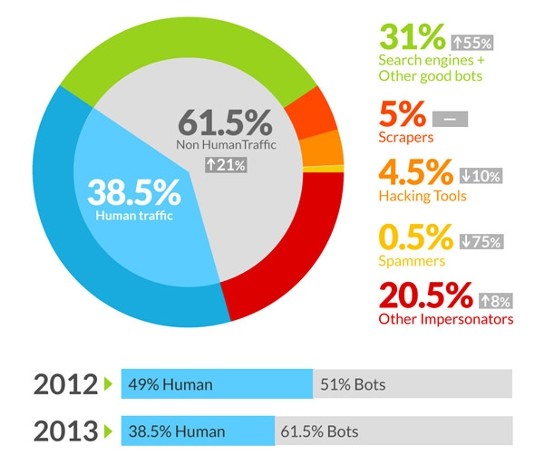 The study results came from monitoring 20,000 sites on Incapsula’s network over a period of 90 days. The numbers show that 31 percent of all web traffic comes from search sites like Google and Bing along with other "good" bots. However, the other 30.5 percent belongs in the 'malicious' bot category, including "scrappers" that seek to steal content and email addresses, hacker bots that try to take over websites or distribute malware, and other bots that launch denial of service attacks and try to reduce a site's available bandwidth.

One interesting change from last year's report is that spam bot activity has been reduced by 75 percent and now only takes up 0.5 percent of all web traffic. Incapsula believes that part of the reason for the reduction is due to Google's efforts to limit automated link spamming, thanks to changes in its search algorithms.