The successor to Razer's gaming phone has been getting some attention recently. Last week, it was spotted on Geekbench, and then rumors cropped up about the inclusion of Chroma lighting in the device. While Razer is still not providing any tangible information on the device, a new render has shown up, claiming to depict the upcoming handset. 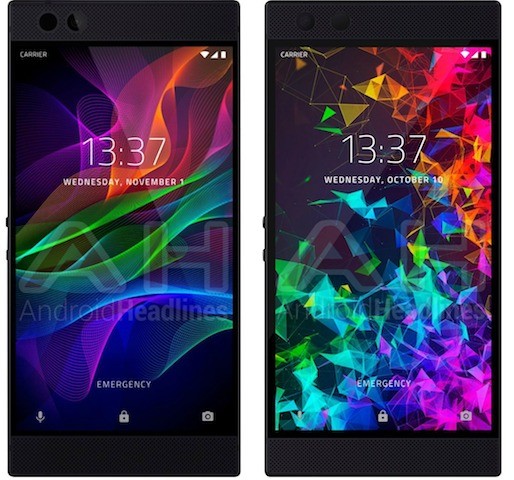 If the image is to be believed, the new Razer Phone 2 will be very likely to be mistaken for the original, at least when looking at it from the front. It shows the same large top and bottom bezels that contain the front-facing stereo speakers and very similar placement for the camera and sensors at the top of the screen. If you look closely, you may notice that the spacing around those sensors seems to be ever-so-slightly different, but it's a very minor change. On the side, you can also see the same shape and position for the volume buttons.

It may also be worthy of note that the date displayed on the screen is different from last year's model. The original Razer Phone shows a November 1 date, which is when it was announced last year. If the render is real and coming from Razer, it could be pointing to an announcement on October 10.

While we don't have much official information on the device, this seems to be a merely iterative upgrade to last year's Razer Phone, simply updating to the latest available processor and a newer version of Android. The rumored inclusion of Chroma lighting is somewhat unique, but it's not entirely new, seeing as Asus is doing something similar with its ROG phone.

As we stated last week, this may create the feeling that the Razer Phone 2 will have some trouble standing out in the market. The design choices of the original were certainly unexpected for a flagship in 2017, and it featured the first smartphone display with a 120Hz refresh rate, but that alone may not be enough to wow customers a second time. We will have to wait and see if Razer manages to surprise us when the time comes for an official announcement.