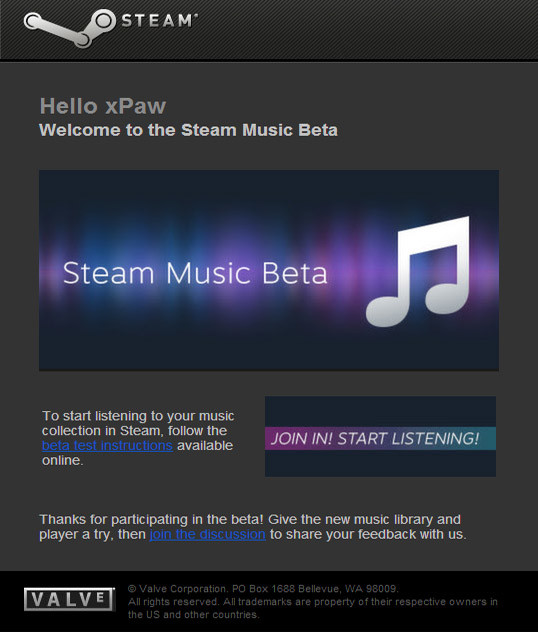 Valve has released an early version of its SteamOS to the general public and of course anyone can download the Steam client and run it in "Big Picture" mode. Now Valve is preparing to expand the features of Steam and SteamOS beyond just playing games. Today, the first invites were sent out to a select few testers to try out a closed beta of Steam Music.

In a FAQ post on the Steam Community page, Valve offers up more information on Steam Music, which is basically a new software app made to play local MP3 files from a user's PC hard drive. The player can run the software while they are playing games on Steam or SteamOS and people who are participating in the SteamOS in-home streaming beta can also use it to stream music files to a remote PC.

So why add such a player in the first place? Valve states:

For years, customers have been asking us to provide a basic way for them to access and play music while in-game. Task-switching between resource-intensive 3D games and other desktop apps has never been a graceful experience for gamers, so an in-game player can help by eliminating that pain point.

However, the company also believes that it can "broaden Steam as an entertainment platform which includes music alongside games and other forms of media." That kind of additional support will certainly be needed when the first third party Steam Machines go on sale later this year. Valve says in its FAQ that support for more audio file types are in the works for Steam Music, and hinted that it could launch a streaming music service, like Pandora or Spotify, in the future.