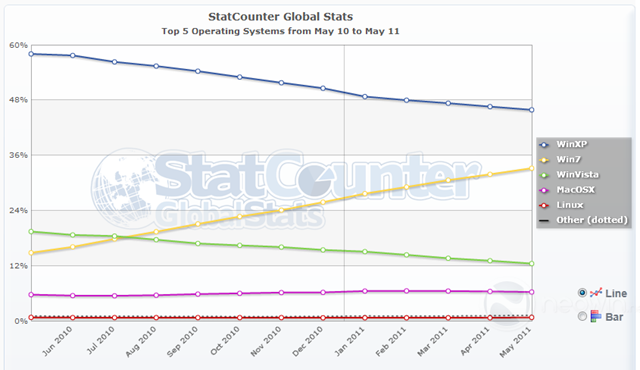 Windows 7 has been out for almost two years now, and it doesn't come as a surprise to many that it is now running on one in every three computers in the world, according to stats from StatCounter.com.

Windows 7 was released to manufacturing on July 22, 2009, where it was praised by tech journalists all around the globe. Now almost two years later, Windows 7 now has its first Service Pack, and is rapidly growing in market share.

Since the release of Windows 7, Microsoft has attempted to recreate its image after the Windows Vista disaster, and launch a number of successful products, including Office 2010, Windows Live Essentials, Windows Phone 7, Kinect for Xbox 360 and is now looking to continue its success through Windows 8, Office 15, and rumoured tablets.

Windows 7 currently sits at 33.2%, give or take one or two percent for accuracy, it has become the fastest selling, and fastest growing operating system in history. Based on estimates, Windows 7 could potentially overtake Windows XP this holiday season.