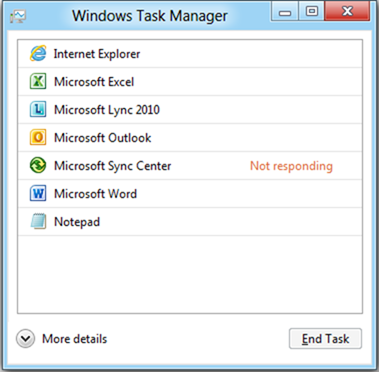 Written by Microsoft's Ryan Haveson, the blog entry first goes over what previous Task Manager users accessed the most. A whopping 85 percent all Task Manager users concentrated their activities on the applications and process tabs. By contrast, the services, programming, networking and users tabs are accessed just 15 percent of the time in Task Manager. In addition, the top user action in Task Manager is, not surprisingly, to shut down a process.

The default view of Windows 8's Task Manager, shown above, is usually how most mainstream users will see it, according to Haveson. He states, "For the default view, we designed a minimalist experience that appeals to the needs of the broadest customer base and most common scenario. When you launch Task Manager for the first time in Windows 8, you see a very clean view of your running apps. We made the default view great at one thing: killing misbehaving apps. And we removed everything that did not directly support that core scenario." 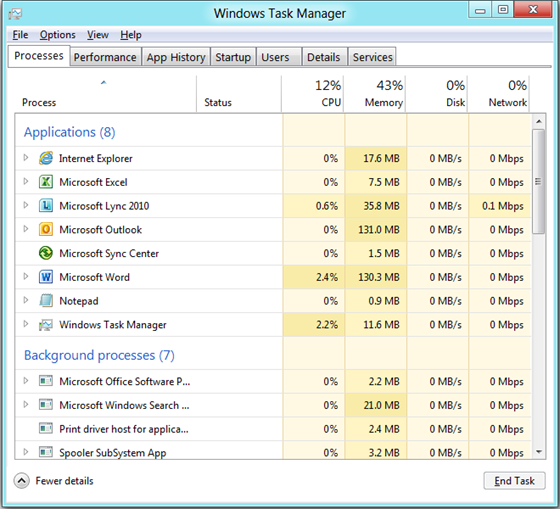 For the power user who wants more info about the programs and how they are running in Windows 8, hitting the "More Details" selection in the default view will bring up a host of options. As you can see above there are now "heat maps" that show by differences in color tone and by the numbers how much CPU power is being used by each program along with how much RAM, how much disk drive activity and how much network usage each program is accessing.

In addition to the features available for hardcore PC users, the new Windows 8 Task Manager tries to offer up more user friendly info about certain items. As Haveson writes, "Have you ever looked through the process list, seen something like "fussvc.exe" and wondered what it was? Adding friendly names was a good first step to resolving this problem (fusssvc.exe is actually the Fast User Switching Utility Service), but of course, to really find out what this process is, you need to search the web. The new Task Manager integrates a search context menu on right-click, so you can go directly to your default search engine (which you can customize) to see more details and relevant information. This can make a huge difference when deciding whether a background process is doing something useful or just wasting cycles."