While we have reported that the upcoming Windows 8.1 Update 1 will offer users better access to the OS with a keyboard and mouse configuration, there will apparently be some improvements for touchscreen-based PC owners as well. Winsupersite has found a revamped Disk Space feature in the recently leaked build of Update 1 that should make it easier for users to manage their Modern apps and storage space with a touch-oriented UI. 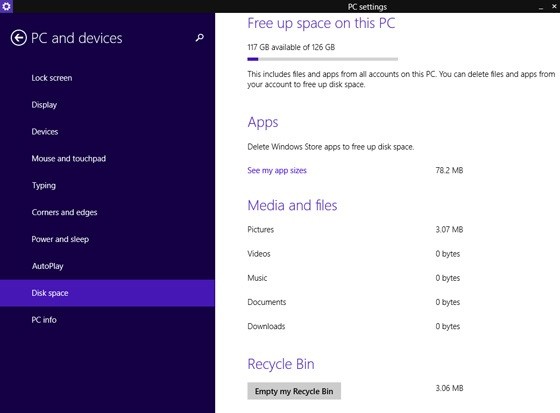 The Disk Space feature, which the report says will be available by accessing PC Settings, and then PC and Devices, shows how much storage space is available on the computer at the top. Below that indicator are three menu choices. The first shows the total amount of storage space that's being taken up by Modern UI apps, with a "See my app sizes" link. Pressing or clicking on that link takes the user to the App Sizes utility where each app can be uninstalled, if need be, to free up more storage space.

The second menu choice is Media and files, where users can see how much space is taken up by pictures, videos, audio files, documents and downloads. However, this part of the Disk Space feature does not allow users to interact with it in any way. It's possible that Microsoft will add that interactivity when the final version of Update 1 is released. Finally, there's a Recycle Bin menu selection that allows a quick way to empty any files that have been placed in that folder.

If Microsoft makes the Disk Space feature in Update 1 more interactive, it could allow users who don't want to switch to the desktop UI an easier way to manage their PC storage. Microsoft is rumored to release Update 1 in April.