MySpace has become a bit of a ghost town in the social networking world after most of its users left and joined Facebook. Now it appears that MySpace users who like to connect to their friends via Windows Live won't be able to do so very soon.

One of our Neowin readers, GreatMarkO, has written a post in our forum, stating that he has received an email from Microsoft about their future support of MySpace and Windows Live. In short, there won't be any such support for much longer: 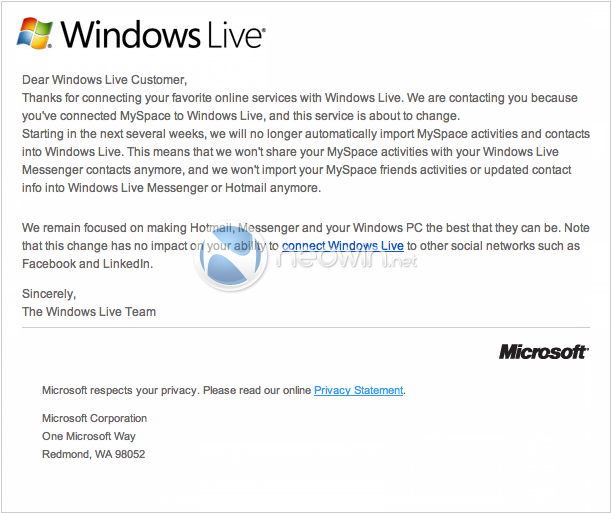 Neowin has contacted Microsoft to confirm this story.

We should point out that the email does say "no longer automatically import", which could imply that the support may still exist but the statement is ambiguous.

MySpace has struggled in the last few years to find an identity ever since it lost a majority of its audience to Facebook. In the summer of 2011, News Corporation sold off MySpace to Specific Media for just $35 million. Its new owners, which include Justin Timberlake, are now trying to turn the service in to a social music hub in a fight to keep the service relevant in today's market.

Thanks for the tip GreatMarkO