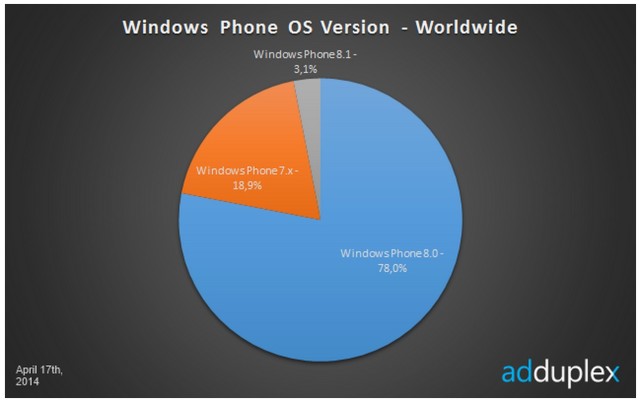 About a week after release of Windows Phone 8.1, the operating system is now on a bit more than 3% of the devices that Aduplex surveyed; the data comes from 3,886 apps running AdDuplex SDK v.2 and it was compiled on April 17.

Seeing that Windows Phone 8.1 is on 3.1% of the devices, it’s likely safe to assume that most, if not all, of the 3.1% are developers who are building applications for the platform or enthusiasts who signed up to receive the bits early. The obvious statement here is that the more developers with the new bits, the sooner existing apps can be updated to include the new features like the updated backgrounds for live tiles.

Another takeaway from the report is that when Microsoft closes the Nokia deal on Friday, it will take ownership of the brand that holds 93.5% of the Windows Phone market. Knowing this, it becomes quite clear why Microsoft had to buy the Lumia arm of Nokia, as it controlled too much of Microsoft’s user base. 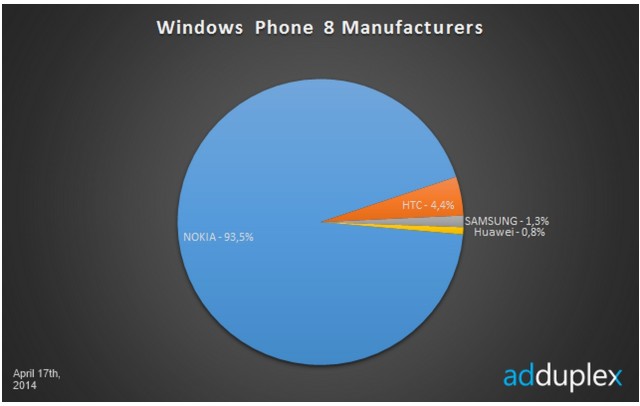 Finally, there are some unnamed Nokia devices that are in testing that show up in these reports. Adduplex says that there are quite a few RM-10xx models showing up, including the 1010, 1020, and 1027.

If you were looking for new devices by the OEMs announced at BUILD, unfortunately, nothing was spotted in this month's report.