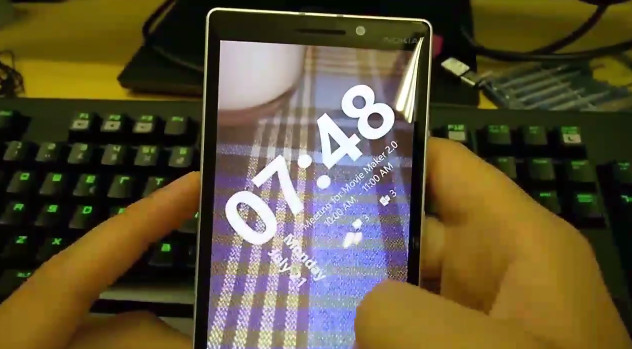 A couple of days ago, Joe Belfiore took to Twitter to let eager Windows Phone users know that the long-awaited lock screen app for Windows Phone 8.1 would be making its debut in the next couple of weeks.

Today, we are getting a first look at how these new lock screen apps will animate and how they will function. YouTuber and app developer David Lorenzin gives us a quick sneak peek of the upcoming apps showing off three very different screens.

The first is the classic lock screen that looks anything but. The new lock screen has a clean look with the time on the top in large numerals, the date, and notifications. The text is slanted diagonally and pulls away from the center when swiping to unlock. The text also has a nice organic bounce when you partially unlock the device.

The second is Clock Plus, which is a little more ambitious in its look. The top half half of the device is utilized to create a rotating clock that incorporates the background image of the lock screen. Underneath the clock, there are notifications and calendar events. When unlocking the device, the circles of the clock begin to rotate in clockwise and counter clockwise rotations.

Lastly, we get a look at Stripe. This lock screen has a number of horizontal "sections" that pull away from the center as you unlock the device. Each horizontal stripe has a section for the hour, minute, and seconds. The notifications and calendar events are located at the bottom.

With a couple of weeks to go, anticipation for the new lock screen apps is increasing. Initially, the lock screen apps will only be available to those that have a device with 1GB of RAM or more. Those with less will have to wait a little while longer.

Update: As @buckstermcgee points out, this vid just shows a fake 'preview' app; it does not show the genuine/official lock screen app in action. Thanks to Neowin member FiB3R for letting us know!