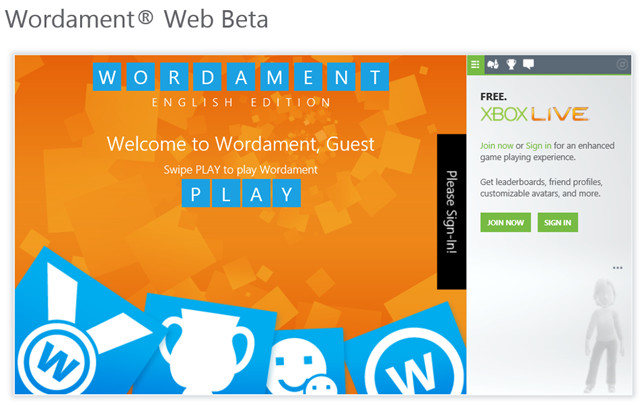 In December, the Microsoft-developed puzzle game Wordament launched on iOS following previous releases on Windows Phone and Windows 8, and in so doing became the first iOS game that supported Xbox Live Achievements. Today, a new version of Wordament was launched that has broken new ground on another platform.

The game's official website reveals that its developers have launched a beta test of a web-based version of Wordament that supports Internet Explorer 8, 9 and 10 as well as Google's Chrome and Mozilla's Firefox web browsers. It also supports Xbox Live Achievements, making it the first browser-based game to do so.

We support the same 12 puzzle languages in the Web version, just the same as on Windows 8 PCs and phones. And, like other versions of Wordament, the Web beta lets you sign-in to your Xbox account and earn ten achievements worth 50 Gamerscore. Even though this is a beta, this is a screen-for-screen match to our existing versions. You can view your stats, manage frenemies, check the leaderboards and of course play!

The web beta is being called an "experiment" by the Wordament team. More importantly, it opens up the chance that other web-based games could also support Xbox Live Achievements.