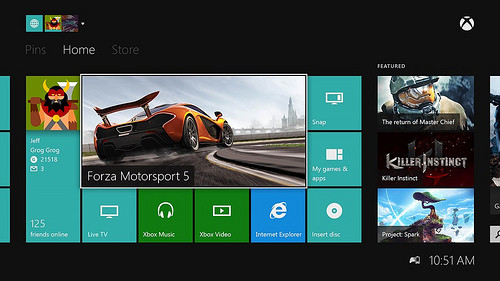 It was supposed to be out earlier this week but today the latest firmware update for Microsoft's Xbox One console is now being rolled out to its owners and should be installed on every unit by the end of the weekend. This is the second such update for the console since it launched in November (or the third if you count the "Day One" update).

As we have reported before, this patch for the console adds three major features; one is the long awaited storage management control that will finally allow Xbox One owners to see how much free space they have left on their 500GB hard drive. It also includes improvements for installing games and apps, with each now having a separate download queue (My Games and My Apps) and a way to control which content is downloaded first.

There's also a new battery power indicator for the Xbox One controller with this update, which you can see in the lower right-hand corner of the screenshot above. Finally, for those of you who want to, for example, type in addresses for the console's version of Internet Explorer, the update adds support for using USB keyboards.

Microsoft has another update planned for early March that will improve a number of the console's multiplayer and party features, among other things.