Xiaomi is one of the few companies that has decided to go forth with its presence at this year's Mobile World Congress, and at the event, the company is planning to unveil its next flagship, the Xiaomi Mi 10, which will be powered by the Snapdragon 865 chipset. Today, the company shared a teaser on Weibo (via Android Authority) for the Chinese launch, which is taking place this week on February 13, and it includes a render of the device. 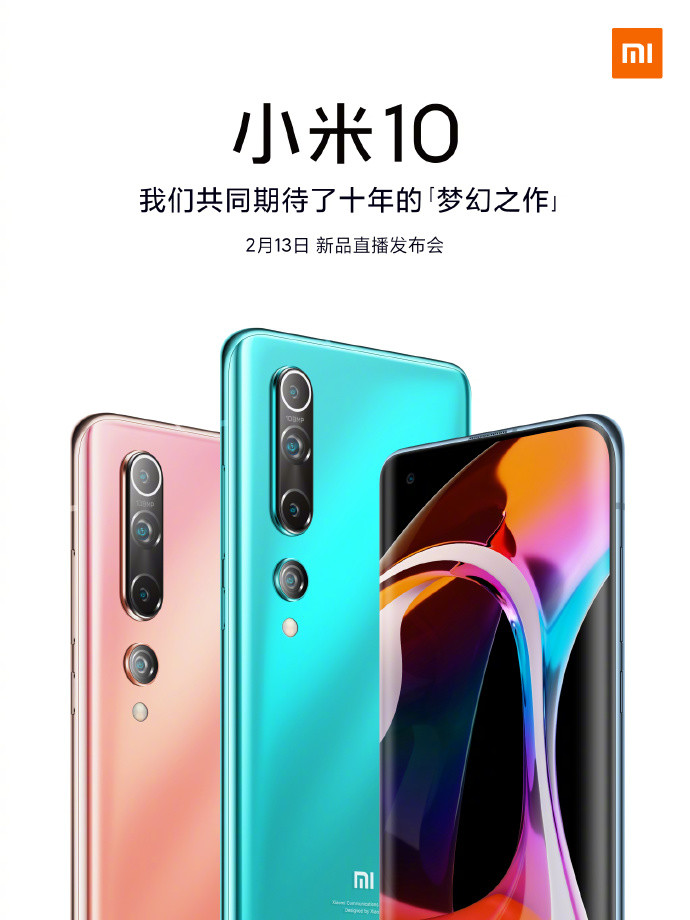 The render images show off notable parts of the design, starting with the color options, one of which is a green-ish blue and the other being a mix of pink and light orange. Another notable element of the back is the camera setup, which is comprised of four shooters, three of which are in the same module, and a fourth sensor is separated from the rest.

While specs for all cameras are yet unknown, the image shows a "108MP" text below the camera lens at the top, and that should be for the main sensor. Xiaomi was the first to use a 108MP sensor in a smartphone with the Mi Note 10 last year, but that was running on a Snapdragon 730G chipset, which had some trouble taking pictures at the size.

Over on the front, it looks like the display is mostly free of bezels, which is about what you'd expect from a flagship. While at first glance it might not seem like there's a camera there, Xiaomi has cleverly hidden it in the black-colored area of the display in the render. It should still be a regular punch-hole camera though.

As mentioned above, the Chinese launch of the phone will take place on February 13, at which point we should learn everything about its specs. A global launch will take place at MWC, and we should be able to get some hands-on time with it at the event.