Microsoft recently released the latest version of its mobile OS, Windows Phone 8.1 Update, to early adopters on its Preview for Developers program, and details of what the update will include have been extensively documented. One feature that hasn't been widely noted yet, but which appears to be a new addition with 8.1 Update, can be found in Office.

In Windows Phone 8 and 8.1, if someone sends you a password-protected Microsoft Office document, and you attempt to open it on your handset, you'll get an error message telling you that such files "can't be opened" on your device. 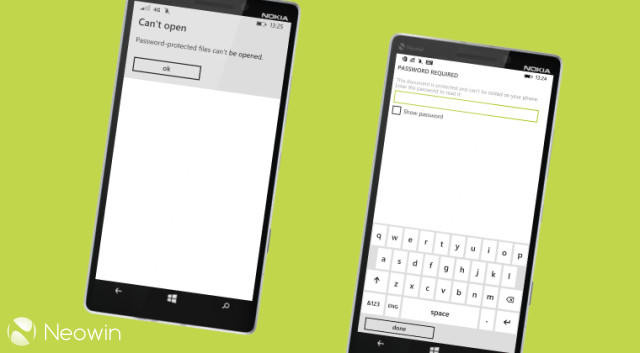 However, as Softpedia notes, if you open such a file in Windows Phone 8.1 Update, you'll now be presented with the facility to enter your password and gain access to open the file.

We confirmed this for ourselves, by attempting to open password-protected Word and Excel files on Windows Phone handsets - on a Lumia 930 running Windows Phone 8.1 (build 12397), none of the files would open; on a Lumia 1520 running 8.1 Update (build 14147), the password screen appeared and we were able to open the files.

Take note, however, that we were only able to open the files, not to edit them. For now, password authentication seems to afford you read-only access and nothing more on Windows Phone 8.1 Update, so if you want to edit a protected file, you'll still have to find another device that's up to the task.