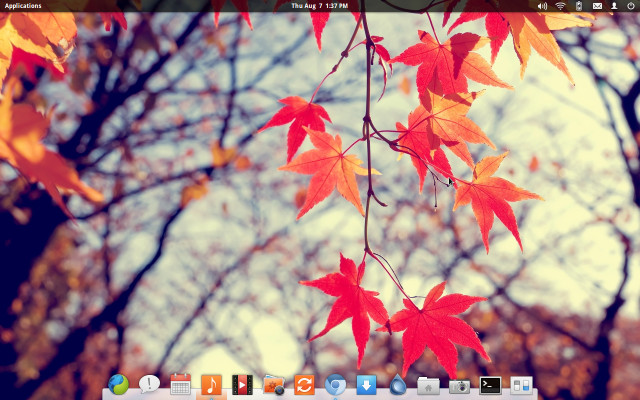 The Elementary OS desktop of the user johnnyftw, posted in our monthly desktop thread.

Elementary OS has incorporated a significant amount of the OSX design language, however, it went one step further with simplicity and minimalism-- one thing immediately noticeable to users is that the desktop is locked, ensuring that the desktop background is not cluttered with files. Minor things are also taken very seriously by the Elementary OS team, and even things such as the header bars of windows receive a very detailed analysis.

The team at Elementary OS have just released the first beta for the latest iteration, Freya (formerly known as Isis), and it is already looking extremely polished. Introducing a newer design language such as a unified header (or in some cases, removing the header altogether) and adaptive UI elements, such as the status bar's opacity. The icons have also been updated, new screen transitions, and various updates to the Elementary apps (such as the Noise media player, Calendar, and the Midori browser). Freya is based on Ubuntu 14.04.1, and as such, inherits core components such as the 3.13 Linux kernel and various hardware drivers. Doing away with Grub, it also includes support for EFI which allows the user to boot directly from EFI.

According to the Elementary OS team, some programs are recognizable by their appearance, so a title bar would act as just visual noise.

As an operating system, Elementary OS attempts to fill a void similar to that of Ubuntu's. It's difficult to deny that there is a fairly large learning curve when it comes to GNU/Linux, and some of the most common desktop interfaces such as KDE, GNOME and Xfce focus much more on being lightweight than being "modern" or visually polished. Ubuntu's Unity interface attempted to introduce a desktop interface that would make the learning curve much smaller and it has been extremely successful in attracting newcomers to the world of GNU/Linux. Elementary OS takes it one step further and includes the concept of minimalism and the outcome is something that is extremely polished and friendly to both novices and veterans.

The Elementary OS Freya Beta 1 can be downloaded from the links provided here.

Here is a video from one of the developers excitedly demonstrating features from Freya back in April: