PC Gaming is a huge industry, in 2012, it generated $20 billion in revenue. It makes sense then that manufacturers would want to release high performance products for this sector, after all, the difference between a poor optical sensor and a high precision one could be life and death in the virtual game world!

Today I'll be reviewing the latest mouse offering from Zowie Gear that was supplied by Overclockers UK, the FK1. Priced at a penny under £50, the FK1 falls hot into Logitech's multi-featured gaming mice territory but does the FK1 have something different to offer for the price? Let's find out.

I will be comparing it to my current workhorse mouse, the Logitech G602. I know some folks will snap to attention at reading this and ask why I'm comparing a high performance wired mouse with a wireless one but I feel it's a fair enough comparison as they both boast precision optical sensors for their class and offer a contrasting range of features. Both are also similarly priced but differentiate themselves in form factor.

The features alone won't wow veteran PC gamers out there as they're nothing that has not been seen before. The FK1 does have a few qualities that set it apart from other brands though. The ability to use it out of the box without any drivers or software to change DPI is one of them, as well as the ambidextrous design.

This is more of a personal thing but in the past I've seen mouse boxes that are too complicated for their own good; lashings of acronyms and specifications all over and other marketing blurb. Zowie went the right way about their packaging and gives you exactly what is needed to be known about the FK1 in an easy to understand way. 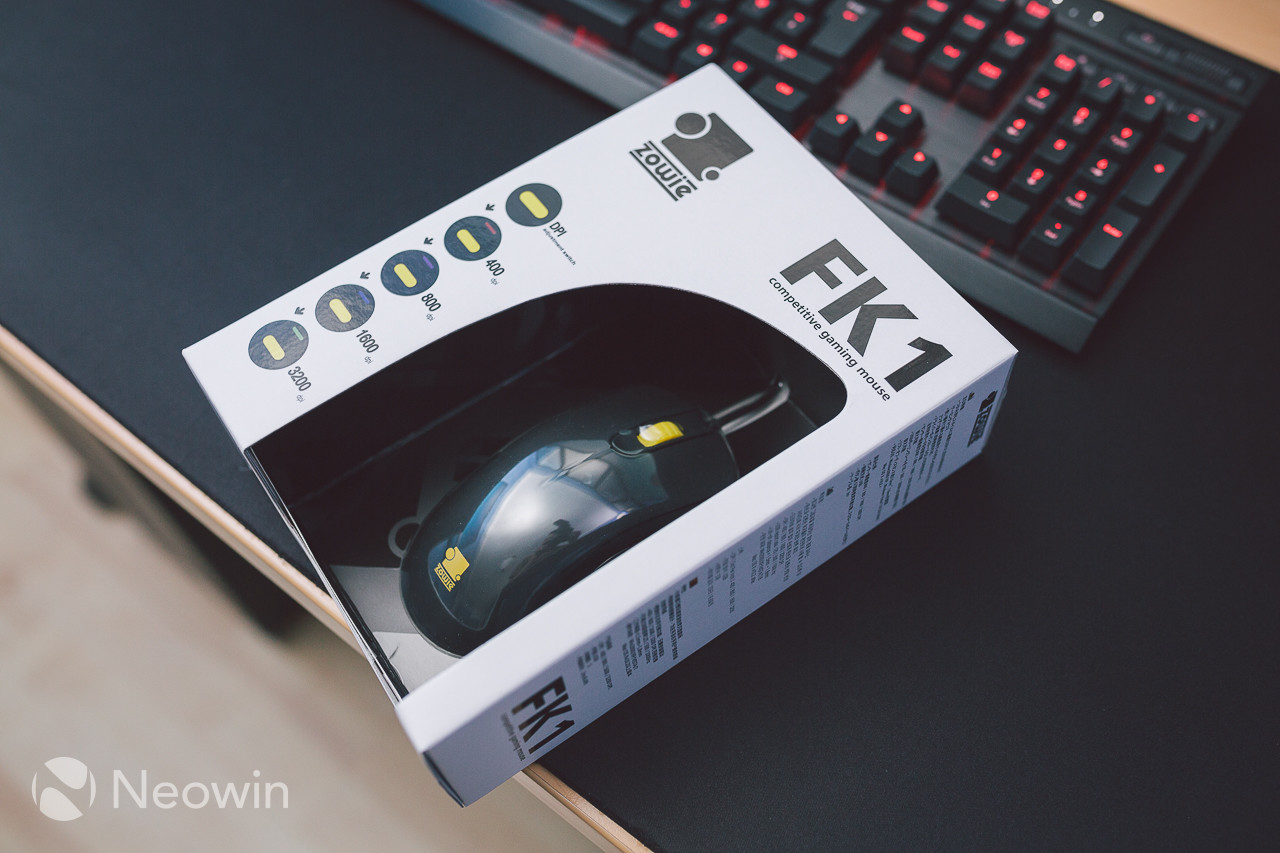 There aren't a mass of accessories inside the package, in fact, the only actual accessory supplied (unless you count the decal as an accessory!) is the spare pair of Teflon feet for when the ones on the mouse wear out. A welcome addition in my books. Does the average gamer need more stuff in the box in this price bracket? I suppose, but that is open for debate.

It's important for a mouse to feel good in the hand and not be too bulky in both form and weight. For precision gaming, this is vital, especially for twitch movement gamers.

I'm happy to find that the FK1 not only feels great in the hand but it's also lightweight. I've owned a lot of high end Logitech gaming mice over the years and one thing that I always found with them was that they arch into the palm more than other similar in class mice. The wireless ones also carry a bit more weight due to needing 2x AA batteries, although, newer models can use just 1. 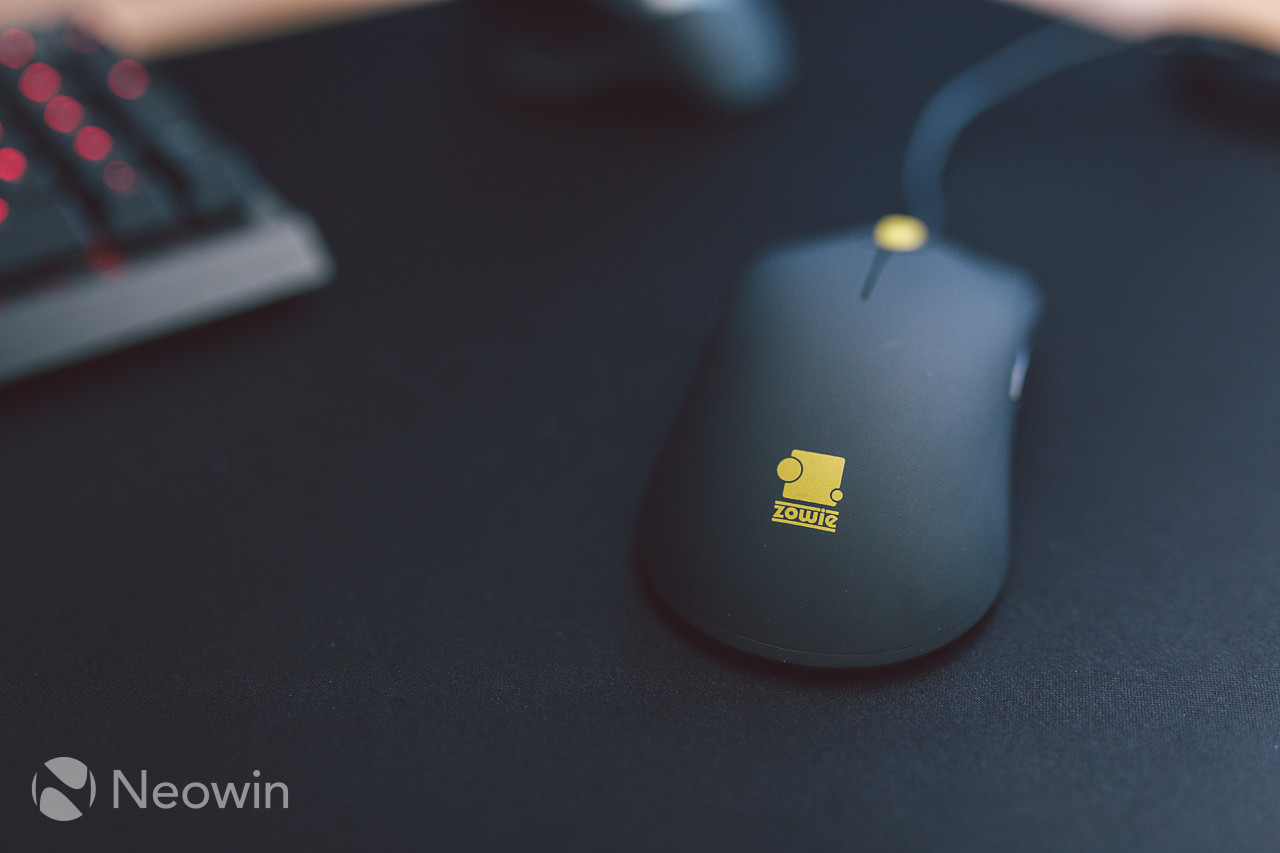 The finish on the FK1 is a matte texture that offers good grip and tactile feel all around the surface. The wheel is rubber and coloured yellow. Sadly, it does not glow in the dark or light up as I initially imagined it would. Maybe I'm just too used to seeing anything bright coloured being lit up with LEDs though.

On the whole, I found the FK1 to be all round excellent at everything I threw at it. I did observe a couple of quirks though. Whether this unit left the factory with a few issues, I don't know, but the mouse wheel has an erratic scroll up action. The wheel will miss a scroll on scrolling upwards meaning it misses a scroll and so requiring two scrolls. This meant that in a game I might go to switch weapon and find that I have to scroll the wheel twice before anything happened.

I also found that the left and right primary buttons required more pressure to click than any other mouse I've ever used. This may  be by design as you don't want to accidentally press a button while resting a finger on one; It took some time to get used to this for games like Team Fortress 2 where I play Sniper class most often. I'm used to hovering over the left mouse button and gently but quickly tapping the button once my scope crosshair is tracking a Scout as he runs around.

I missed the first few kills but once I'd adapted to the extra pressure required, I was able to track and kill running Scouts no problem. For me, that is the benchmark for a good mouse, to be able to snipe a running Scout in TF2 isn't easy especially when his team is on the ball providing support. I can do it with the G602 but that took some weeks to months of practice. By comparison, I adapted to the FK1 in a few hours.

I joined mid game on a server for my first game of TF2 which resulted in coming 3rd place on the scoreboard netting 12 kills and only 1 death. Thank you Zowie, I'm liking this mouse already...

Outside of gaming, I edit photos a lot, so an accurate sensor is a strict requirement for my uses. I found no problem with the FK1 in this area and was able to trace layers and apply adjustment brush fine touches to my photographs just fine. The DPI adjustment worked well for this too, at 400 DPI the cursor moves slowly but smoothly and gave me precision for tracing around faces and objects. 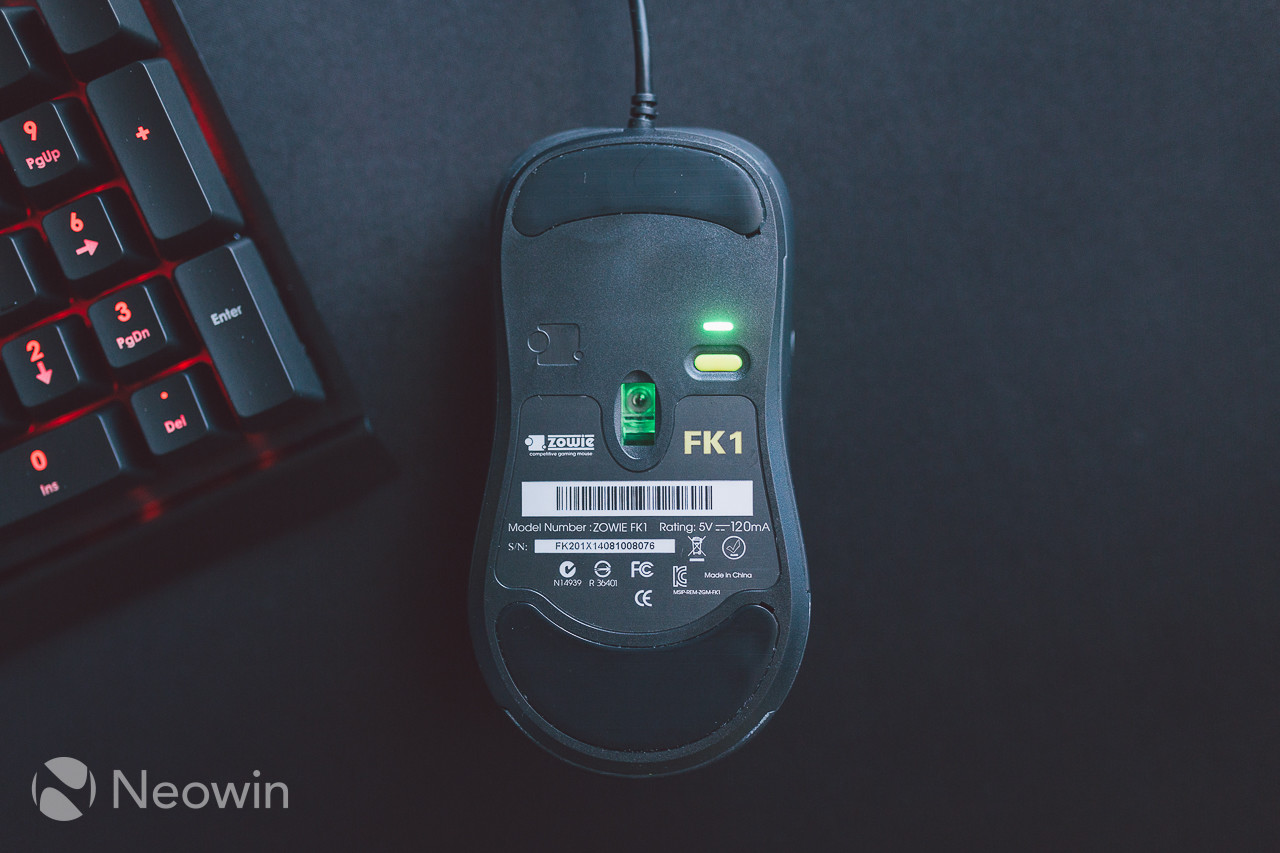 Speaking of DPI, I found the most useful DPI to be 1600. 3200, for me personally, is a bit too much, whereas 1600 offers the best blend of accuracy and cursor speed for both gaming and desktop use. I like the fact that the DPI indicator has a single colour changing LED on the underside of the mouse. A quick lift of the mouse tells you exactly what DPI it's set to once you get accustomed to the different colours denoting the DPI. The LED is bright enough to be seen even on a black gaming surface like the one photographed but not bright enough to leak light through the upper surface holes of the mouse. 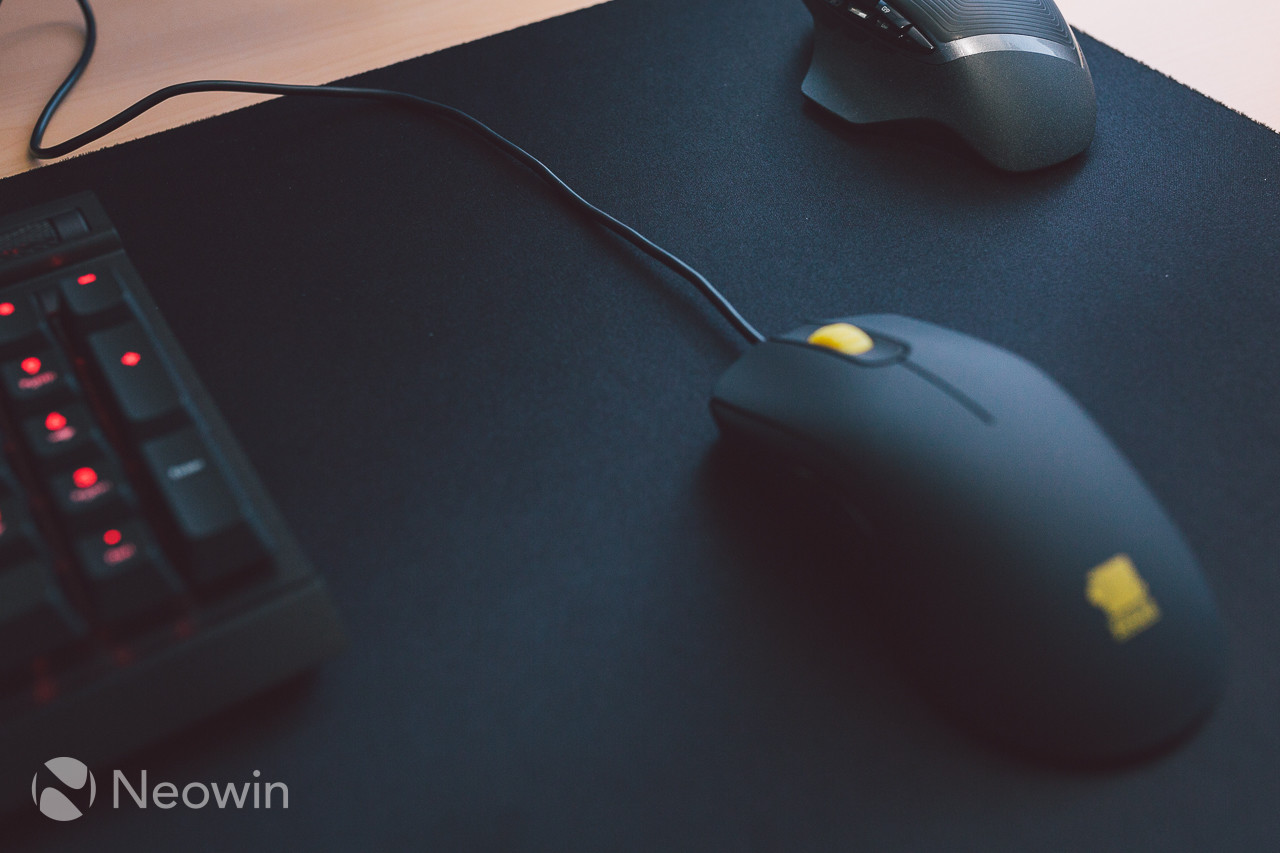 The cable on the FK1 is rubberised and I found on both desk and mouse pad that it did snag due to the friction of the rubberised finish. Initially I thought this might be a deal breaker but in actual use, it wasn't something that I noticed much at all once attention was on the game. Different surfaces might have different levels of cable drag friction, so it's worth keeping this in mind. Readers will be able to see how much of the cable drags on the above photo.

I guess it would have been nice if the cable was finished in a smooth outer layer or if it was a detachable cable instead so gamers could use their own preferred cables. The third party USB cable market is thriving with all sorts of cable construction variations.

Compared to the G602

In terms of primary surface area, there's not too much difference between them. The G602 crams in buttons all over the left side while the FK1 makes simplicity a priority and has a minimal button layout. There are no additional LED lights either or model branding other than the main yellow logo on the rear.

For weight comparison, the FK1 is 90g whereas the G602 is a heftier 130g with 1xAA battery inserted. Due to the shape you don't notice the weight as much, although, some gamers probably won't like this as it means claw gripping a G602 style mouse can be difficult. 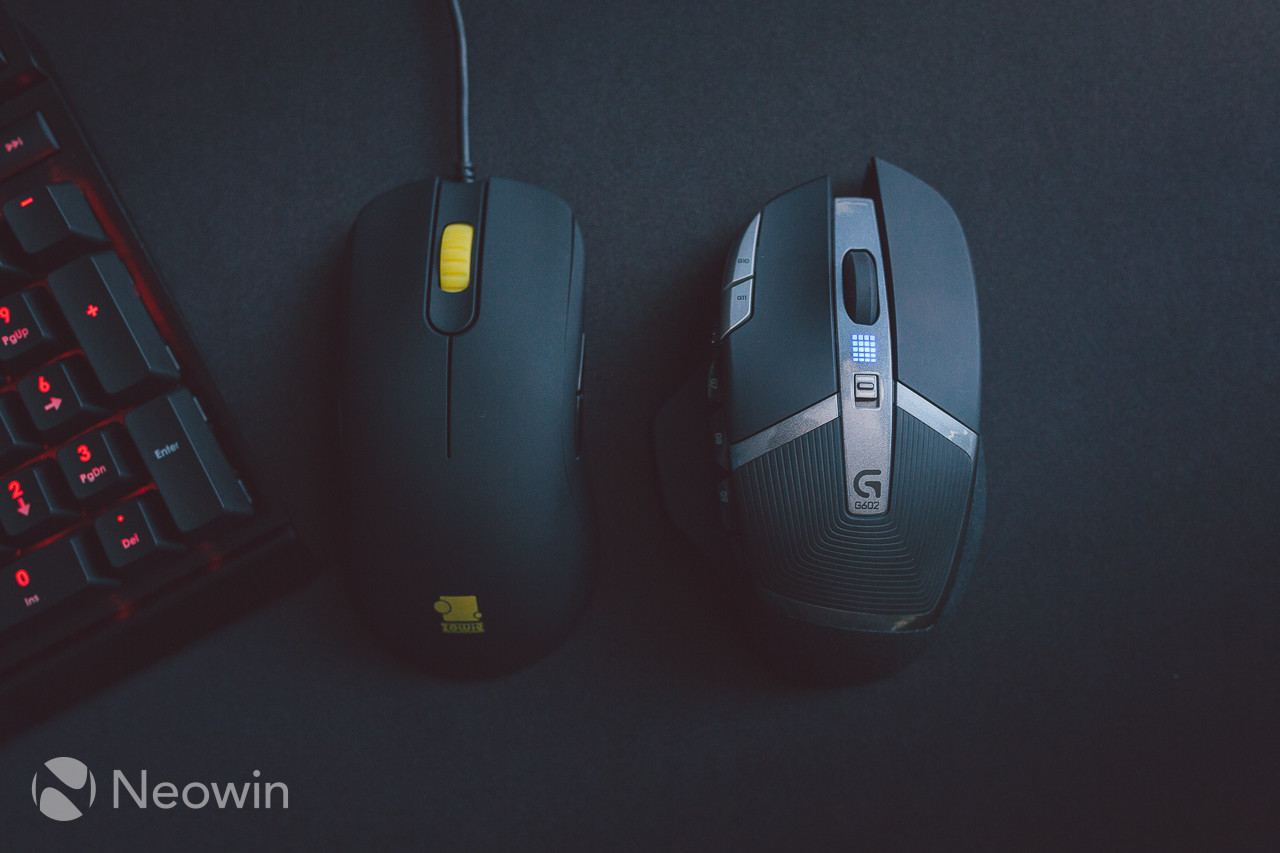 At the start of this review I asked whether the FK1 offered something different from the competition for the price. In many ways, I think it does. It has an extremely accurate optical sensor with onboard DPI adjustment and doesn't need any installation driver or software to work. My unit has a strange bug with the wheel, as mentioned, but I am betting this is a one off issue with a faulty unit rather than a widespread problem and the higher pressure needed to click the primary buttons does seem to by design.

I found my gaming performance improved a bit over the G602 but I do want to touch on the subject of wireless vs wired as it is something that crops up often in online debates as to which is better.

From my usage of both side by side, I found the G602 and FK1 to be nearly identical in sensor accuracy to each other. I was able to make fine movements and traces in Lightroom and Photoshop to confirm this and input lag from the G602 is a non-issue due to the dedicated high bandwidth RF system Logitech use for their higher end mice. Any differences I did notice were down to the extra weight of the G602. Quick physical movements were that bit quicker on the FK1 due to it being a featherweight.

For my own use, I would like to have seen a few more buttons on the mouse though; there are 2 side buttons on each side of the FK1 and no others. I'm used to having the ability to map one for Mumble, two for Fraps, one for the STEAM overlay/screenshot features... You get the idea.

Overall, I have come away impressed with the FK1. I didn't expect to like a wired mouse having used wireless for so long but the light weight feel combined with that brilliant sensor made for a really good gaming experience which has obvious benefits among enthusiast and competitive gamers alike.