Right at the high end of HP's lineup sits the Envy series, and the latest is the Envy 14. This is a pretty great machine. First of all, it's got a new 16:10 display, so it's taller than your average 14-inch laptop.

It's also pretty powerful, considering that it's a relatively small PC. First of all, as you'd expect, it has Intel's 11th-generation 'Tiger Lake' processors with Iris Xe graphics. However, this model also comes with dedicated graphics in the form of an Nvidia GeForce GTX 1650 Ti with 4GB GDDR6. It's impressive.

The HP Envy 14 looks like, well, an HP Envy. It's made out of all aluminum, unsurprisingly. Stamped in the lid of this silver laptop is HP's premium logo, as opposed to the circular one that shows up on more mainstream PCs. 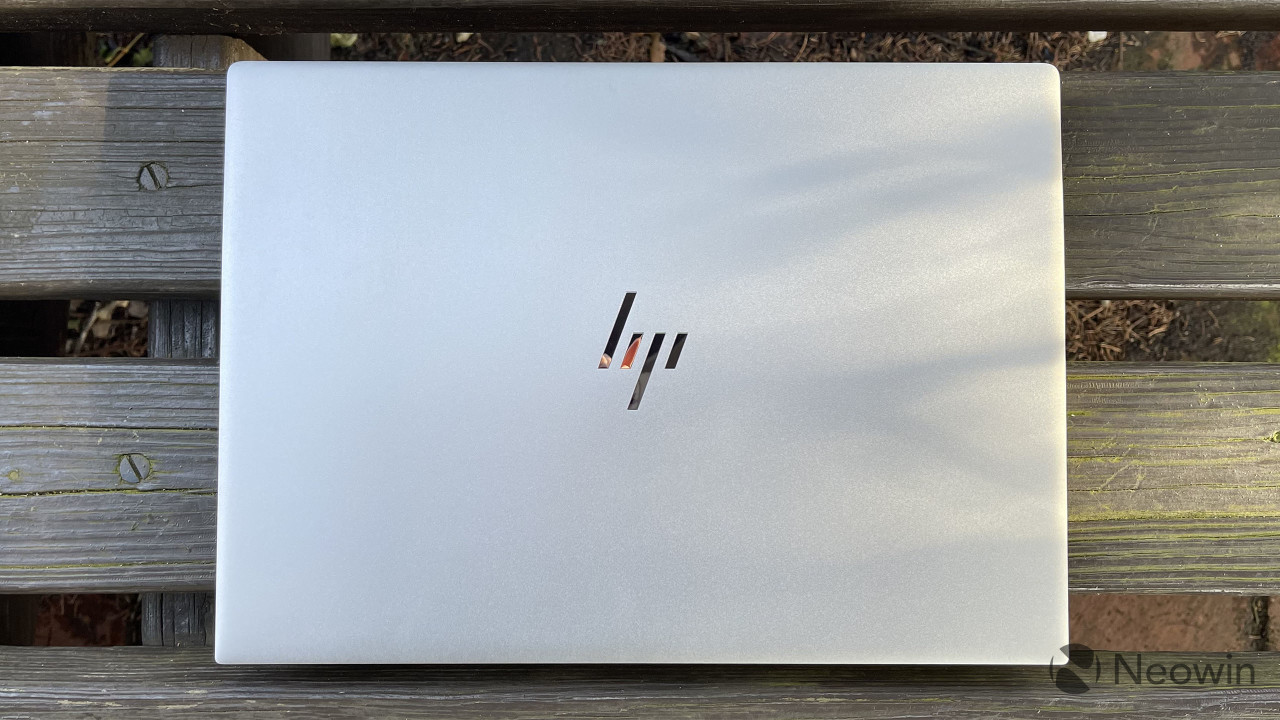 One thing that really bums me out is the lack of color options here. I'm not a fan of silver, and I realize that I'm outnumbered on this one. HP killed the Natural Silver Spectre x360 one year and it had to bring it back by popular demand the next year.

But color options are something that I've praised HP for. When it comes to design, no one tops HP. Its Spectre x360 series is the most beautiful stuff that exists in the portable PC market. It has colors like Nightfall Black and Poseiden Blue, and Nightfall Black has even made its way over to the Envy lineup. 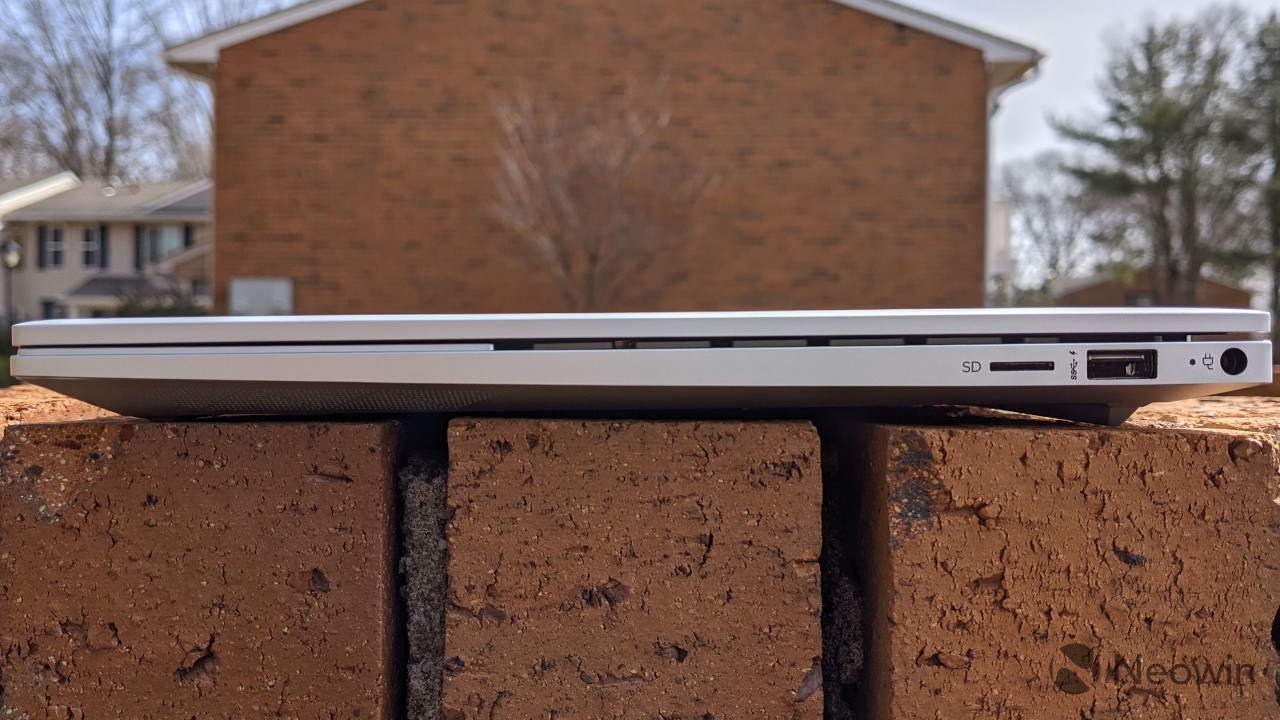 If you look at the front of the machine, it also doesn't have the chamfered edges that we've seen from other devices, which make it easier to open. It's pretty much flat on all sides, which isn't necessarily a bad thing, but this feels more like 2018 HP than 2021 HP.

On the right side of the device, you'll find a USB 3.2 Gen 1 Type-A port for 5Gbps data transfer speeds, and a microSD card slot. You'll also find a pin charging port for the 135W charger, as USB Type-C Power Delivery doesn't support 135W. The good news is that if you're willing to charge it slowly, you can still use the USB Type-C port. 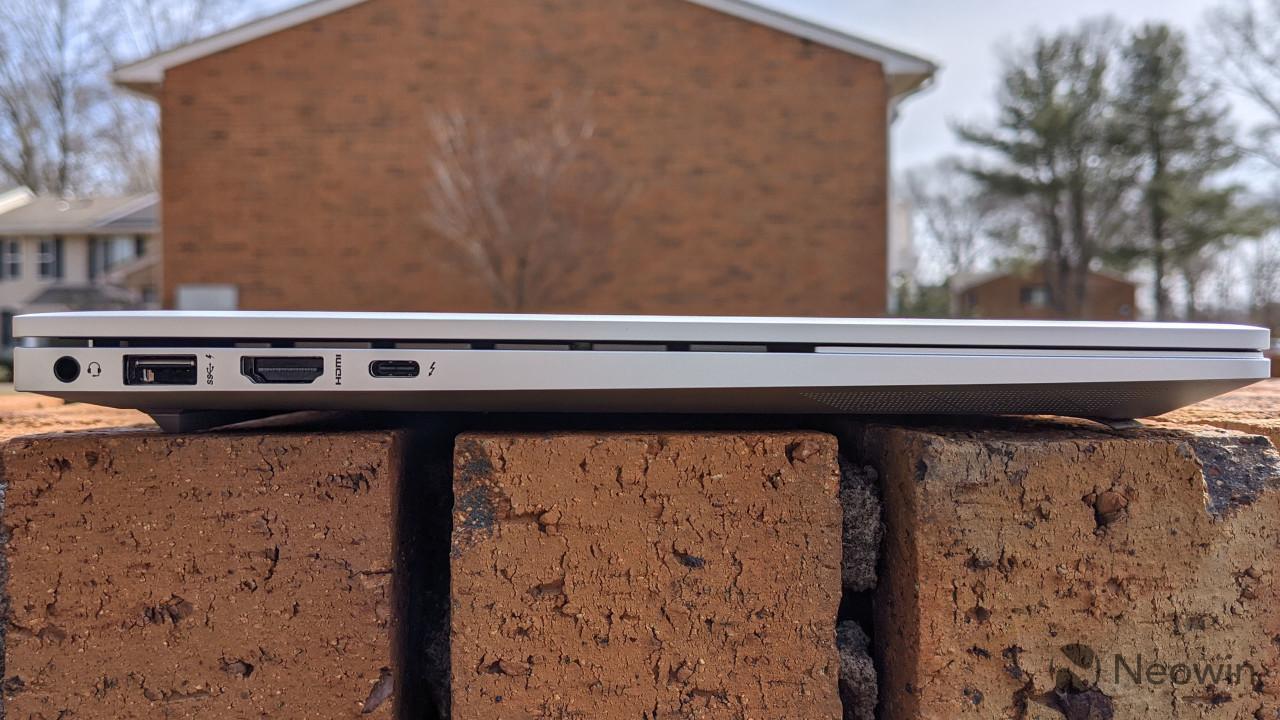 There isn't much of a difference between Thunderbolt 3 and Thunderbolt 4. Thunderbolt 3 supported 40Gbps data transfer speeds, dual 4K monitors or a single 8K monitor, and external GPUs. But there was also a Thunderbolt 3 base spec that allowed PCs to use two lanes instead of four, so you'd only get 20Gbps speeds, or support for one 4K monitor. The big problem with Thunderbolt 3 was that when buying a product, you actually had no way of knowing what you were getting.

With Thunderbolt 4, the base spec is the same as the full spec for Thunderbolt 3, so there's no question about the capabilities of the PC that you're spending over a thousand dollars on. Some previous HP Envy generations did have Thunderbolt 3, but I was unable to get an answer on whether they used the 20Gbps base spec or the 40Gbps spec. 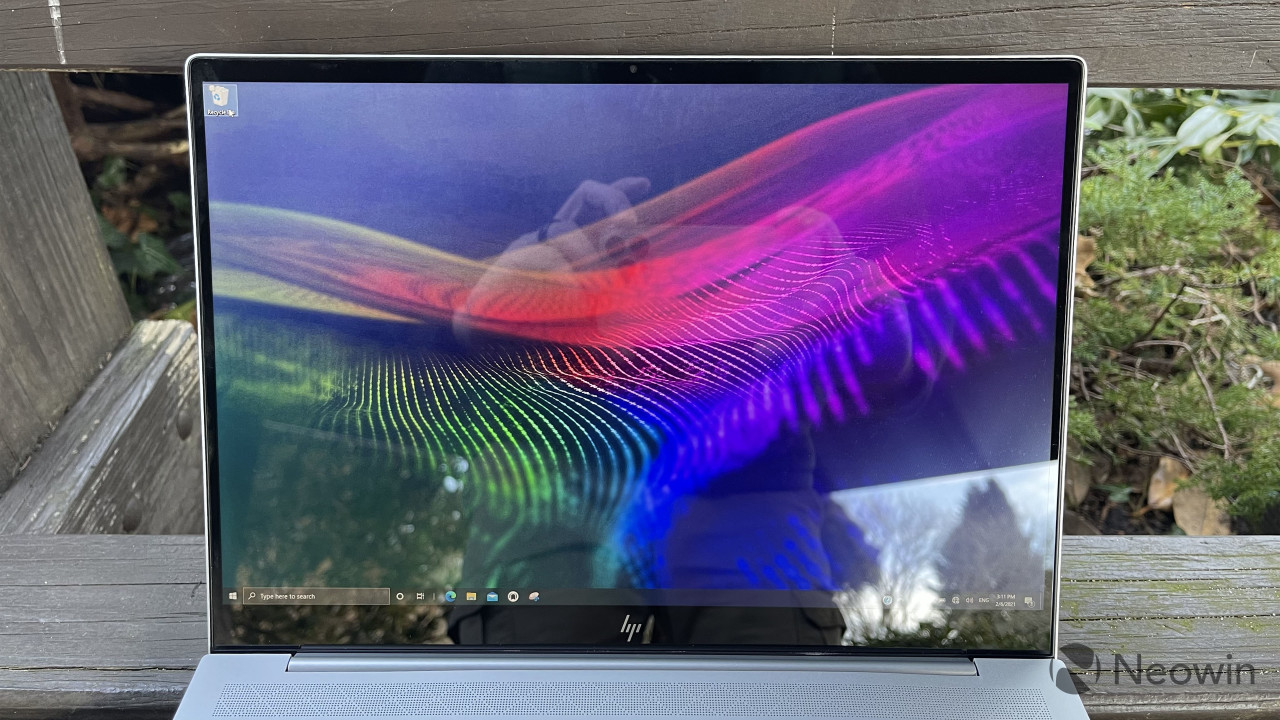 This is also HP's first 14-inch laptop with Delta E

HP also has an app called HP Display Control that runs in the background. The app was originally built for when the Spectre x360 first got an OLED version, as OLED displays tend to have very vibrant colors which are pretty but not particularly accurate. Now, we're seeing it on a broader range of PCs. It lets you choose certain color settings, which can be optimized for photo and video, not optimized for anything, or just optimized to be vibrant. There's also a new Auto Color mode which adjusts based on what app you're using. 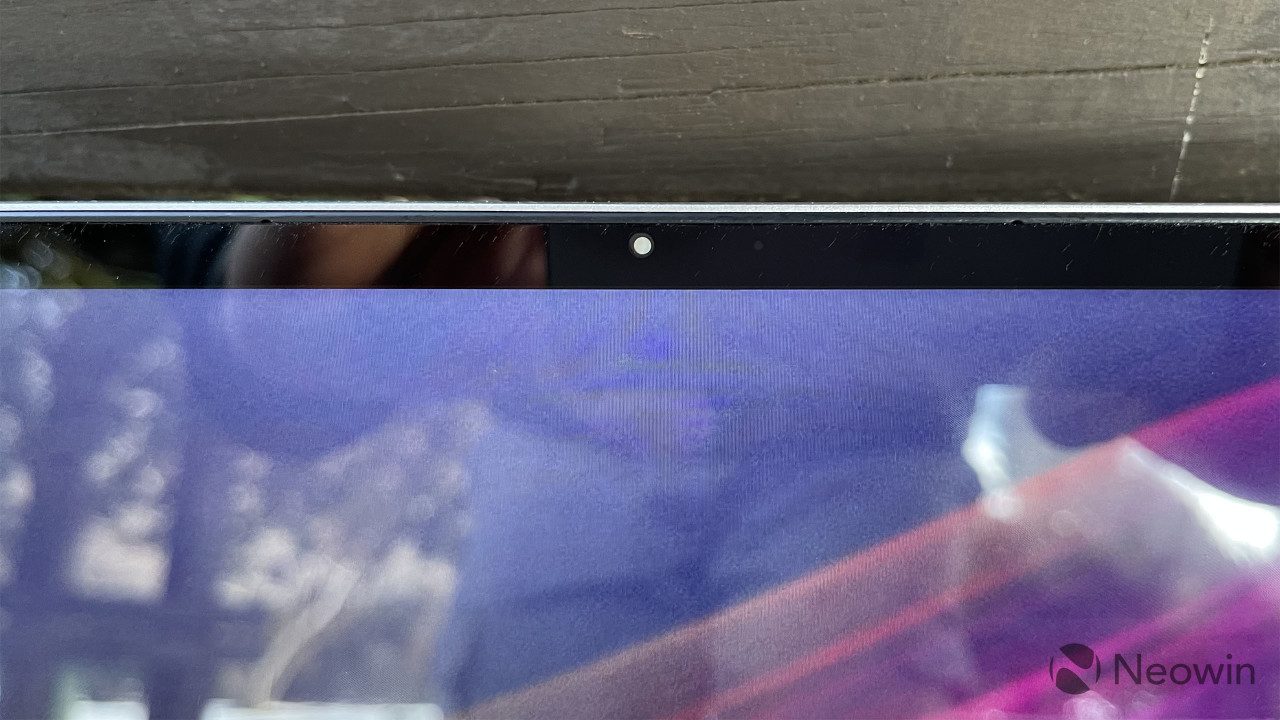 The bezels are relatively thin all around, and you'll find the webcam in the top bezel. There's also a physical privacy guard, which can be controlled with a button in the keyboard. HP does have a physical piece that covers the webcam, as it used to just disconnect it internally. But apparently for a feature that's built on distrust, it needed a physical barrier. 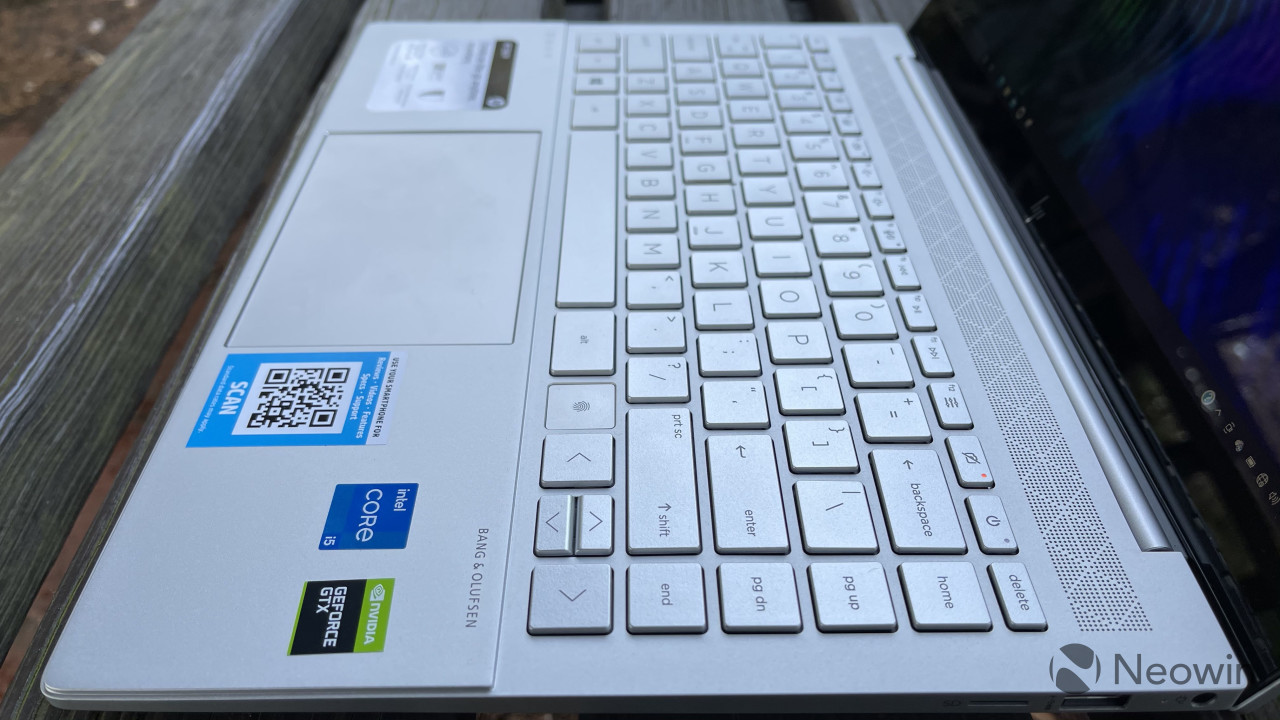 Right above the keyboard, you'll find Bang & Olufsen speakers, and you'll find them on the bottom too. The audio quality on this machine is great. It's clear and it gets nice and loud. It always pleases me that HP focuses on the audio experience, because it's a necessary complement to a media streaming or a video editing experience. In fact, in today's era of working from home and having video calls, that's important too. Unfortunately, the webcam is only 720p still.

The keyboard on the Envy 14 is pretty straightforward. It's a backlit Chiclet-style keyboard, and it feels really comfortable to type on. HP used silver-colored keys for this one, which is pretty on-brand for them with a silver laptop, and I've got no complaints. 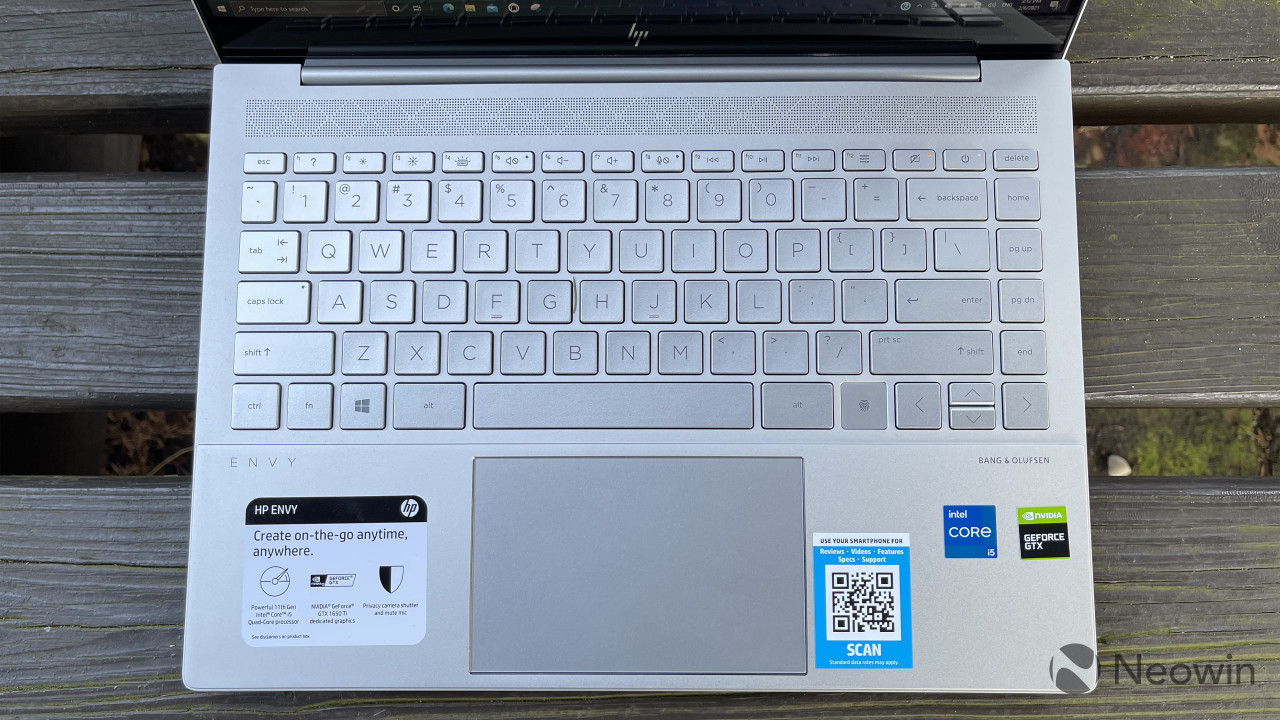 HP is continuing its trend of putting all of the buttons in the keyboard. As you can see, there's a fingerprint sensor on the bottom-right, and on the top-right, you'll find both the power button and the camera privacy guard button. Those two buttons actually have lights on them to indicate when they're active. 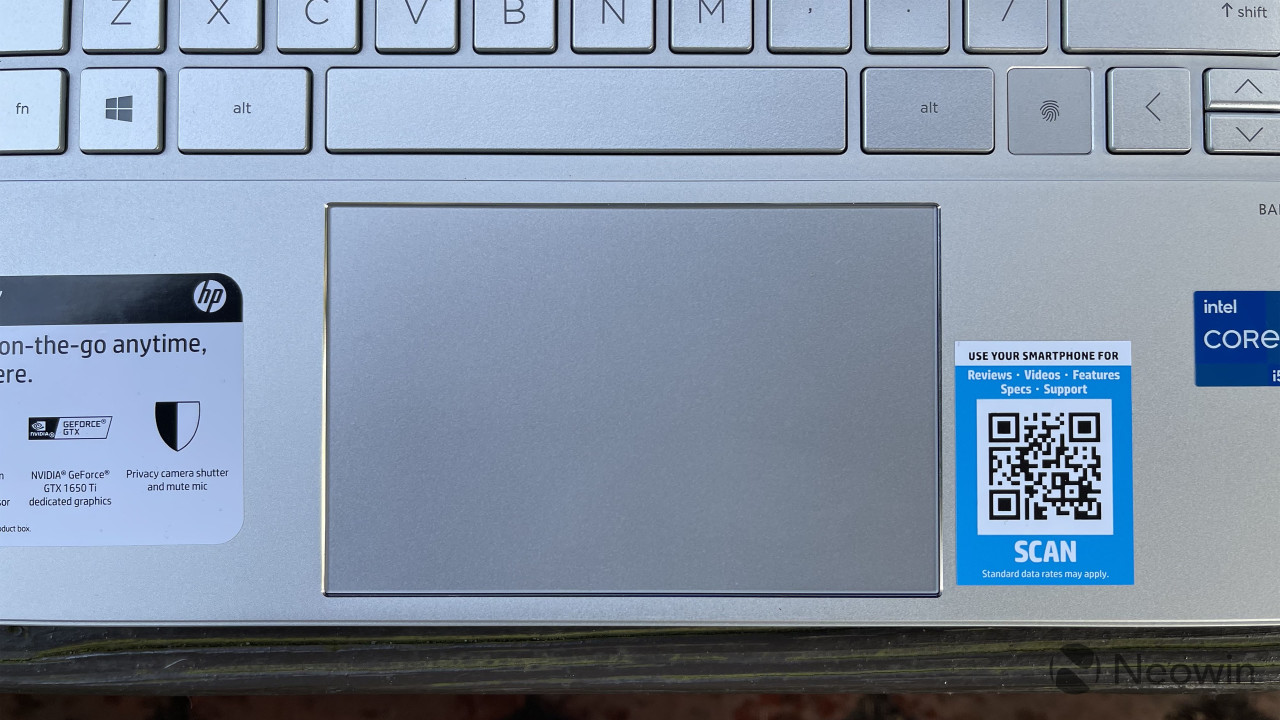 The Envy 14 uses a Microsoft Precision touchpad, which goes without saying for most brands. HP only made the switch to Precision touchpads fairly recently, and it was the last major OEM to do so. Precision touchpads basically exist to solve a problem that Windows laptops had a long time ago, which is that they were horrible. These are faster, more responsive, and support proper gestures. Also, on a side note, I like that this one is relatively large, making use of most of the available real estate.

The model that HP sent me includes an Intel Core i5-1135G7, 16GB RAM, a 256GB SSD, and an Nvidia GeForce GTX 1650 Ti. It's a pretty powerful machine considering the relatively small footprint.

The CPU is one that you'd normally find in a regular ultrabook, rather than the 45W type of chip that's normally paired with dedicated graphics. Presumably, the footprint is too small to use a 45W processor, and there would have to be significant engineering with the thermals to make that work. But Intel's Tiger Lake processors are good, really good. 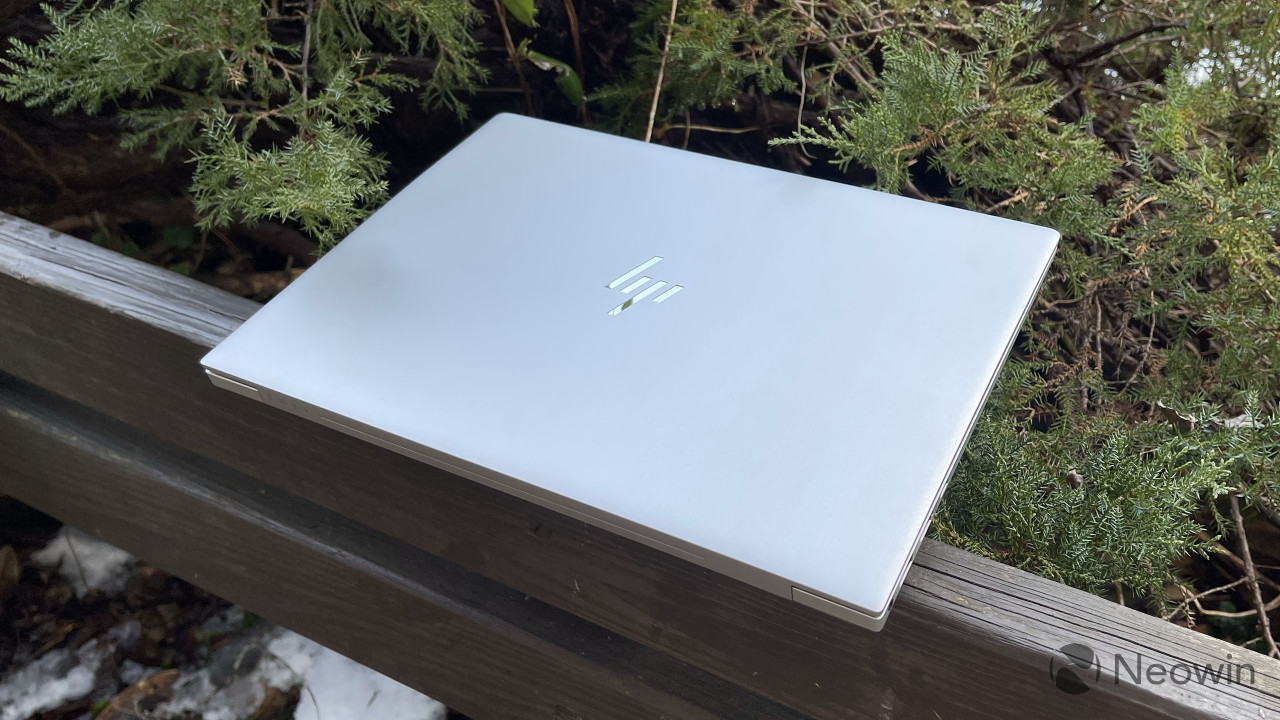 The Core i5-1135G7 comes with Intel Iris Xe graphics, which is also really good. The i5 has 80 execution units, while the Iris Xe graphics in the Core i7-1165G7 has 96 EUs. Obviously, you don't have to worry about that too much since this machine has dedicated graphics, although it's worth noting that the base model still includes integrated graphics.

Battery life is OK, all things considered. I got about six hours of real-world usage out of it, and that includes working in the Edge browser, using OneNote, and then having other apps like Skype, Slack, and To Do open. I even did some light Photoshop work in there. I'd have liked for it to do a bit better, but with powerful components, there's only so much that I could ask for.

For benchmarks, I used PCMark 8, PCMark 10, 3DMark, Geekbench 5, and Cinebench.

This is a bit of a unique machine, having a CPU that's made for ultrabooks and still including GTX graphics, so it was a bit hard to think of what would be the proper machines to compare it to. I went with another variant of the HP Envy, which has AMD Ryzen 4000, and the Surface Pro 7+, which has similar specs but without dedicated graphics.

The HP Envy 14 is an excellent PC. It has an accurate display for creators, along with the dedicated graphics that they need. And at $1,249, it's an incredibly good value. 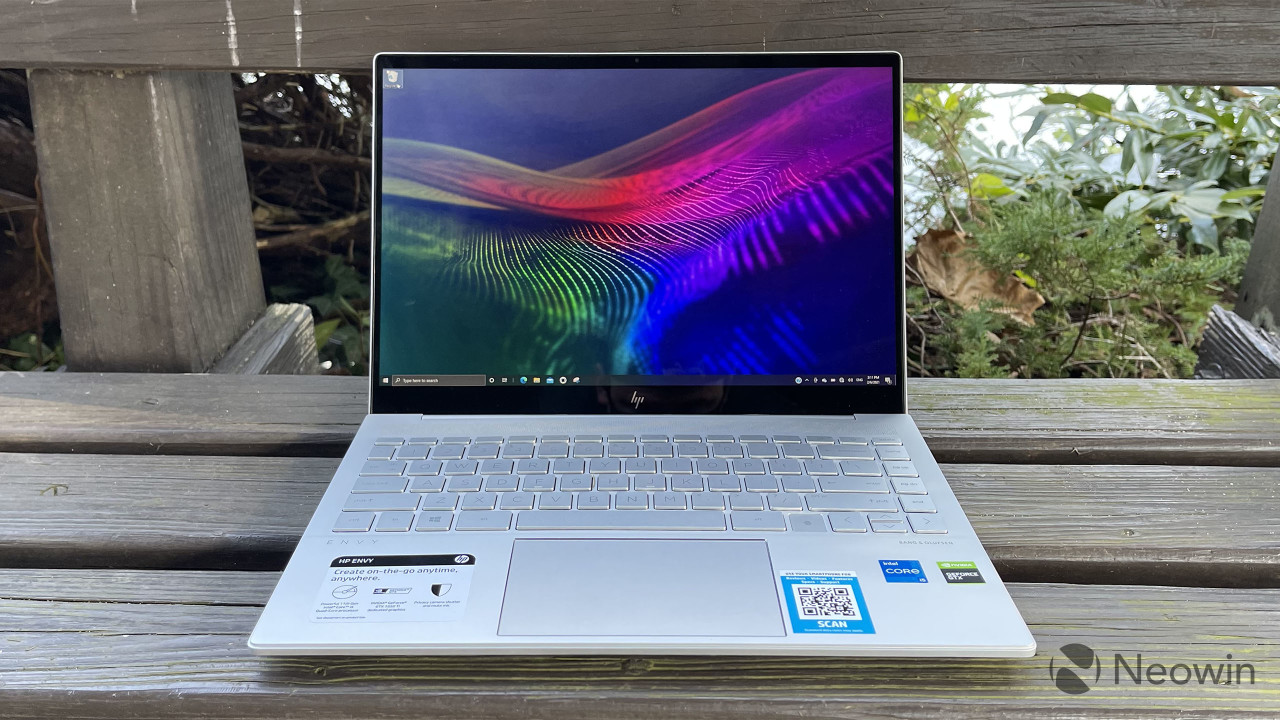 It's not perfect, as I've pointed out throughout the review. In today's work from home climate, I'd like to have seen an FHD webcam, and for that matter, 4G LTE would have been nice as well, considering how much HP has pushed cellular in other products. And of course, I'd really like to have seen those fancy colors like Nightfall Black.

But here's what you do get from the Envy 14: an all-around great PC. It's got value, it's got power, it's got an excellent display, and the keyboard is great. It's not the flashiest PC in the world, but if you want that, I'd definitely recommend having a look at the HP Spectre x360, which is the sexiest PC on the planet.

If you want to check out the Envy 14, you can find this configuration on Amazon.