Earlier this year, I reviewed the NOMU S30, which has remained the company's rugged flagship smartphone. Featuring a waterproof and dustproof design backed up by its IP68 certification, it seemed to tick all the boxes for those looking for a handset packing somewhat decent specs but could also deal with a bit of punishment. However, the S30 did have a bit of chunkiness and heft about it which may have been off-putting for some.

NOMU went back to the drawing board and has come up with a smaller version of the handset. Dubbed the "S30 mini", the smaller device has cut down on the size and weight of the S30 but has also pared back some of its other underlying specifications. But, at around $75 cheaper than the S30, the mini may be more of an attractive purchase at its standard retail price of $175.

Anyway, while this review very much focuses upon the NOMU S30 mini, I will make relevant comparisons to the standard S30 to highlight significant points of difference between the devices.

The S30 mini packs a smaller 4.7-inch display compared to its larger sibling that featured a more generous 5.5-inch display. While the physical screen size was a sacrifice that had to be made to fit within the smaller chassis of the mini, the resolution of the screen has also been knocked down from 1080p to 720p. For those of you who may be used to the "retina" resolutions on smartphones, this may be disappointing as you can start to see the individual pixels. That said, that's not the selling point of this particular device.

Unfortunately, I did notice some display artifacts out of the box towards the center of the screen that affected the edges of some app icons and some lettering. Oddly, these issues did not appear in screenshots captured on the phone itself which leads me to think this is perhaps something driver related and, if so, potentially correctable with a software update.

Graphical oddities aside, the display does its job and, on the plus side, a lower resolution screen is going to place less of a demand on the non-replaceable 3,000mAh battery.

Coming in at 190g, the S30 mini incorporates the same design cues as the S30, with rubberized corners, metallic edges on the left and right, and a durable carbon fiber battery cover. Underneath that is a smaller cover with a rubber gasket that seals the two SIM cards and a microSD card from liquid and dust ingress. If there is a single weakness in this design, it's going to be this internal cover as, if you forget to reinstate it after inserting a new SIM or microSD card before dunking the phone in water or mud, then you could well get into strife. This risk was pretty much mitigated with the S30 which incorporated the gasket into the single removable cover on the back, so this seems to be somewhat of a regression on the mini.

However, the mini does feature a couple of improvements with the inclusion of waterproof micro-USB and 3.5mm stereo ports on the top of the device, saving the hassle of having to undo and refasten the port covers every time you need to use them.

In any case, the carbon fiber texture on the back cover is a nice finish and the fact that you don't have to put an extra bulky protective cover on the device is also a plus, given that the phone can put up with drops and tumbles.

However, in terms of a drawback, I'm not a huge fan of the somewhat prominent NOMU logo and bordering on the front of the phone below the screen. While some may find the placement useful in determining the correct orientation of the device given the implementation of on-screen buttons for navigation, I thought that it drew unnecessary attention to an otherwise clean front panel and should have perhaps been put on the rear of the device.

The NOMU S30 mini includes an 8-megapixel rear camera that packs a Sony IMX219PZ Exmor R sensor with an f/2.0 aperture and LED flash in addition to a 2MP front-facing camera.

Photo performance was adequate and even though you could tweak the settings and enable HDR to try and wring out the best possible images from the device, most people are going to leave the settings on automatic, which was how I tested the phone.

While nowhere near the top of the pack when it comes to captured image quality, you could do far worse with other smartphones on the market. HDR did help bring a little more color depth to images but, compared to superior cameras found in handsets like the Lumia 950 XL that remains my daily driver, it's not in the same league.

One oddity I will mention, is that the camera made a small but noticeable noise when refocusing. While this didn't otherwise appear to make an impact to the camera function in the phone, I've not experienced this with other phones that I have reviewed or owned over the years.

Other features, additions, and omissions

The NOMU S30 mini features the same IP68 certification found in the original S30 and, in my informal testing, managed to survive the informal battery of tests I put it through. Having dropped the phone on the carpet countless times in the office from hip height, using it in the shower to listen to podcasts and audiobooks, and leaving it in the freezer overnight, the mini kept soldiering on as expected. 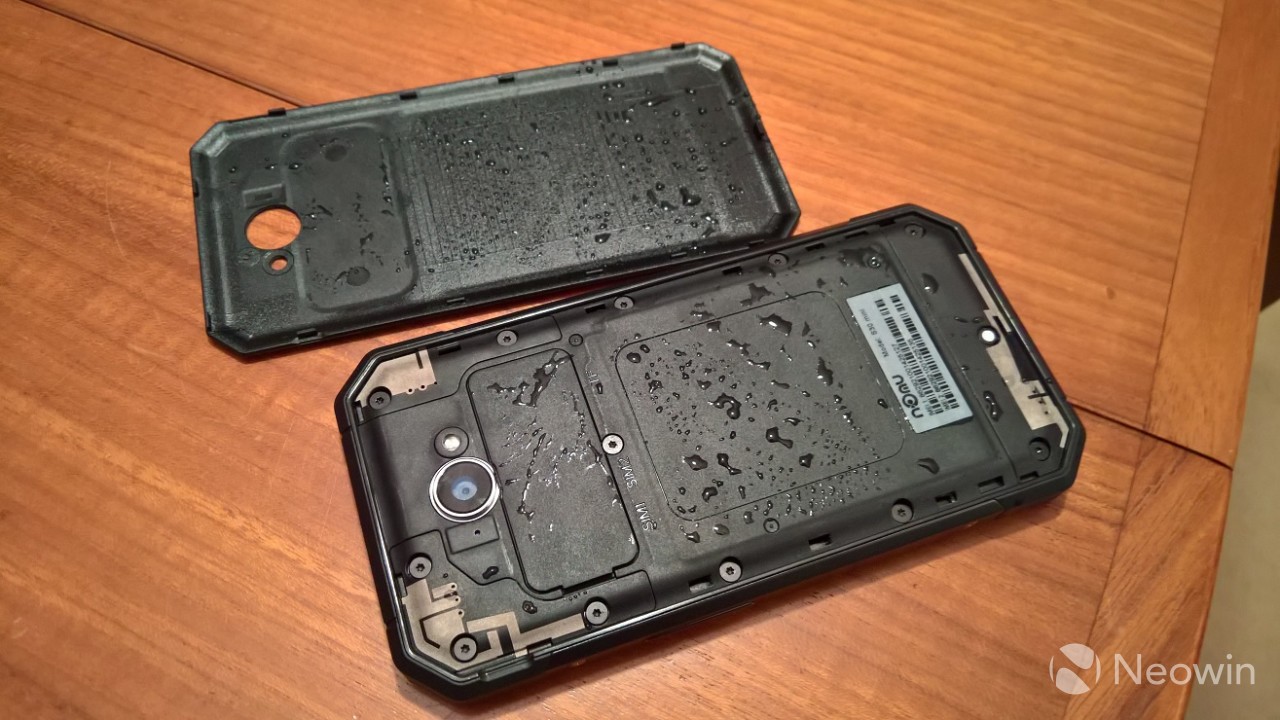 However, if the mini is immersed in liquid, you should be aware that it will get in under the carbon fiber cover leaving some residual moisture after being removed. It's probably a good idea to remove the cover afterward and give it a good dry just so you don't end up with excess liquid getting things wet like trouser pockets and nearby electronics.

As mentioned before, the S30 mini does away with the rubber gaskets for the micro-USB and 3.5mm stereo ports which may allay the fears of those worried about forgetting to securely re-secure the seals after use. I found myself appreciating this albeit minor feature given how frequently I had to dislodge the fiddly seals on the S30 to listen to music and charge the device. In fact, I'm surprised that the mini has waterproof ports, unlike the S30.

Perhaps the most glaring omission from the device is NFC functionality. I can only imagine with having to shrink down the device, maintaining ruggedness, and keeping costs down that NFC met the chopping block as far as included features are concerned. This means that if you're wanting a phone capable of being used at payment terminals, then the mini is not going to be a viable choice.

In terms of charging, power is delivered to the device via the micro-USB port and an included 5V/2A charger. From a flat battery, it took around 90 minutes to fully recharge the 3,000mAh battery which, for most people, should be manageable either when they go to sleep or during desk time in the office. Of course, if you're not using the included charger and just a run-of-the-mill USB port then it takes around six hours to achieve the same outcome.

For the time I used the phone, I generally found that I could get a little more than 1.5 days of usage before the battery ran out. This was with both Wi-Fi and Bluetooth activated, and a single SIM card installed, so battery life with a second SIM card installed may be slightly worse off in comparison depending upon cellular network coverage.

Unsurprisingly, the battery in the mini is non-replaceable which may be bad news for road warriors who will have to otherwise make do with portable charging solutions. This will also present an issue as the battery is progressively worn down as it will mean that the only viable solution will be to go and buy a new phone. While affordability is relative, spending $175 for a comparable phone in the future may not be as much of a bitter pill to swallow.

Similar to other phones in its lineup, NOMU has selected MediaTek as the SoC vendor of choice, with the S30 mini packing a MediaTek MT6737T 64-bit SoC which includes a quad-core CPU clocked at 1.5GHz. The phone also features 3GB of RAM which should be adequate for most users who do some light multitasking. For basic tasks like web browsing and hopping in and out of apps, the mini managed to cope fairly well. 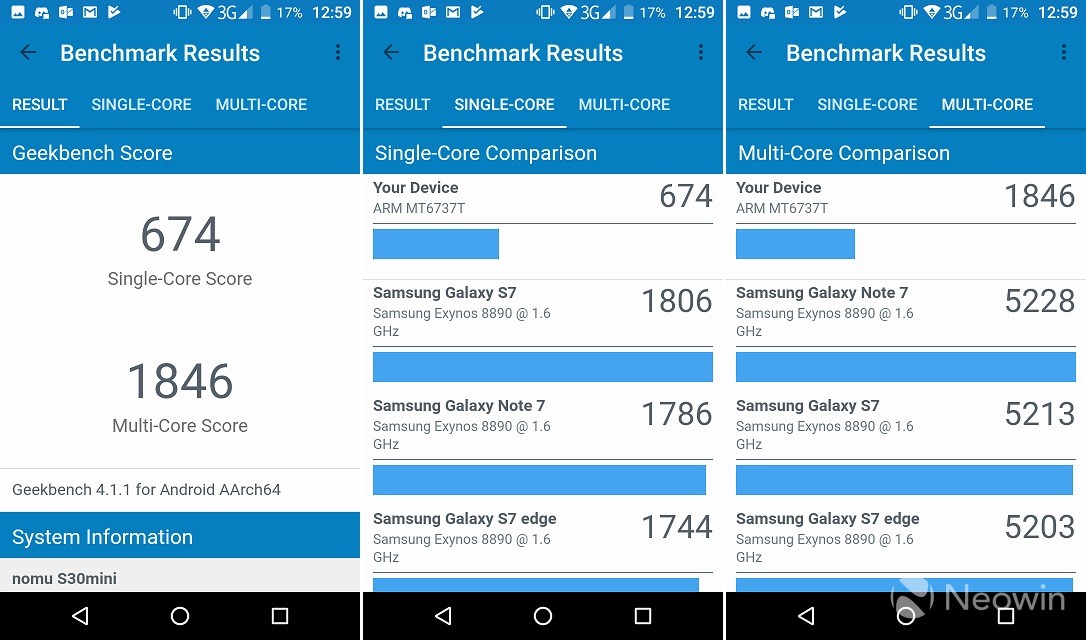 My typical daily usage involved using Facebook, Facebook Messenger, Instagram, Slack, Twitter, WhatsApp, Outlook, PowerPoint, and Excel, with some occasional use of Audible, Netflix, and Spotify. As mentioned previously, I only operated the device with a single SIM installed in the first SIM slot for the duration of my testing. 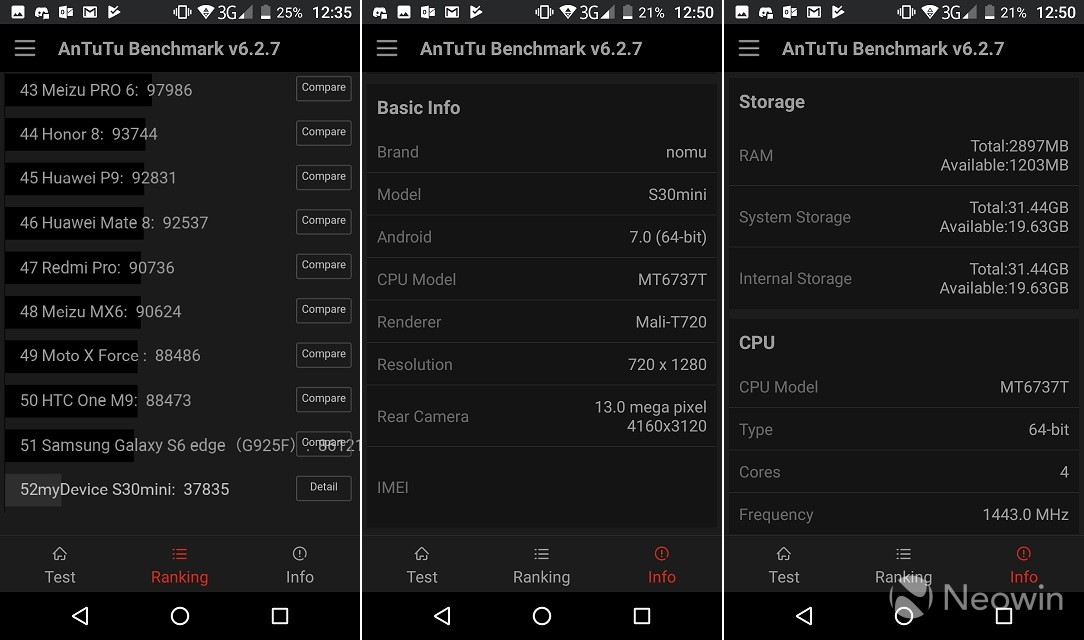 While I was a little worried about how games would play on the S30 mini after seeing a decent amount of stuttering in the 3D AnTuTu benchmark, the handset still managed to pull off mostly decent gaming sessions in Asphalt 8: Airborne and Bullet Force. There was a tiny but noticeable amount of stutter during light gameplay which became slightly more pronounced as the screen became more crowded with other players. The 720p display probably worked to the device's favor in this respect as a 1080p display with more than double the number of pixels may have made 3D performance less than ideal.

As with the rest of NOMU's smartphone lineup, it's all about toughness and durability, and in that respect I have no reservations as far as the S30 mini is concerned, aside from inviting user absent-mindedness as far as making sure the internal SIM card seal is put back in place after swapping SIMs or installing a microSD card. Given the regular S30 built the seal into the removable cover, it seemed like an unnecessary backward step that is just asking for trouble, particularly if parents give this otherwise durable device to curious kids who may like to fiddle with these parts.

The dimensions and weight of the device may appeal to those uninterested in larger phones becoming more popular this decade. The black finish on the device is a safe choice, and is perhaps the unspoken default as far as smartphone manufacturers are concerned; but the carbon fiber on the back adds a little flair and texture to stop it becoming "another glossy black phone".

At the end of the day, the NOMU S30 mini does provide a reasonable alternative to the beefier S30 if potential buyers deemed the latter to be too bulky, heavy, or expensive. However, buyers need to be prepared to make a sacrifice on critical specs such as screen resolution and size, four CPU cores, 32GB of onboard storage, NFC, 1GB of RAM, amongst others, to enjoy the smaller form factor. It effectively comes down to a numbers game with those looking for the most power opting for the S30 while those less concerned perhaps leaning towards the mini.

The review unit was kindly supplied by NOMU, and normally retails for around $175. You can check out more information about NOMU's other available products at their website.