We have seen PCs coming in a variety of sizes over the last few years from many manufacturers, but most of them aren't worth the sticker price and are good at only a few things. Now, here we have the $90 Wintel Pro CX-W8, better known as the Wintel Box, which is slightly larger than the numpad on a traditional keyboard and not too thick either. The device is indeed small, but still manages to pack an Intel Atom processor, 2 GB of RAM and plenty of connectivity options. Let's find out whether these specs, and support for Windows 10, can make it a good low cost PC or if it's just another forgettable product. 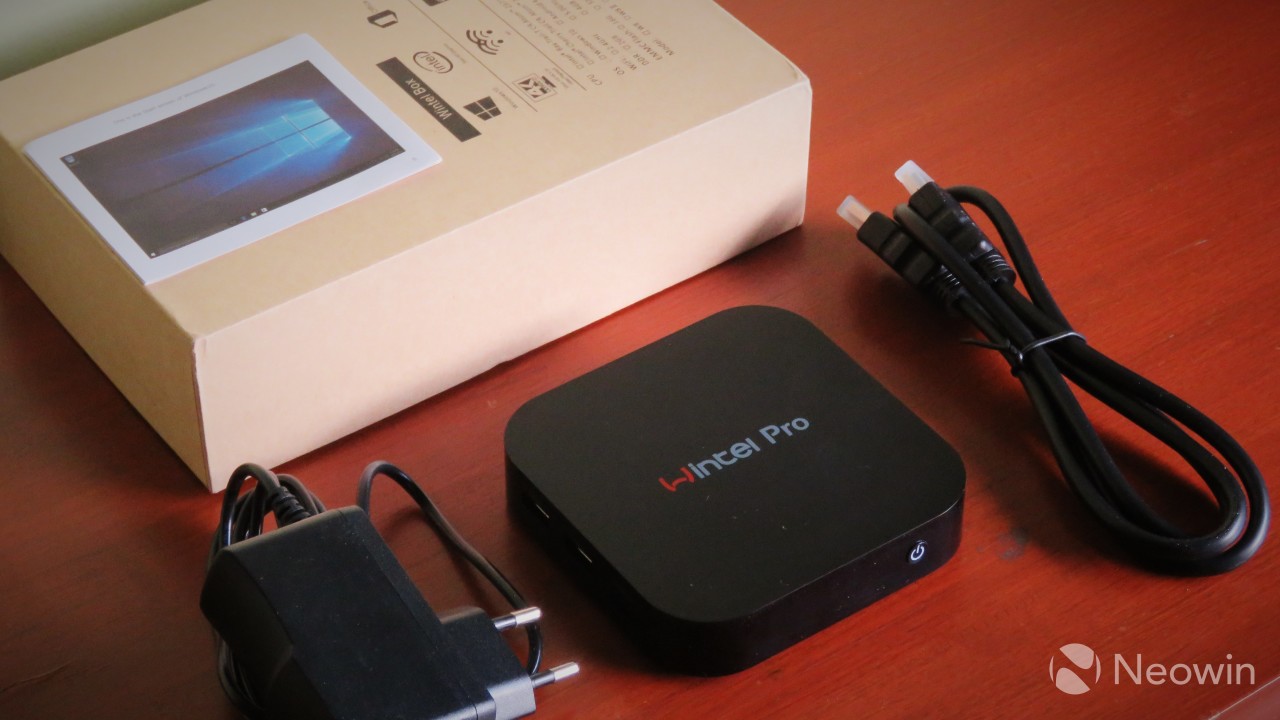 The review unit provided to us came in plain packaging and the contents were minimal as well. Inside the box, it contained a DC adapter to power the device, a HDMI cable and a Windows 10 leaflet, apart from the actual product.

The Wintel Box is a very compact PC with an inoffensive design, that is basically a square block with rounded corners. Although it is on the lighter side at under 250 grams and is made of plastic, it does not feel cheap. There was no noticeable creaking noise or looseness. 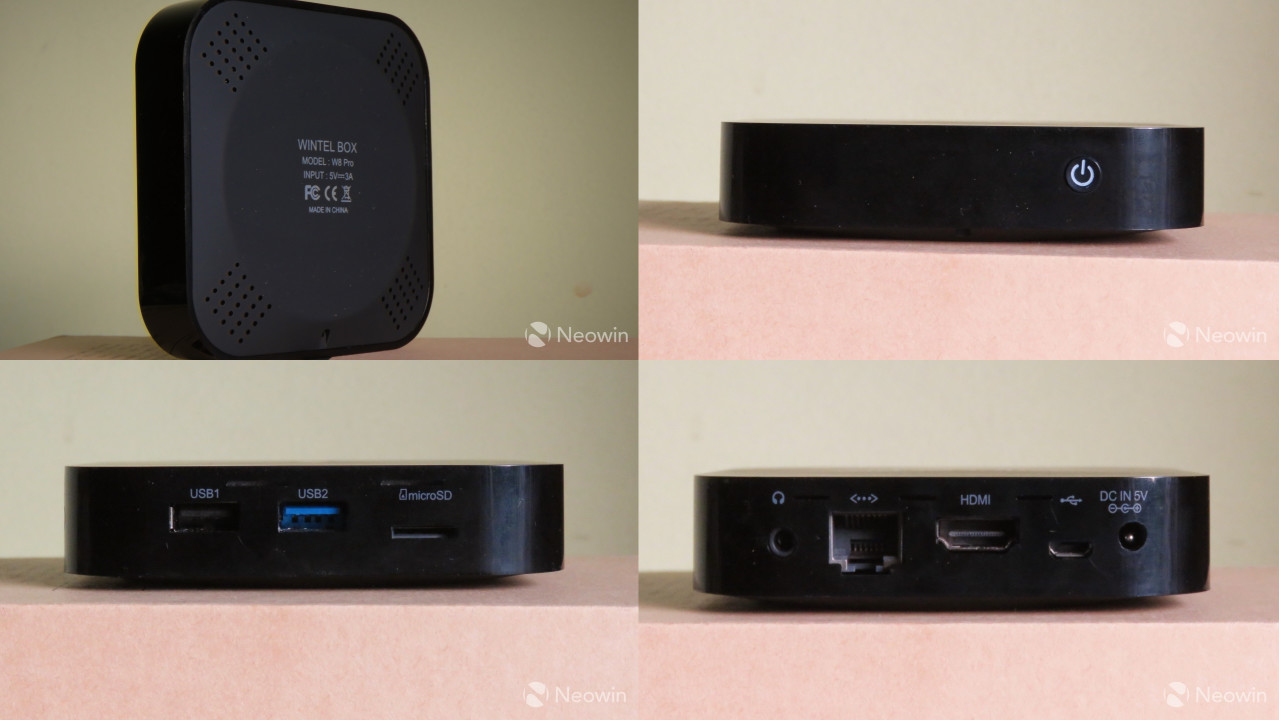 Three of its edges have buttons or ports while one edge is plain. On the front, there is the power button and LED, the left side features the two USB ports and the microSD card slot, while the rear holds the 3.5 mm jack, ethernet port, HDMI port, microUSB port and the power connector. The base of the device is slightly elevated and comes with four vents to keep it cool.

The high gloss finish on the sides of the device gets scratched very easily and picks up fingerprints as well, but that probably isn't a big issue as the device would likely be tucked away behind the television or other media boxes once it's set up. 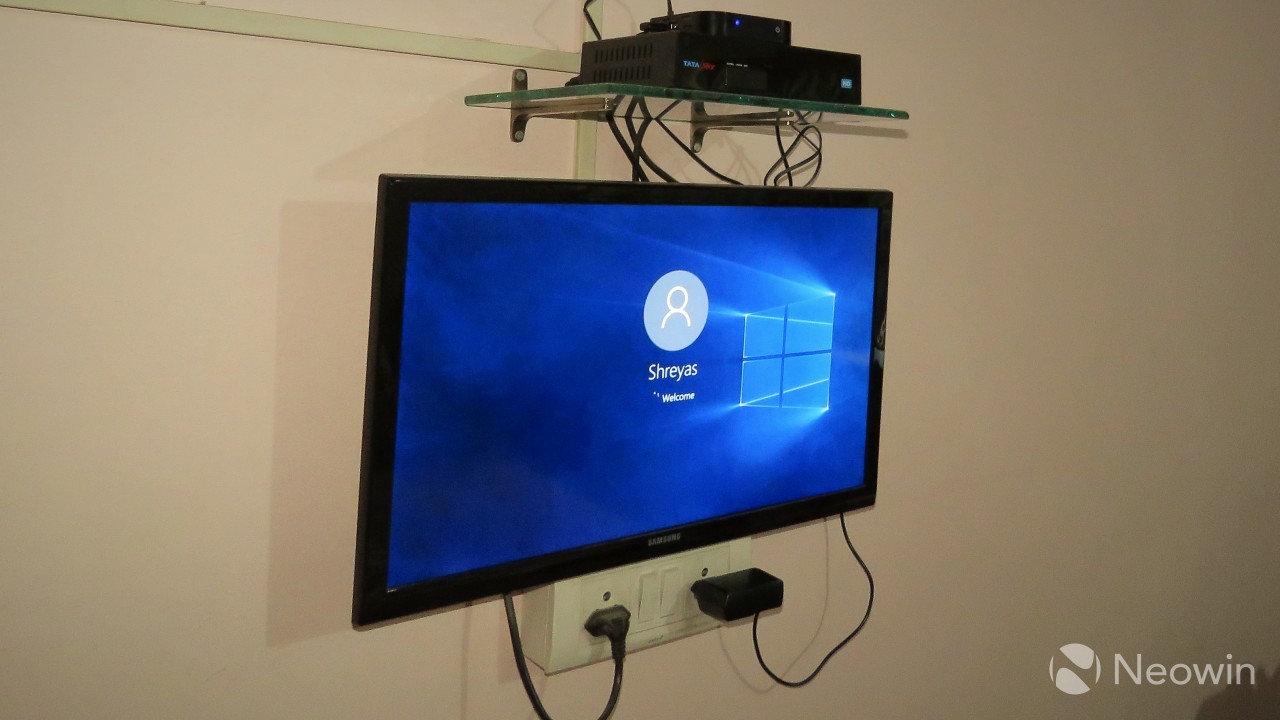 The Wintel Box has two variants, one with Windows 10 and the other with Android. We were provided with the Windows one, which came pre-loaded with dual-language (English, Simplified Chinese) Windows 10 Home build 1511 (also known as the November Update). However, the manufacturer hasn't provided an activated copy and the user is expected to purchase a license from the Windows Store separately ($119 for the Home Edition). Additionally, the packaging features the MS Office logo, but only the Modern version of the productivity suite, that does not support document editing without a valid Office 365 account, is bundled with the OS. Purchasing these two will leave you with a total bill more than the device's worth.

Starting things off, there were no noticeable issues with Windows 10 on the mini PC and a full blown version of the OS is always welcome due to the high availability of apps for consuming media. The out-of-the-box Windows experience was a standard affair, and since all the drivers were already installed, there was no inconvenience in getting things started. One thing that I felt could have opened up more possibilities was the inclusion of a microphone, as Cortana isn't very user-friendly without one and I hope a future version of the device comes with it. Interestingly, the product listing for the Wintel Pro includes a dedicated section for Cortana. 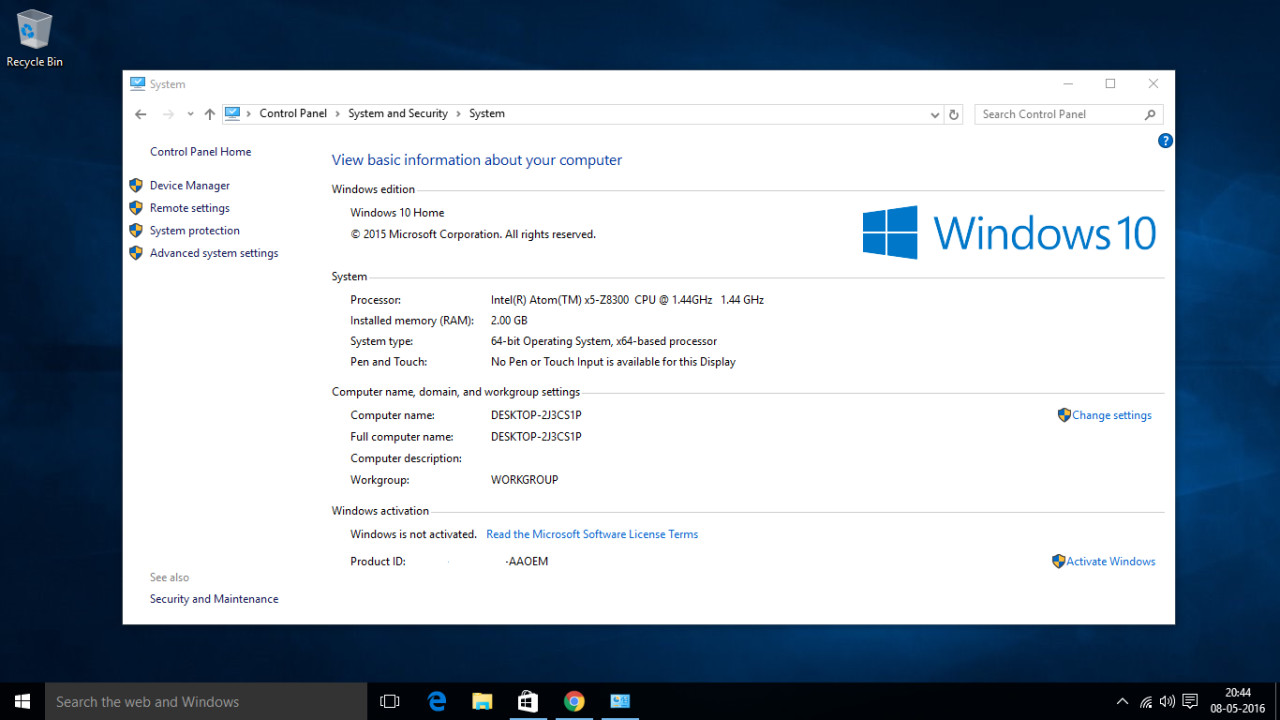 On paper, there isn't much to complain about the Wintel Box's hardware configuration, but its real world performance gave mixed results. I connected the device, first with my 42-inch LG TV which has 1080p resolution and later with a smaller 23-inch Samsung TV with 720p resolution. The device did a decent job in detecting and displaying content on both the screens with no noticeable lag.

However, the Wintel box struggled on the connectivity front due to its flaky Wi-Fi. For a device aimed at media consumption, this is definitely not acceptable. I often found the PC struggling to catch signal from the nearest Wi-Fi router/extender, and I ended up placing an extender next to the device to carry on with my review. For input, I used a Microsoft wireless keyboard and mouse combo, which worked fine for up to three meters beyond which the reception wasn't great. The network issue can be bypassed using an ethernet cable or an alternate WiFi dongle, but that's the most one can do as manufacturer support for the device is non-existent. 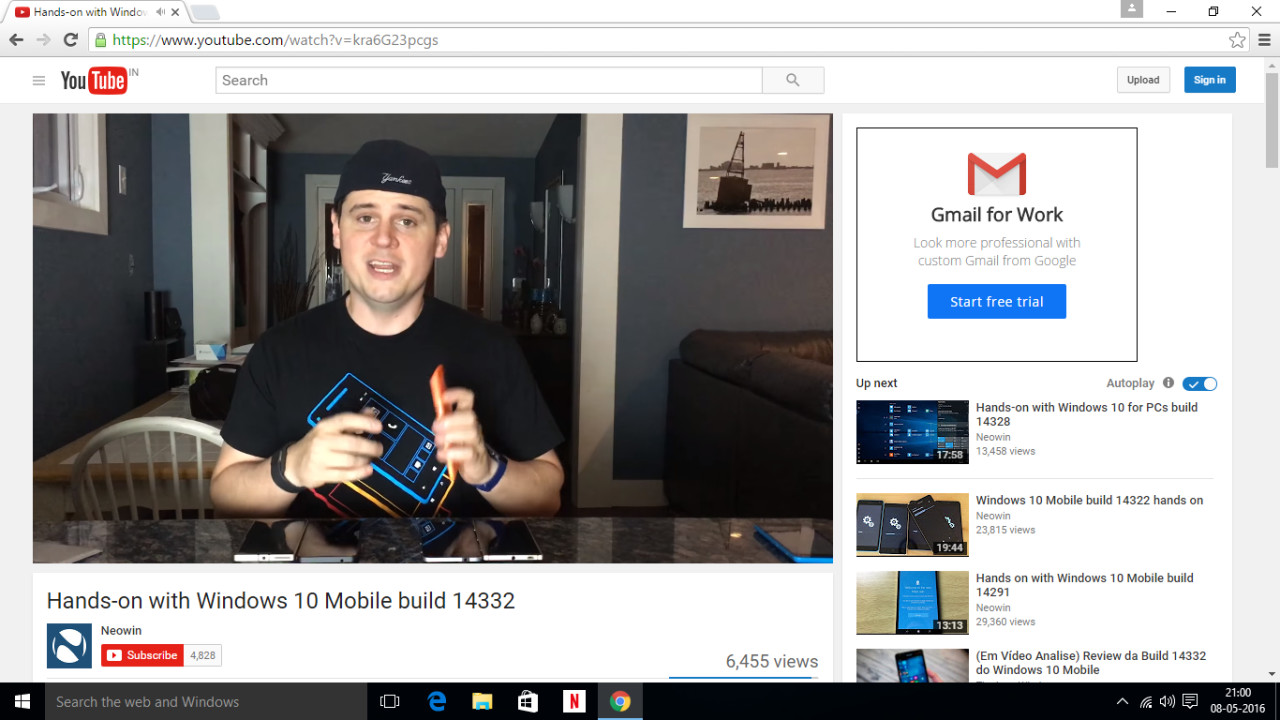 These issues aside, the media performance of the CX-W8 was really good no matter what the source was. Surfing the internet on the TV wasn't a very pleasant or natural experience for me although it was mostly limited to searching for YouTube videos or downloading VLC and Chrome.

Streaming YouTube videos on Chrome resulted in heavy RAM usage, due to which switching between tabs or opening other apps became sluggish over a period of time. Although the Intel Gen8 chip supports 4K resolution, the less amount of RAM could prove insufficient and result in a drop in frame rate on such high-res TVs.

Using the Netflix app, on the other hand, the streaming was smooth and the video quality adapted quite well with both the televisions. Windows Store games such as Candy Crush Saga and Crossy Road ran just fine, but those and other similar games are probably the only ones that the device will be able to handle due to its configuration.

The video performance using the default Movies & TV app, Windows Media Player and VLC was also consistent and had no issues, but the lack of a dedicated large screen UI made it difficult to navigate through the content from a distance as compared to the Netflix app which has a better UI by default.

Between switching from the larger TV to the smaller one, I decided to reset the PC to its factory configuration without a deep wipe, using the option in Windows 10. The process took a little over two hours to complete and often felt as if it was stuck. A similar reset on my fourth-gen Core i5 laptop completed in about 40 minutes.

The overall experience of using the Wintel box as a PC while connected to the TVs wasn't a very pleasing one. The on-screen items weren't fully visible beyond a certain distance. Using it with a standard monitor, on the other hand, shouldn't be too different than a regular desktop experience except for the low firepower.

As a desktop replacement, the device's lowly specifications can support normal work scenarios such as editing Office documents or surfing the web, but I wouldn't count on it for resource intensive tasks.

Adding a different interface similar to the Xbox Home or Windows Media Center could have improved things in case of big screens, but that's more of a Windows issue than the box. You can of course use a third-party home theater system such as Kodi, but out of the box you will still be treated to the standard Windows desktop UI.

The product itself is perfectly fine and I wouldn't mind keeping it hooked to my TV as a proper media hub, but there's a major problem with it that'd keep me from suggesting it to anyone even if they decide to get a valid Windows 10 license and aren't concerned about the WiFi issue. This problem is the complete lack of support that the user will be getting with the device.

If your hardware conks out after days or months of usage, there isn't a particular manufacturer you can approach to get the device fixed. There are numerous OEMs who are manufacturing the Wintel Pro box and there is no way to tell them apart. Also, the sellers do not provide any contact information of the OEM for support.

Within a certain period, the faulty item can be replaced from the online retailer but warranty or extended support is certainly not available for the device. The buyer will also need to accept that the device will not get any driver, firmware or BIOS updates for nagging issues.

The Wintel Pro CX-W8 could have been a really worthy media box if it came with a Windows 10 license at the same price that it is currently being sold. It is rather irresponsible of the company for not mentioning the license situation and including Windows 10 and Office logos even though it isn't providing them. A Windows 10 Home OEM license costs around $85 on Amazon and factoring in that price brings the total price of the box to $175. At this price, the system is barely a bargain. Instead customers can opt for an Intel NUC box ($127.99) or the Compute Stick with Windows 10 ($143.95), which are well supported by Intel.

As of now there aren't any guaranteed ways to install an alternate OS on the Wintel Box, in case you do not intend to purchase a Windows 10 license. Service and warranty will also be non-existent, and repairs will probably cost more than the actual device. Even if you still decide to purchase one, it would still have the major WiFi issue and users will certainly need to make a few adjustments to get the most out of the device.

The device does offer good media output and portability but it is a risky buy with respect to manufacturer support and reliability. Moreover, there are similar products such as the Tronsmart Ara X5 available for $150 or the $99 InFocus Kangaroo, which offer similar features, activated Windows 10 Home and at least have a proper website and support number in case something goes wrong.

Review unit was provided by Gearbest.com, you can purchase the CX-W8 from their website.