Cast your mind back just a few years, and the idea of apps on smartphones was quite different to how it is now. Since those days of buying expensive programs from third-party retailers on the web, the majority of us now get cheap and free applications through vast, efficient app stores, that allow us to easily browse for and install apps on our handsets.

The ease of developing apps for mobile platforms today, along with the streamlined process for consumers of being able to download them, continues to fuel the phenomenal growth in mobile software, with 2011 showing sizeable growth across all platform stores. Distimo, the leading app store analysts, have released statistics for the year through to the end of November 2011, so let’s take a look at some of the year’s highlights.

Unless otherwise stated, the data refers to app store performance in the United States only.

2011 was a year of huge growth in software across all platforms. Combined, the seven major app stores (in order, in the US: App Store for iPhone, Android Market, App Store for iPad, BlackBerry App World, Nokia Ovi Store, Windows Phone Marketplace and Amazon Appstore) now offer over one million apps.

With the exception of the App Store for iPhone, stores on all platforms at least doubled in size during the course of the year. The Windows Phone Marketplace far exceeded this, growing by more than 400% to over 35,000 apps in the US by the end of November (since then, the total number of apps has exceeded 45,000 globally).

The ‘freemium’ business model (of offering both free and paid-for versions of the same app, sometimes with different levels of functionality) became a major source of revenue for developers this year. Half of the revenue associated with the 200 top-grossing apps in the App Store for iPhone is now based on a freemium model; this is even higher in the Android Market (65%). We all love a free app or two (or three).

In terms of free apps alone, the Android Market is now the largest, with over 220,000 free downloads available, compared with fewer than 190,000 for the App Store for iPhone. The App Store for iPhone is by far the largest for games, with over 79,000 available, compared with 46,000 for Android Market and just under 29,000 for the App Store for iPad. The Windows Phone Marketplace is now the fourth largest store for games, having passed both the Ovi Store and App World, while Amazon’s Appstore has also passed its Nokia and BlackBerry counterparts to the number five spot.

Despite Android’s fast-growing market share, its app store revenue is still far behind that of the two Apple stores. The App Store for iPad generates more than double the revenue of the Android Market; the iPhone store more than four times that of Android. Indeed, Apple’s App Store as a whole remains by far the largest by revenue and in terms of apps. Curiously, though, the number of downloads in the App Store for iPhone remained in constant decline for the first nine months of the year.

It was only after the new iPhone 4S was released that the number of downloads began to increase again, and by the end of November, the number of apps downloaded from the App Store reached its highest point of the entire year.

Distimo looked at the apps that generated the most downloads around the globe, and across all app stores, and collated data relating to free and paid-for apps on each platform in order to compile a list of the most downloaded apps of the year.

Available in all app stores except for BlackBerry App World, the application that generated the most downloads in 2011 was none other than Angry Birds.

A worthy winner? Have your say in the comments below. For now, here's the full top-ten list: 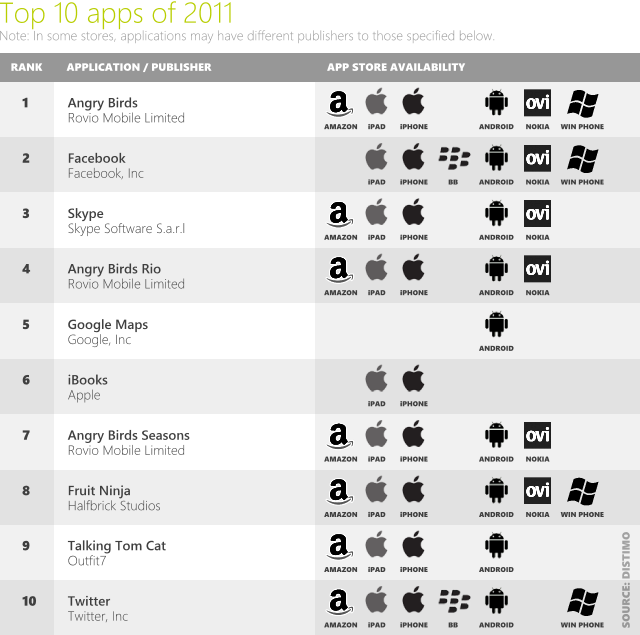