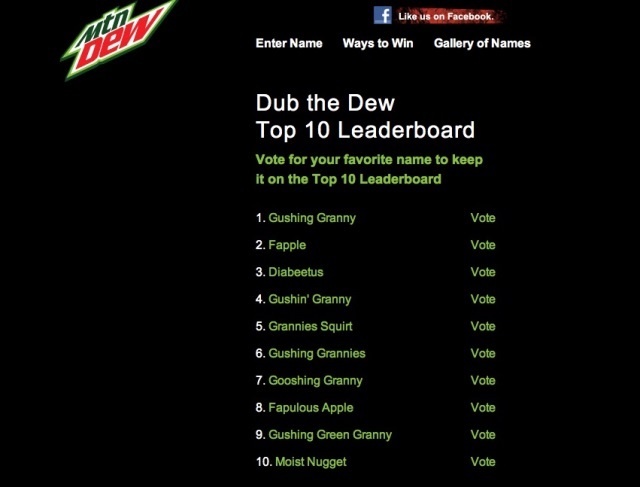 Grannies appear to be the popular choice.

4chan has shown us over the years that whenever they put their vast resources together, the site has the power to completely turn around an innocent marketing campaign, or even track down baddies like the infamous Burger King Lettuce stomper that was posted last month in our forums.

Now, the site has joined together to troll a Pepsi Co. online campaign called "Dub the Dew" which asks voters to come up with a new name for their Green Apple Mountain Dew flavored drink. Tons of silly suggestions started topping the leaderboard, with variations of Gushing Granny being favored by the 4Chan'ers. Other suggestions for the new name included "Diabeetus", "Moist Nugget" and "Fapple".

We beg to differ.

At one point "Hitler did nothing wrong"  topped the leaderboard, and it was going to be obvious that the campaign would be abandoned as yet another fail for a seemingly innocent "involve the peoples" gesture by a multinational company. You may remember the McDonalds campaign that also horribly backfired, back in January.

Eventually the campaign was taken offline, and someone even created a mirror for it which didn't allow votes, but that is now down though at the time of writing.

The Hypervocal website has even received updates that denied 4Chan was involved, and blamed it on Reddit, who subsequently offered proof that it wasn't them. Whoever is to blame, it seems that Pepsi will have to pick a name outside the top ten, come up with the name themselves, or orchestrate a new campaign that isn't as easily foiled.

Seems even the big boys can't catch a break!

Thanks for the news tip Ryoken!