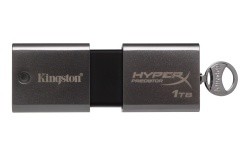 Remember how cool it was when you learned you could own a Flash drive with 1 GB of storage? Today, as part of its CES 2013 announcements, Kingston Digital revealed the new upper limit on portable Flash drives.

Kingston's press release announces the new DataTraveler HyperX Predator 3.0, a Flash drive that will have versions with up to 1 TB of Flash storage. While you can get a version of this drive with "just" 512 GB of storage right now, you will have to wait until later in the first quarter of 2013 to get the mega-cool 1 TB version.

And what about the price? Well, Kingston has not revealed what the 1 TB version of the drive will cost but the 512 GB version that's out now is priced at a staggering $1,750. Ouch.