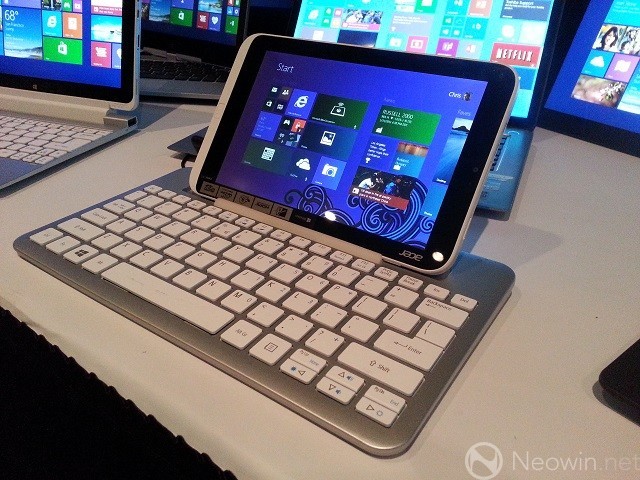 We got a chance to see the Acer Iconia W3 in action at TechEd in New Orleans last week, and now you can go ahead and order one of your own, assuming you have the cash.

Amazon.com and Staples.com both have pre-order listings for the first 8-inch Windows 8 tablet, for the price of $379.99. While Amazon shows shipments for orders put in now won't start for between three to four weeks, Staples.com shows a much shorter shipment time, claiming that they will start going out on June 15th.

Just a reminder: the Acer Iconia W3 has an Intel Atom Z2760 Clover Trail processor inside with a clock speed of 1.5 GHz, with Intel Burst Technology that speeds jumps up to 1.8 GHz. The 8-inch touchscreen has a resolution of 1280x800 display, two GB of RAM and 32 GB of onboard storage, with a microSD card slot for more storage needs. It also has both front and rear two megapixel cameras. Acer claims the battery life will last up to eight hours.

Amazon.com also has a version of the tablet with 64 GB of storage that it is selling for $429.99. All of the versions of the tablets come with a free version of Microsoft Office Home and Student 2013. The pre-order listings don't show a way to order the optional keyboard for the Iconia W3.

Source: Amazon.com and Staples.com via WPCentral.com