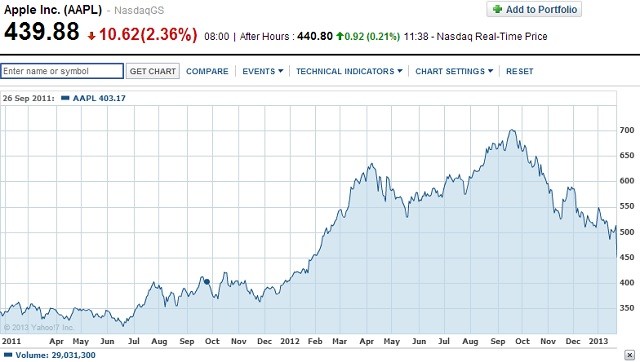 The stock value of Apple has continued sliding these past few days following lackluster financials for Q4 2012, with the tech giant losing the "most valuable company" title to Exxon Mobil today. Way back in August 2011, Apple took the crown from Exxon briefly, before cementing the position in the following days and months; they even reached a record share price of $700 in September 2012.

Now the share price for Apple sits at just $439.88 after falling 2.36% in the day's trading, bringing the market capitalization down to $413.04 billion. Meanwhile, Exxon Mobil's relatively steady stock price rose today to $91.73, bringing their market cap to $418.23 billion, higher than Apple's for the first time in years. Due to this change, Exxon Mobil now steals the crown of the most valuable company back from Apple.

Apple's stock price is now at the lowest value since January 24, 2012, effectively wiping away all the gains they had made for 2012. With increasing market competition and innovation, especially from the likes of Android and Samsung's Galaxy range, Apple is losing the edge they once held.