We're fast approaching the retail launch of Microsoft Office 2013, with many rumors pointing to a January 29th release. Today we can confirm that January 29th is indeed the date for release, as Australian sources have pointed to a local release on January 30th - due to the time zone difference between Australia and the United States, Australians usually see a release one day later, making a North American release on the 29th essentially a certainty. 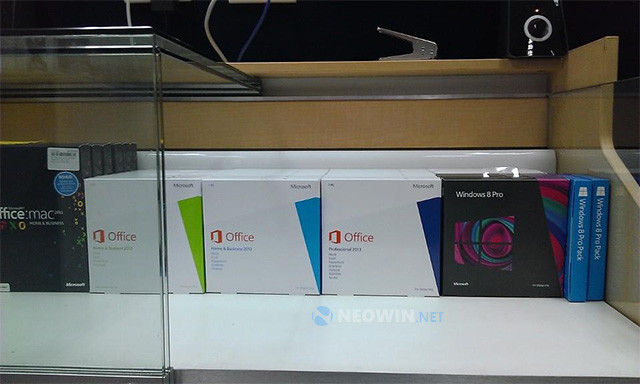 Not only this, but we've also got a glimpse of the final retail packaging in the wild, sitting on a shelf alongside Windows 8 and Office 2011 for Mac. The retail packaging is slightly different to the rendered boxart we saw before through an online retailer, but as these are the actual retail boxes as seen in the wild, we have no doubts this is what we'll be seeing come January 29th. Our source also says that in-store displays for Office 2013 will be put up around January 28th for the launch a couple of days later.

We also have a range of local pricing information available for the Australian release, which we've outlined below. The dealer pricing (what the store purchases Office for, excluding tax) corresponds to just under the expected United States retail pricing, while for some reason the Australian regular retail price is a huge premium over what the actual cost is. We have confirmed that the RRP is across the board for all Australian stores, so it goes to show the difference international buyers are paying.

With all info now practically confirmed, we just have to wait for Microsoft to officially announce the retail release date.

Update: We've confirmed the RRP for Australian stores (in the table above) is not just for one store, but for all of them. You can see how much Australians are going to get ripped off by compared to the dealer cost and United States pricing.