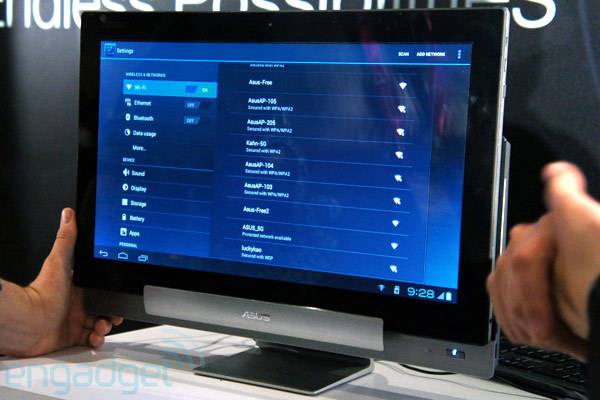 Booting two operating systems inside one PC is usually something just for the knowledgeable PC user. Today, as part of its Computex 2012 announcements, Asus revealed plans to release the Transfomer AiO. This will be an all-in-one PC that will have the ability to easily dual boot both Windows 8 and Google's Android OS.

Engadget got a chance to check out the Transformer AiO at Asus' press event. It has an 18.4-inch display that can be used as a normal all-in-one desktop. However, the display can also detach from its keyboard and be used as a really big 18.4 inch Windows 8/Android tablet, if that floats your boat. The display supports 10 finger multitouch and has a LED-backlit display as well.

The article claims that the Transformer AiO boots up to Windows 8 first and then can switch over to running Android with the push of a button. Unfortunately, Asus isn't revealing anything else about this product, including what processor it has inside or its memory and storage capabilities. There's also no word on its price or availability, although we suspect it won't be coming out until sometime around Windows 8's own commercial launch later in 2012. However, this certainly looks like an interesting variation in the growing all-in-one PC trend.