In February, Google announced that it was in discussions to bring its 1 Gbps Google Fiber Internet service to nine more U.S. metropolitan areas. Not to be outdone, AT&T announced today it is thinking about bringing the same Internet speeds to 21 U.S. metro areas. 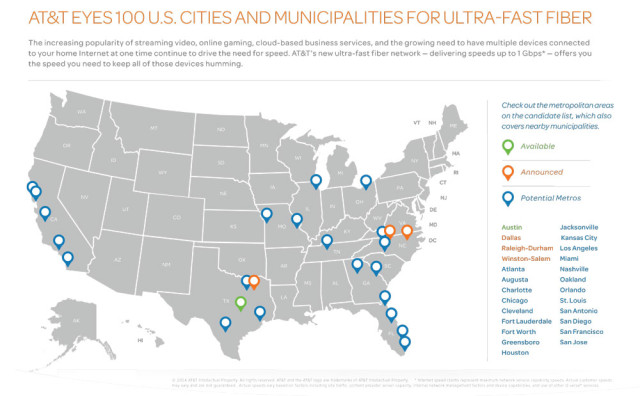 AT&T's GigaPower service is currently live in a small section of Austin, Texas, and will expand to Dallas, Raleigh-Durham and Winston-Salem, North Carolina at some point. Today's press release doesn't mean that AT&T will add 1 Gbps Internet to all of the cities listed; it simply means the company will "work with local leaders in these markets to discuss ways to bring the service to their communities." Pricing has yet to be revealed.

Google Fiber's 1 Gbps ISP, which also includes a television service, is already live in Kansas City and will go live in Provo, Utah and Austin, Texas later this year.