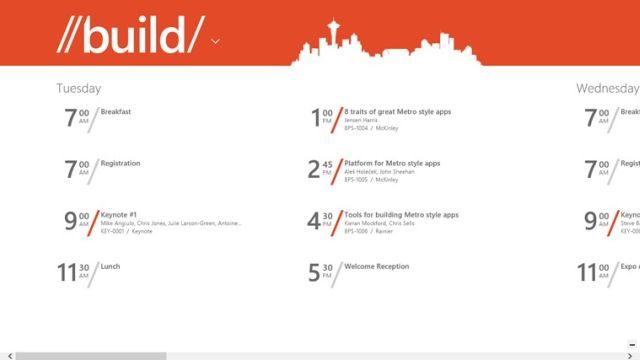 Today is the final day of Microsoft's BUILD 2012 developers conference. The last sessions are being held and later this afternoon that will be all she wrote for the company's big event at its Redmond, Washington campus.

While today is the last day, Microsoft has decided to go ahead and launch the BUILD 2012 app for Windows 8. It's now available for download in the Windows Store. Yes, it does seem a bit late to release an app for an event that is just a few hours away from closing. Perhaps there were some issues with certification.

In any case, this free app is still worth downloading if you are interested in programming for Windows 8 and Windows Phone 8.  It already allows access to videos of many of the BUILD 2012 sessions and more will be added in the coming days. The end result is that you will be able to check out all of the BUILD 2012 panels from the comfort of your own home, but without being able to get the cool freebies or attend the parties.

Hopefully for BUILD 2013, Microsoft will release its official app well in advance of its start date, whenever that may be.