It’s no surprise that the use of DVRs is increasing as more and more people become used to time-shifting instead of watching television on the networks’ schedule. DVRs are compared to competitors so that customers can find the best fit for their lives. Now the New York Times is reporting something that may surprise many people: Your set-top boxes consume more energy in a year than your refrigerator. 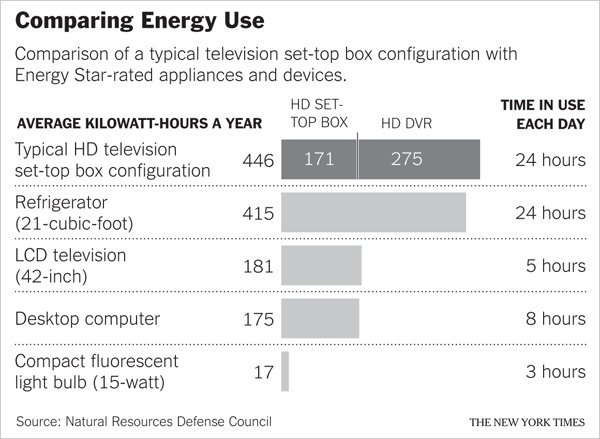 Initially you might assume that the main culprit is the hard drive spinning in the device, but according to the article, it only accounts for an additional 104 kilowatt-hours a year; a normal HD set-top box generates 171 kilowatt-hours a year compared to 275 kilowatt-hours a year for an HD DVR. The problem is that the electronics run 24x7, even when not being used by the customer. Some of this is related to the fact that providers push software updates in the middle of the night, while another issue is that customers expect their television to be “instant-on.” One of the biggest complaints about HD DVD and Blu-Ray way the fact that it took minutes for the machines to boot up, so having to wait for your set-top box to boot up each time would not be acceptable to most people.

Another issue with a DVR is that it needs to be running so that it knows when to start recording your television shows. Some DVRs, such as TiVo, will even record shows that it thinks you might like based on your previous viewing habits. Although a DVR could be made to spin down the drive and underclock the processor when not in use, a big chunk of power will still be consumed.

Although the article is a little misleading in that it shows two electronic devices taking up more power than a single appliance, with families having multiple set top boxes and DVRs in their house, it is a real concern.