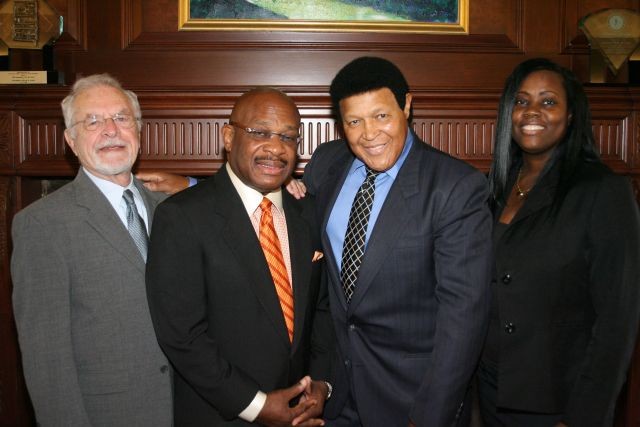 In the beginnings of the rock and roll era in pop music, Chubby Checker gained fame and fortune for singing The Twist in 1960. Now the singer is looking to get some money from another source - and this time, it's for a smartphone app that bears his stage name, but which is no longer available.

In a press release this week, it was revealed that Checker, whose real name is Ernest Evans, has filed a lawsuit against HP and its Palm subsidiary. Evans and his attorney Willie Gary claim that HP maintains an app made for the Palm smartphones called "Chubby Checker" that was not authorized by the singer.

While the press release does not go into details on what the "Chubby Checker" app is all about, webOS Nation said that the program, created by developer Magic Apps, was a way to find out the size of a dude's trouser snake by typing in his shoe size.

We say "was" because the app is no longer available for download from the webOS App Catalog. In fact, the 99 cent app was downloaded a grand total of 84 times before it was pulled in September 2012. However, the lawsuit claims HP "refused to dismantle the operation". It adds:

The "app" adversely affects Chubby Checker's brand and value and if allowed to continue, will cause serious damage to the Plaintiff's goodwill and will tarnish his image that he has worked to maintain over the last 50 years.

The kicker? Evans seems to believe HP owes him a whopping $500 million for the damage that this app that 84 people downloaded has done to him. Aside from the fact that the app is no longer available, we can't help but wonder why Evans doesn't file a lawsuit against Magic Apps instead of HP.