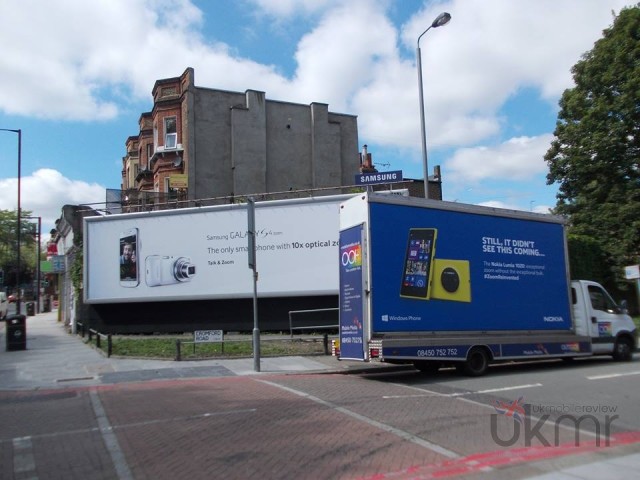 Most marketing campaigns are pretty dull, but in some sections of the UK the folks at Nokia decided to have some fun, at Samsung's expense, to help promote the 41 megapixel Lumia 1020. It's a a very humorous way to get some attention for the Windows Phone 8 smartphone, which has yet to be released in the UK.

The UKMobilereview site has posted images from one of its readers that shows three unnamed street corners with the same standing billboard. The signs currently are the home to an ad for Samsung's Galaxy S4 Zoom camera-smartphone. The billboards touts the 10x optical zoom for the Android device.

Over the weekend, Nokia moved billboard trucks right next to the Galaxy S4 Zoom signs with a message that said "Still, it didn't see this coming ...". Of course, it was meant to show that the 41 megapixel camera on board the Lumia 1020 is supposed to offer a better way to zoom on images rather than using the optical zoom with the Galaxy S4 Zoom.

All in all, Nokia's move to upstage Samsung at UK street corners shows that the company is both serious in getting the word out on its product while also offering people who go by those billboards a little bit of a smile