Advertising on Facebook should be one of the most profitable approaches possible, due to the massive amount of traffic the service gets. With some initiatives, such as Sponsored Stories, it could even convince more internet-aware users to check out advertised services. Yet Facebook might not be as clear-cut with the companies sharing these ads. Limited Run claims – it is worth pointing out it is merely a claim at present – that Facebook was attempting to exploit them.

Limited Run is a company focusing on selling products to fans. They're ideal for celebrities or those with significant online personae, and their focus is on offering a system for building an online store to sell your wares from. When the service was preparing to relaunch, it began experimenting with advertising on the world's biggest social network, but reportedly found some peculiar things.

Facebook was charging for advert clicks, but they could only verify around 20% of the clicks even reaching their site, and began to doubt their analytics company. Deciding to see what could happen, they changed analytic companies. Even then they could not verify more than 20% of their received clicks. Now they were suspicious, and did what any developer would do in a situation like this: they built their own analytic system.

Their findings are not too pleasant. For about 80% of the clicks they received, JavaScript wasn't enabled. That makes it hard for an analytics company to verify the click. According to the company, 80% of people without JavaScript is extremely odd. That figure should be 2% at most. With curiosities piqued the company went ahead and built a page logger, to count the number of times the page was loaded. That 80% of clicks? All bots. Facebook was charging for clicks to a site that wasn't being visited by more than a fifth of people clicking.

It gets better, the company needed to change its name. Previously they were known as Limited Pressing, but they changed their name to Limited Run. They contacted Facebook to see about changing their name, and they could on one minor condition. Spend more than $2000 on advertising monthly. The team don't like this, and are severing their Facebook ties from here on. Even now, their Facebook page is identified as Limited Pressing. 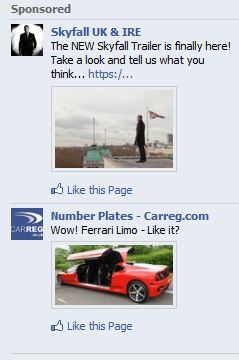 How much legitimate traffic could ads like these be getting?

Their status has more than 3000 likes at the current time, and more than 300 comments. Some of the comments are praising the group for their decision, and some are asking them to release the data and prove their claim. It certainly would be nice to see the data alongside, for it would validate their claim. If it turns out Limited Run are right and Facebook is swindling advertisers, then the company could be punished for this. When you're an industry leader, all eyes are on you. Something like this happening is only going to focus the attention of those eyes further. People who have always said they doubted Facebook and its practices now just have more fuel for their fire.

We can't say for sure whether it's a coincidence or not but the sheer volume of users without JavaScript is certainly irregular. Without more evidence to pull in either direction than just a status, we can't say for sure that the service is screwing its enterprise users. If there was conclusive evidence then it could be extremely bad news for the company, whose stocks have reached a new lowest-ever mark.