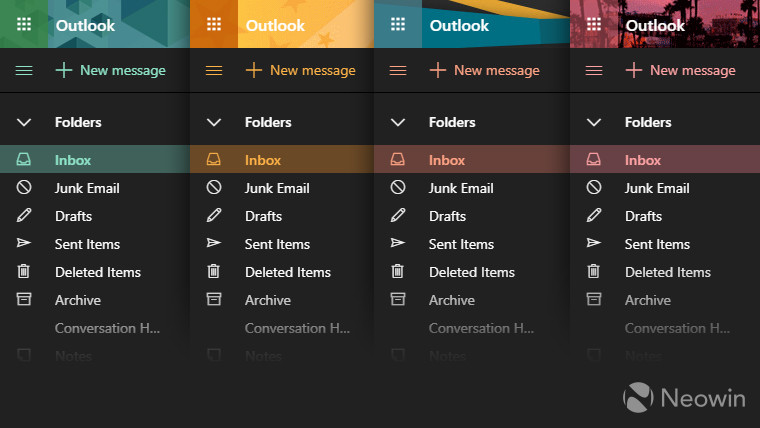 Back in August of 2017, Microsoft announced that its Outlook.com email service would get a fresh coat of paint, as it kicked off the beta for the new UI. The beta concluded last year, and a couple of months ago, Microsoft stated that the new experience was ready to roll out to everyone. However, Dark mode, one of the more interesting components of this release, was still incomplete.

For the entirety of its existence, Outlook.com's nighttime-friendly mode sported a disclaimer that some themes were simply unavailable to use if you chose the dark gray variant over the default light one. The "some" really meant that all options but the default shade of blue were unavailable to use, a decidedly Henry Ford approach to customization.

This seems to have been rectified, as Dark mode now allows you to choose from the same selection of themes as Light mode - including the recently released rainbow-inspired ones. The caveat however is that this experience doesn't seem to be available to everyone, and it's unclear currently how Microsoft plans to approach this rollout. We have reached out to the company for further clarification.

Do you like Outlook.com's Dark mode? What's your take on the colour options? Sound off in the comments below.

Update: The rollout of Dark mode themes will be in accordance to the timeline outlined in this support article.