We’ll admit it right here and now: the current way Windows 7 manages more than one monitor attached to your computer is quite lacklustre, and so far there have been few rumours surrounding what will be happening in Windows 8. So until then, we’ve grabbed three of the best multi-display-enhancing softwares and chucked them head-to-head. 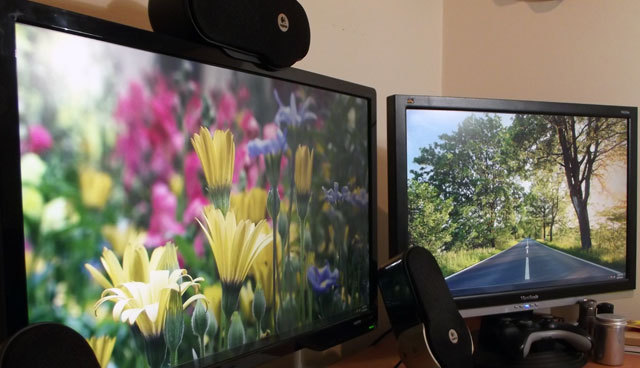 Anyone who has more than one display will know how Windows 7 currently handles it: you basically get some more pixel space to play with, you can stretch your wallpaper across both monitors and you can do some basic snapping – but really there is nothing that makes your other displays more easy to use. In our test lab today, we have DisplayFusion, UltraMon and Actual Multiple Monitors, all of which purport to do the job better thanks to solid feature sets.

Below, we split our comparison into some of the areas that will enhance using and having those extra monitors attached to your computer. We tested each of the software on our Windows 7 x64 machine with two (24” 1920x1080 + 22” 1680x1050) monitors attached, removing all multi-display managers before testing the next one.

Windows by default completely fails to extend the taskbar onto any other monitors, leaving you with a rather blank bit of space. All three of our test software include a taskbar extension, and it’s surprising just how much easier it makes using secondary displays.

With the extended taskbar, application windows that are currently open in the secondary display appear in that display’s taskbar and disappear from the main taskbar on your primary monitor. This makes managing your open applications and windows on your second monitor a heck of a lot easier than default, and while it takes some getting used to, it definitely is better in the long run.

Now, you can’t just copy the Windows taskbar and paste it into the second monitor, each company here actually had to replicate the Windows taskbar experience as best as they could in the secondary displays. UltraMon includes just your basic extension: you get Aero-like application icons in the taskbar, but without any notification area, Windows 7 features or second start button.

DisplayFusion improves on this by giving you a second start button, time/date area, show desktop button and window previews for the applications that are open in the second window. However, here is where Actual Multiple Monitors really shines; they have effectively exactly recreated the Windows taskbar, with proper application pinning, previews, start menu, notification area, jumplists and other cool Windows 7 advanced features.

UltraMon is good if you want the basic experience without any second start menus, but Actual Multiple Monitors really does the extended taskbar well to the point of having everything pretty much identical. If this is what you want your multi-display software to do, look no further.

Having a dual-screen or triple-screen wallpaper is certainly a cool effect to have, but Windows doesn’t really take this ability very far. Sure, you can do it, but the software we tested offers a lot more features than your standard Windows 7 way.

When testing our software suite there was a clear standout: DisplayFusion. Why? Because their wallpaper and theme management features carry the best configuration options out of any of the other software. You can choose to span an image across both monitors like Windows 7 can do, or you can choose separate wallpapers for each monitor. You can then randomize the wallpapers on each display, choose exact image positioning, scaling and more. 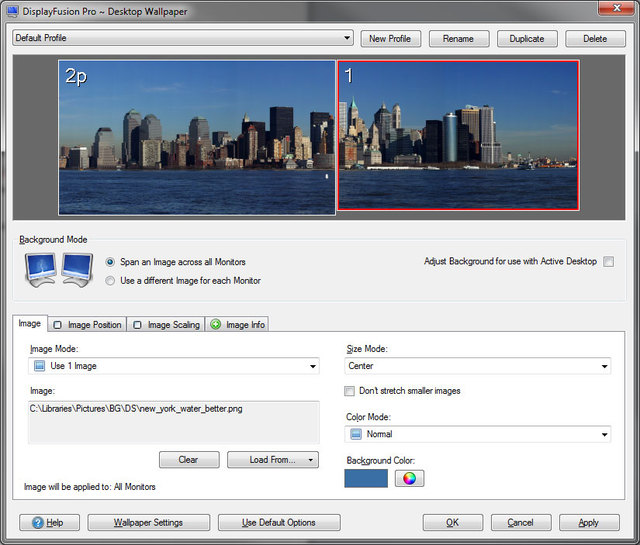 Furthermore, DisplayFusion easily allows you to change the logon wallpaper as well, and was the least buggy when it came to wallpaper management; we had issues with Actual Multiple Monitors not remembering our dual-display randomization settings and UltraMon doesn’t come with a feature to randomize each wallpaper separately which we think is a great feature to have.

We’ll also mention here that all three pieces of software successfully managed screensavers, including displaying the one screensaver over all monitors, which with Ribbons screensaver looks quite awesome.

To make it even better, if you desire none of the other features of DisplayFusion such as the extended taskbar, the wallpaper management part of the software is completely free of charge, which is awesome considering it’s the best at it.

Dragging is a very easy method of moving your windows between monitors, but there is an easier way: hotkeys and buttons, and all three pieces of software we tested had this capability. Most featured by default two buttons – one that moves the window to the other monitor, and one that maximizes the window across all monitors.

We found this section quite hard to determine a clear winner in. UltraMon only offers two buttons maximum; however, their implementation was the most aesthetically pleasing, least buggy and most compatible of the lot. Actual Multiple Monitors expands on the two buttons by offering a third button that mirrors a window to the second display (we never found much use for this). DisplayFusion allows for custom buttons in the titlebar, however their implementation was the most buggy out of all of them.

When it comes to hotkeys, all the software did it pretty much exactly the same way, no gripes and no major differences at all, except that with DisplayFusion you could use one of your custom hotkeys as a titlebar button, and the UltraMon doesn't support custom hotkeys. For this section, we at first were leaning to UltraMon for providing the most stable button implementation but we eventually warmed to using four custom titlebar buttons provided by DisplayFusion.

Infrequently, you will need to mirror your primary display onto your secondary display, and this is something that Windows and (possibly) your graphics card driver can do without the need of any third party software. However, we discovered that two of our third party software choices have more options when it comes to this.

While UltraMon currently has no options to mirror displays (not overly important) We've been told that UltraMon actually does support mirroring (somehow we missed it), and both DisplayFusion and Actual Multiple Monitors have the ability to mirror the entire desktop, part of the desktop and area around the mouse. Mutliple Monitors takes it just a bit further with the titlebar button that allows you to mirror a single application easily to your second display, and there are a lot of customization options surrounding this.

Again, you probably will rather be using your second monitor as an extension of the first with an extended taskbar, but in the off-chance that you do want to mirror your displays, Actual Multiple Monitors does the better job

We’ll do a shout-out to UltraMon here, in that with their software you can actually perfectly adjust your second display’s placement relative to your first, meaning that if your monitors aren’t the exact same height, you can compensate for this down to the pixel, which is an awesome feature if, like with our test system, the two monitors you are using are not identical. 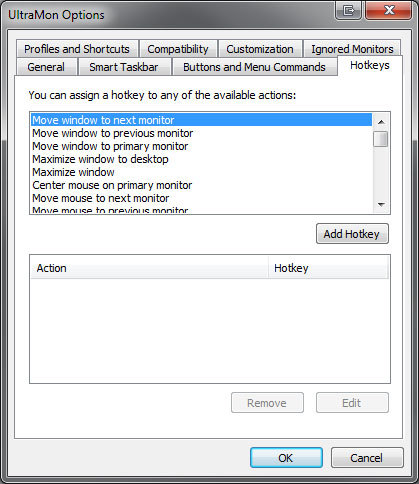 UltraMon also allows for custom display settings for applications, meaning that if their software is interfering in any way with other pieces of software, you can simply fix it by disabling certain features for that piece of software. UltraMon was also the most compatible of all three and had the fewest bugs we could find (although all three had low bug counts).

All these programs do offer a large amount of features and settings, so the way in which you can change those and the layout of the interface is going to be important. 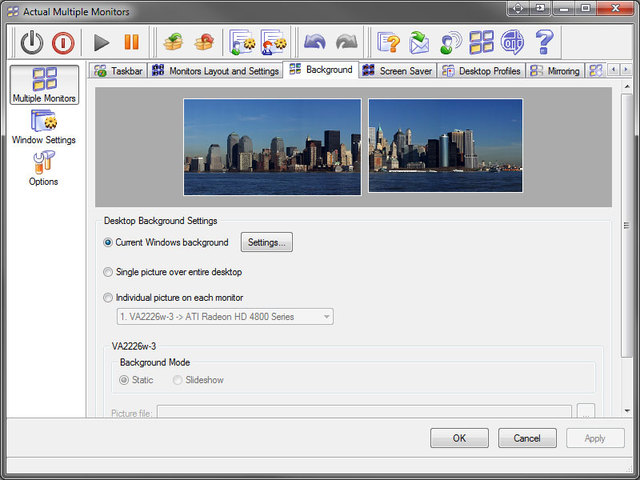 UltraMon uses a properties-like window in which it is easy to find relevant sections, but at times it can be hard to find specific sections. Actual Multiple Monitors uses a somewhat dated interface with somewhat useless top-row buttons. DisplayFusion uses a sidebar system that seems to work well, but some other features such as wallpapers are hidden away in the notification icon context menu.

To be honest, all applications need work in terms of their setting layout and ease of setup/use. However, DisplayFusion requires the least amount of work to get the best interface to use.

Unfortunately, at this stage we have to discount UltraMon from the race. Coming in at US$40, it simply does not have a feature set that is as robust as the other pieces of software. The taskbar extension is good, but not as great as Actual Multiple Monitors, and does allow some specific fine tuning while keeping relatively bug-free. However, it’s just not enough to justify the $40 asking price.

We ended up having a hard time choosing between Actual Multiple Monitors and DisplayFusion, coming in at US$40 and US$25 respectively. DisplayFusion has awesome wallpaper configurations (also for free), has great titlebar button support and also comes in $15 cheaper. Actual Multiple Monitors has a simply outstanding extended taskbar that is unrivalled by any of the other software we tested.

Is the taskbar alone worth the extra $15? Probably not, but you don’t just get the taskbar. You also get good wallpaper management, titlebar buttons, stellar display mirroring and essentially all the features the other software has (save for a few) and a little bit more. If you can fork out the extra $15 to manage your dual displays, you won’t be disappointed; if $25 is all you can manage, then DisplayFusion is still a very good piece of software.

Overall verdict: Actual Multiple Monitors, and it was a close call.