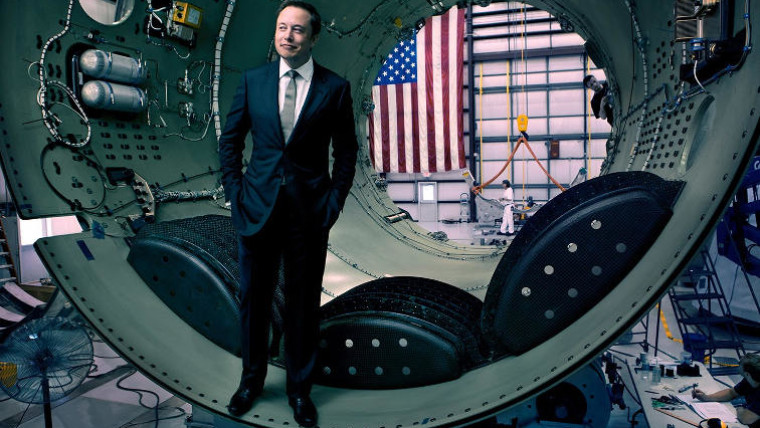 In a series of tweets over the weekend, Elon Musk made some pretty mad statements and promises related to two of his companies and famous projects; SpaceX's Falcon Heavy launch and The Boring Company.

According to the CEO, SpaceX's Falcon Heavy will finally blast off next month. This is big enough news alone, and updates us on previous reports that it would have taken off this year. However, Musk added the small caveat that the payload would be his own midnight cherry coloured Tesla Roadster. The Roadster is Tesla's first model, not the upcoming Roadster model that was unveiled along with the Tesla Semi. Apparently, when this car is blasted into space, its speakers will be playing nothing other than David Bowie's Space Oddity.

Payload will be my midnight cherry Tesla Roadster playing Space Oddity. Destination is Mars orbit. Will be in deep space for a billion years or so if it doesn’t blow up on ascent.

Musk has a tendency to make outlandish promises and claims, like betting that the world's largest battery would be installed by Tesla in South Australia within 100 days or Musk would personally pay for it. A goal which the company met and the battery is now helping keep some Australians cool over the summer. However, you would believe the above statement about the car to be a joke. But he hasn't retracted the statement, he has only added to it, he has also reconfirmed it to a journalist from SyFy Wire.

If the Falcon Heavy does actually blast Musk's own Roadster into space while playing David Bowie and all three of its boosters land successfully back on Earth, this would attract many people's attention and prove some of the Falcon Heavy's lift capabilities. But ultimately many people will be gobsmacked, maybe some credence should be given to how insane and awesome that would be.

The David-Bowie-playing-space-car tweets were followed by a number of other tweets concerning the Boring Company and its highly successful hat selling efforts. The Boring Company was apparently born out of the CEO's frustration with traffic. Many people have tried screaming swear words and begun offering all sorts of things to different deities while trapped in their vehicle stationary in traffic, Musk decided that he would design an electric sled and tunnel system to resolve the issue instead. In order to defeat traffic in this way he would need to make the worlds fastest tunneling machine, faster than a snail, and as the story goes, this is how The Boring Company came to be.

To promote and raise funds for The Boring Company it started selling plain black baseball caps that started at $20. The Boring hats have been very successful and thousands have been sold. Musk's latest tweets highlight that every 5000th purchaser of a Boring Company hat will have it signed by the delivery guy and receive it for free. The baseball caps have also been capped, there will be no more than 50,000 of them. But, amazingly, the signing of every 5000th cap will take place in one of the Boring Company's LA tunnels while the hat buyer wears a blindfold and "drives" the tunneling machine.

This element was added by him as a comment to the tweet below a few hours ago. Again we cannot be sure if this will actually take place but perhaps, following the bet he made regarding the world's biggest battery and the details of the Falcon Heavy launch, there are few things that the CEO is actually joking about.

Every 5000th buyer of our boringly boring hat will get a free hat signed by the delivery guy https://t.co/11TYEUSG4M

Blasting cars off into space, coming up with ideas that push the imagination, and allowing a lucky winner to have a "golden ticket" to see one of his bizarre, potentially world-changing projects? For this reason, whether you are a fan or a critic, when talking about Musk and his projects it is hard not draw parallels with the fictional candy making tycoon Willy Wonka.