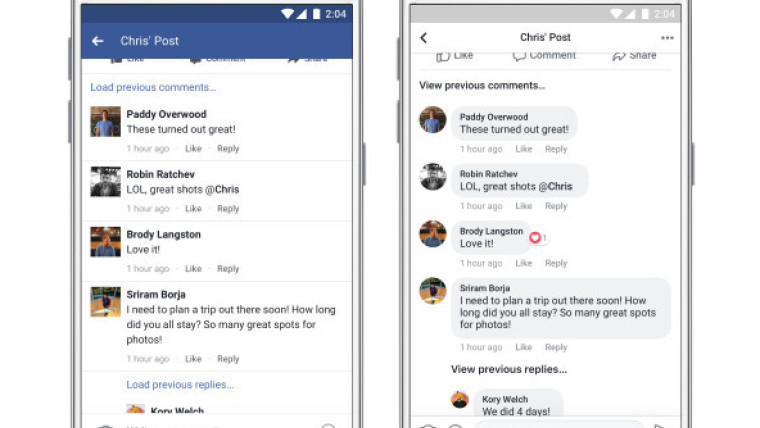 Facebook is set to make design changes to the News Feed in the coming weeks to make it feel more conversational, easier to read, and easier to navigate. A preliminary glance and the new overhaul shows that the News Feed has become much more readable now that it uses chat bubbles to define comments and subtly uses colour to highlight links to articles.

“Every person's News Feed is different and populated with a unique set of stories – from photos and videos to GIFs and links. And with so many types of stories available, each feed is more complex than ever. In order to make New Feed more conversational and easier to read and navigate, we'll be making a few updates to its design over the coming weeks.”

The most striking update to the News Feed is the comments section, to help users read comments, each appears in its own bubble giving colour contrast; the font is is also more legible than before. When users post links to their feed, the URL will now be easier to see so you can see where the content is hosted without having the strain your eyes. For those with bigger fingers, the Like, Comment, and Share buttons are now larger. Following in Twitter's footsteps, profile pictures will now be circular rather than square.

Facebook sees the comments section of its site as vital and has therefore made it easier for users to remember why they've dug in, in the first place by making it easier to see the original post that you're reacting too. Facebook then has a vested interest in dragging you back to the News Feed so it has made the back button more prominent.

Yesterday, Facebook announced that it plans to rollout its buy-sell feature, Marketplace, to 17 more countries in Europe soon.