Google has steadily kept introducing dark theme to many of its services over the past year. For example, Google Keep received dark mode support in May of last year for a few users. Over the last few months, dark theme was also rolled out to the Google app and later to Sheets, Docs, and Slides.

Today, the search giant announced that Google Chat has added support for dark theme on iOS and Android, available to all G Suite customers from today. Google cited heavy demand by users as the driving force behind today's release. It noted that this new look "creates a better viewing experience in low-light conditions by reducing brightness". 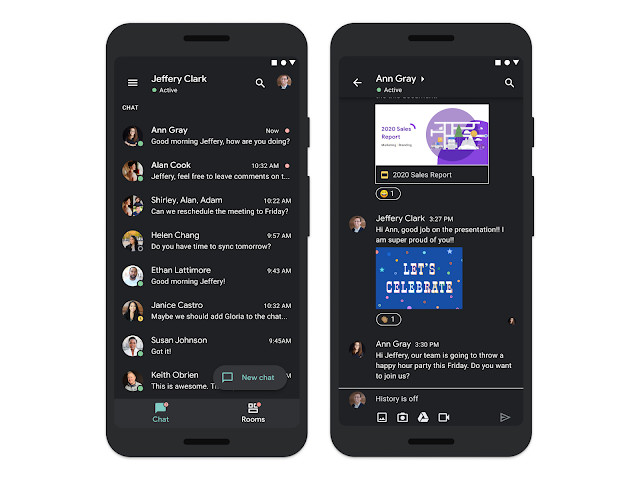 It's noticeable, though, that the dark gray shade is not uniform throughout as the navigation bar at the bottom adopts a slightly lighter shade. Another important change revealed by Google's screenshots above is the oval compose button. Prior to this update, that floating button had a circle shape with a plus sign.

The new experience will rely on the system settings of your Android phone. This supports only Android 10 or higher. For iOS users, the dark theme can be turned on by tapping on the hamburger menu at the top, going to Settings, and then heading over to the themes section. There's a selection of light, dark, and system default.