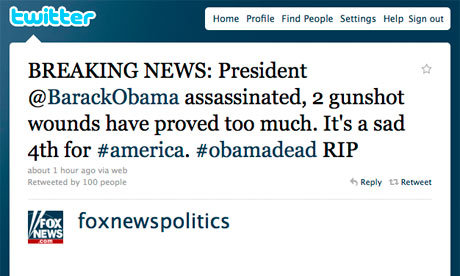 A hacker group briefly took over a Twitter page used by the cable TV news network Fox News and used it to report falsely that US President Barack Obama had been assassinated. The Twitter account for Fox News' Politics division relayed that message earlier this morning, according to The Guardian web site. The page reportedly has over 33,000 followers. The Scriptkiddies group has taken responsibility for the attack according to The Next Web site. The group revealed its involvement via its own Twitter site but that account has been suspended by the company, as has a second Twitter page set up by Scriptkiddies.

Another web site, Thinksb.com, claims to have interviewed one of the members of Scriptkiddies. The unnamed source claims that some of its members originally came from the hacker group Anonymous. The source claims that they want to work with Anonymous on their "AntiSec" movement. The source is quoted as saying, "Fox News was selected because we figured their security would be just as much of a joke as their reporting."

Whatever their motives or their selection of its targets, the fact that the Scriptkiddies hacker group chose to post up a false story on President Obama being killed is certainly disturbing to say the least. Indeed, as anyone who has seen the film In The Line of Fire can confirm, it is a federal offense to threaten the life of the President even if you don't mean it. You can bet the Secret Service will be looking into this hack attack.