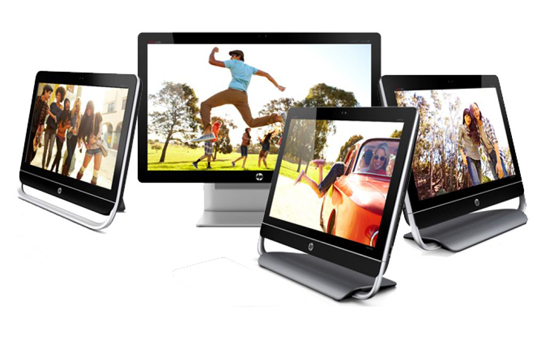 HP revealed plans for some portable Windows 8-based products a couple of weeks ago but today the PC company also revealed plans to offer four new all-in-one PCs that are also made to work with Microsoft's next operating system.

The company's press release offered details for the HP ENVY 23 and ENVY 20 TouchSmart PCs, both of which will have 10 point touchscreens for their respective 23 inch and 20 inch displays. Both all-in-one PCs will have up to three TB of hard drive storage, Intel processors, options for SSDs and Beats Audio.

Both will be released in October with the price of the HP ENVY 23 starting at $999 and the EVNY 20 starting at $799. HP will also launch a budget-themed all-in one PC in October, the HP Pavilion 20, with a price starting at $499.

The high end Windows 8 all-in-one PC will be the SpectreONE, which some people believe has a keyboard that mimic's one from Apple. As far as the SpectreONE, it will have a 23.6-inch screen. While the screen is not touch enabled, HP is offering a wireless trackpad that will let users access the Windows 8 "Modern" UI.

The PC also has a dedicated NVIDIA graphics card, along with NFC technology, two USB 2.0 ports, two USB 3.0 ports and more. The HP SpectreONE will be released in November with a starting price of $1,299.