Imagine a world where Half Life 3 was released as a micro-transaction filled, browser based city building game, where Team Fortress 2 requires ridiculous Origin software to run, and where Steam sales are shunned like the love child of Atari's ET and Superman 64.

If that sounds like an alternate universe, think again; it could've been reality, had EA managed purchased Valve. As crazy as that sounds, two anonymous sources 'familiar with the matter' told the New York Times that they've been trying to do it for years. 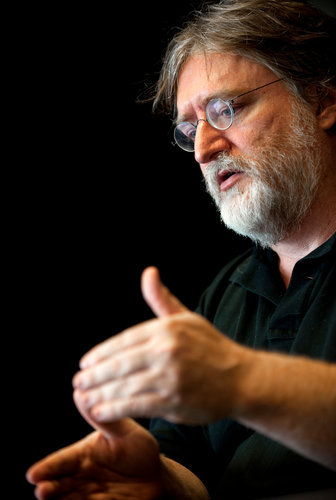 We can only imagine the response they got from co-founder Gabe Newell, even if they were offering a billion dollars (at the very least). Valve's managing director says that it's way more likely that the company will 'disintegrate' before saying, "Let’s find some giant company that wants to cash us out and wait two or three years to have our employment agreements terminate."

That's good news for Valve fans. Newell has the guts to go out and defend the company he helped build, even if it means going up against the likes of Microsoft. Valve is one of the paragons of modern gaming, and we really hope that they never get swallowed up by another company, and that it'll be a long, long time before they disintegrate.

Via: Develop Online
Source: The New York Times | Image via Stuart Isett for the NY Times