Dedicated maker boards like the Raspberry Pi have been around for a while, however, a similar solution for the robotics sector has yet to surface, until now. Polish company Husarion seeks to address that with its latest-generation development board for "Internet-connected automation & robotics devices".

For those not familiar, Husarion was founded in 2013 to offer a "fast prototyping platform for consumer robots". In 2015 it managed to fully fund its first-generation RoboCORE controller via Kickstarter. Now, it has improved on that platform with the CORE2.

The new board comes in two different flavours, the CORE2 and CORE2-ROS. The first is a low-power cloud-connected "real-time computer", powered by an ARM Cortex-M4 CPU, has 42 I/O ports, and supports up to 4 DC motors and 6 servomechanisms, as well as having a built-in Wi-Fi module. The second is meant more for autonomous robots, and features a "Raspberry Pi 3 ARMv8-powered board layered on top", and a pre-installed custom Linux image which includes a set of tools called ROS (Robot Operating System), geared precisely towards devices of this type.

Regarding the release of this newest platform, Husarion CEO Dominik Nowak, stated:

"We are on the verge of a consumer robotics revolution [...]

Big industrial businesses have long been utilizing robots, but until very recently the consumer side hasn't seen that many of them. This is starting to change now with the democratization of tools, the Maker Movement, and technology maturing. We believe Husarion is uniquely positioned for the upcoming boom, offering robot developers a holistic solution and lowering the barrier of entry to the market." 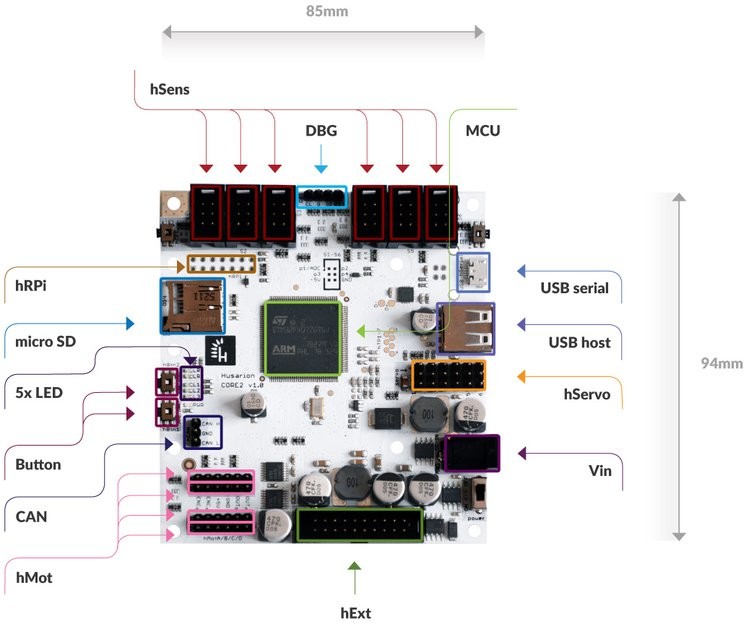 Some of the key points emphasized about this latest board, are:

To control these two variants of the CORE2, users can write code via Husarion's Web IDE or by making use of the relevant Visual Studio Code extension. To control the CORE2-powered device, users can take advantage of the Husarion cloud, which will allow them to "update firmware online, build a custom Web control UI and share controls of their device with anyone."

A short presentation video goes over the main features:

The Crowd Supply campaign aims to raise $10,000 dollars and is scheduled to run until August 6 at 04:59 PM PDT or 11:59 PM UTC. The CORE2 can be purchased for $89, while its more powerful sibling, the CORE2-ROS can acquired for $99. Orders placed today will ship on September 15, with free shipping within the United States and $8 and $10 shipping - for the CORE2 and CORE2-ROS, respectively - for worldwide buyers.