Independent industry analysis firm IDC has published its latest quarterly figures for the global smartwatch market, revealing a sharp downturn in shipments - the first time this segment has experienced a decline.

The main reason for this was a spectacular fall in Apple Watch shipments, which plummeted by 55% year-over-year (YoY), down from 3.6 million to 1.6 million in Q2 of this year. Every other smartwatch vendor in the top five saw significant YoY growth. 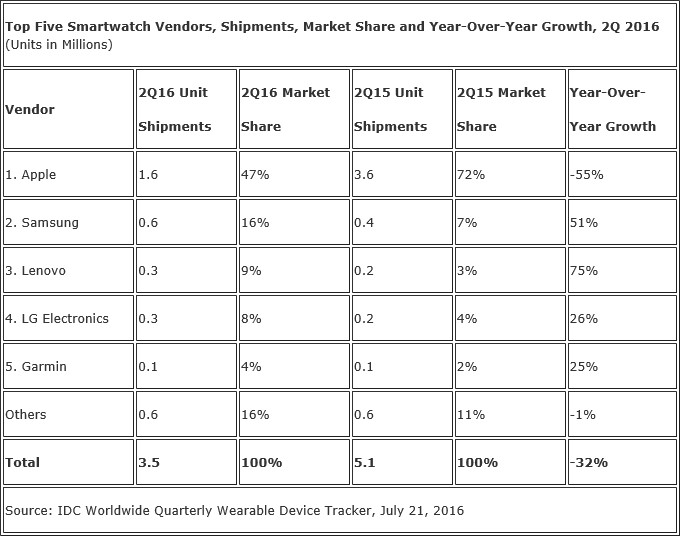 Despite the huge decline in shipments of its Watch, Apple remains the largest smartwatch vendor by a considerable margin, with almost three times as much market share as Samsung, in second place with Q2 2016 shipments of 600,000 units.

IDC observed that Lenovo has a market advantage thanks to "the Motorola brand as it continues to be the smartwatch of choice for those interested in Android Wear-based circular displays".

The steep slide in smartwatch shipments is sure to raise fresh concerns over the viability of this emerging market segment - but it's important to view these figures in a broader context. Jitesh Ubrani, senior research analyst for IDC Mobile Device Trackers, noted:

Apple still maintains a significant lead in the market and unfortunately a decline for Apple leads to a decline in the entire market. Every vendor faces similar challenges related to fashion and functionality, and though we expect improvements next year, growth in the remainder of 2016 will likely be muted.

It's similarly important to consider the background to Apple's sizeable decline in Watch shipments. IDC highlighted this, pointing out that "the year-over-year comparison is to the initial launch quarter of the Apple Watch". A new version of the Apple Watch is likely to be unveiled this year; IDC expects that, "along with updates to watchOS, [the new Watch] could help drive existing user refresh and more importantly, a new wave of first time buyers".

So it's not entirely surprising that Apple Watch sales have fallen year-over-year, given that a new model is rumored to be approaching, although the scale of that drop will certainly have raised a few eyebrows. With Apple's vast share, its decline has impacted considerably on the wider market, but the arrival of the 'Watch 2' is expected to lead to a substantial rise in overall shipments, although it seems it will be a while before that happens.